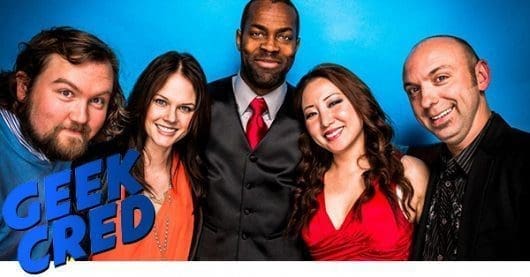 Do you have GEEK CRED?

​You know that executive who works a few floors above you? He has a favorite comics store. Your college professor? He absolutely hits the comic store. Celebrities, athletes, fry cooks, your friend’s big sister, regional sales managers, the unemployed 36-year old still living at home… yes, even he… They all walk in and out of a comic store near you on a weekly basis.The comic shop has become the new melting pot of our society. Those people, US people, are who GEEK CRED is about… and for.

Quite simply, GEEK CRED is a new workplace comedy in the vein of Parks & Rec, Brooklyn 99 and It’s Always Sunny in Philadelphia, but set in the fantasy-fueled, manic environment of a comic book store! A store brimming with ne’er-do-well employees and unhinged customers. If you’ve seen any of the shows listed above, then you know the kind of fun show they’re making. When they say the show is being made BY comic fans, they mean it. The entire cast; Michele Boyd (Team Unicorn, The Guild, Battle of Los Angeles), Wes Robertson (Blunderkind, Hell and Mr. Fudge), Damion Poitier (True Blood, Dollhouse, Marvel’s The Avengers) and Miley Yamamoto (How to Rock, Retcon) and director and creator Daniel Beals (Sexy Nightmare Slayers, Old Rivalry, Mediating Kidnapper); every one of them has read comics for a combined total year count of two Jack Kirby’s. If not more! And what’s more, they’re asking you – the total of all FANDOM – to help us get the show made. You don’t get more legitimately BY FANS than Geek Cred. Geek Cred is also going to be shot in a “real” comic book store, The Comic Bug in Manhattan Beach, California.

Funding levels range from $5 “Geek” Cred, all the way to $5000 “Executive Producer” Credit. As with all crowd funded projects, each funding level comes with it, its own gift for the donation. Give them ten bucks? You get some cool exclusive wallpapers, an email subscription and your name on the wall. Got a grand to spend? You are an Associate Producer with your name on the credits of one episode of your choosing, even being listed on IMDB! The gifts vary of course with each level, and the higher levels get the lower level gifts, per usual.

“We’re making the show we want to make, and not only will it stand up to everything you’re watching on television, but it’ll stand tall as a show FOR us all. A love letter and a painful, yet hilarious, poke at the ribs. Something every upstanding consumer needs from time to time. Geek Cred is the culmination of lots of creative people coming together to create something fresh and funny.

We’d love for you to be part of that team. Check out the rest of our site for videos, profiles and information on how to help make the show a reality. Geek Cred. Get some.”

To learn more about their Indiegogo campaign follow this link HERE and see how you can contribute.