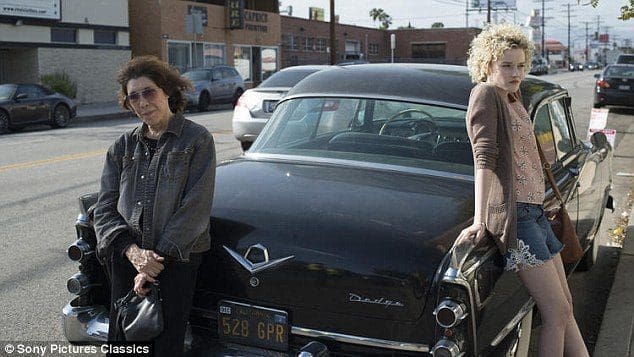 When I walked into the theater to see Grandma, I expected a little indie film that took me on a misadventure to fix a young teen’s poor judgment call. What I got was a personal punch to the gut on several levels, and you know what? I liked it. The film really hit close to home as it zeroed in on the fact that we can’t always let go of the past.

Sometimes our past sticks with us so tightly and so firmly that it greatly affects those around us, often in negative ways. In this instance we see holes torn in the lives of family members, past lovers and friends all because our main lead can’t escape her past. This is really just one aspect of the movie, as the supporting actress’s story is the real catalyst for the turn of events that force the main character to deal with her issues.

One of the aspects I really enjoyed about the film was that Elle Reid (Lily Tomlin) is gay. This just kind of fell into the background as the film went on, which to me is really great because we as a society have come so far in our acceptance of people’s beliefs and choices, that it no longer stands out to us as individuals. This movie really spoke to me and got me thinking that maybe it is time for me to let go of the past and start looking forward. We’ve got so much to live for right in front of us and we shouldn’t let our past losses or hurt make us blind to our present and future. I love when a movie comes along and changes your perceptions. Oh, did I mention this movie is a comedy?

Grandma is written and Directed by Paul Wietz. The movie has an abundance of stars that do a good job of keeping your full attention toward the screen at all times. The story unfolds as Sage (Julia Garner), a young teen, discovers she is pregnant and decides to ask her grandmother for monetary aid so she may secure a medical procedure. Elle Reid, Sage’s grandmother, is a semi-famous poet who becomes determined to help her grand-daughter while supporting her choice in the matter.

I don’t think I expected as much out of this film as it ended up delivering. Lily Tomlin really brought the character of Elle Reid to life in a manner that only Lily could. You can tell right away that Elle has seen some loss and has not let go of it. The woman is gritty and rough but has a warm center. She absolutely takes no trash as she marches through this film trying to get the cash for her grand daughter’s abortion. It’s an enjoyable human adventure that takes us through some very heavy topics such as death and abortion, while somehow keeping it up beat. It executes this flawlessly with a mix of high and low-brow humor. I’m really surprised at how light the movie felt considering the topics, that’s really no easy feat.

I have to touch on the supporting cast as they breathe life into this story as much as any of the main actors. Sam Elliot, if you don’t know who this actor is, you should. The character he plays is Karl, one of Elle’s past lovers. He comes across as a gentle man with a good heart, one that is still vested in Elle. His part in the film brought out the most emotion for me as you could feel it pouring off the screen.

Judy Greer is another actress you might be familiar with as she most recently starred in Ant-Man and Jurassic World. Her role in the film is Elle’s most recent lover. Even though Elle is pushing her away, she still tries to love and support her. You can easily see the emotion Judy puts into the role, it’s very obvious that she cares about Elle. I also want to mention Marcia Gay Harden who stars as Elle’s daughter and Sage’s mother. Her attitude in the film is a direct result of Elle’s character and choices, which in turn created Sage in her present form. You can tell that they are related simply by the life choices they made earlier in their lives, and how it affected the others.

The film is littered with little treats that speak on the feminist movement. I could see how they might perk an interest in learning more after the movie concludes. This is well executed as it never becomes the focus of the film. I often felt as if a little window was opened up in the life of Elle Reid, as Paul Wietz has allowed us a glimpse inside. Abortion is a huge topic and can be a dark place for those that have gone through it. Grandma hits this head on and allows us to see it from a human standpoint, shows us how our choices can affect others and how we need to close the previous chapters in our lives if we are going to successfully move forward with the strength and vigor that we have inside of us as part of the human race. Many have dealt with a ton of pain in their lives, and often let this shape and change us as we move forward. In this film we get to see this first hand and watch as the characters grow and learn as they begin to let go and move forward, all while somehow remaining a light, uplifting experience.

When I left the theater I felt pretty darn good about myself. I saw how through the support of others and letting go of the past can lighten our burdens. I can’t recommend Grandma enough if you are a fan of indie films. Hopefully you are not offended easily, Lily cursed more times in the film than I did when I was in the United States Army. It worked though, keeping the film light and grounded as it toppled some tough issues. All in all, I enjoyed the ride Lily Tomlin, Paul Wietz and the entire cast took me on.

Synopsis: Self-described misanthrope Elle Reid has her protective bubble burst when her 18-year-old granddaughter, Sage, shows up needing help. The two of them go on a day-long journey that causes Elle to come to terms with her past and Sage to confront her future.

The House With a Clock in It’s Walls | Movie Review