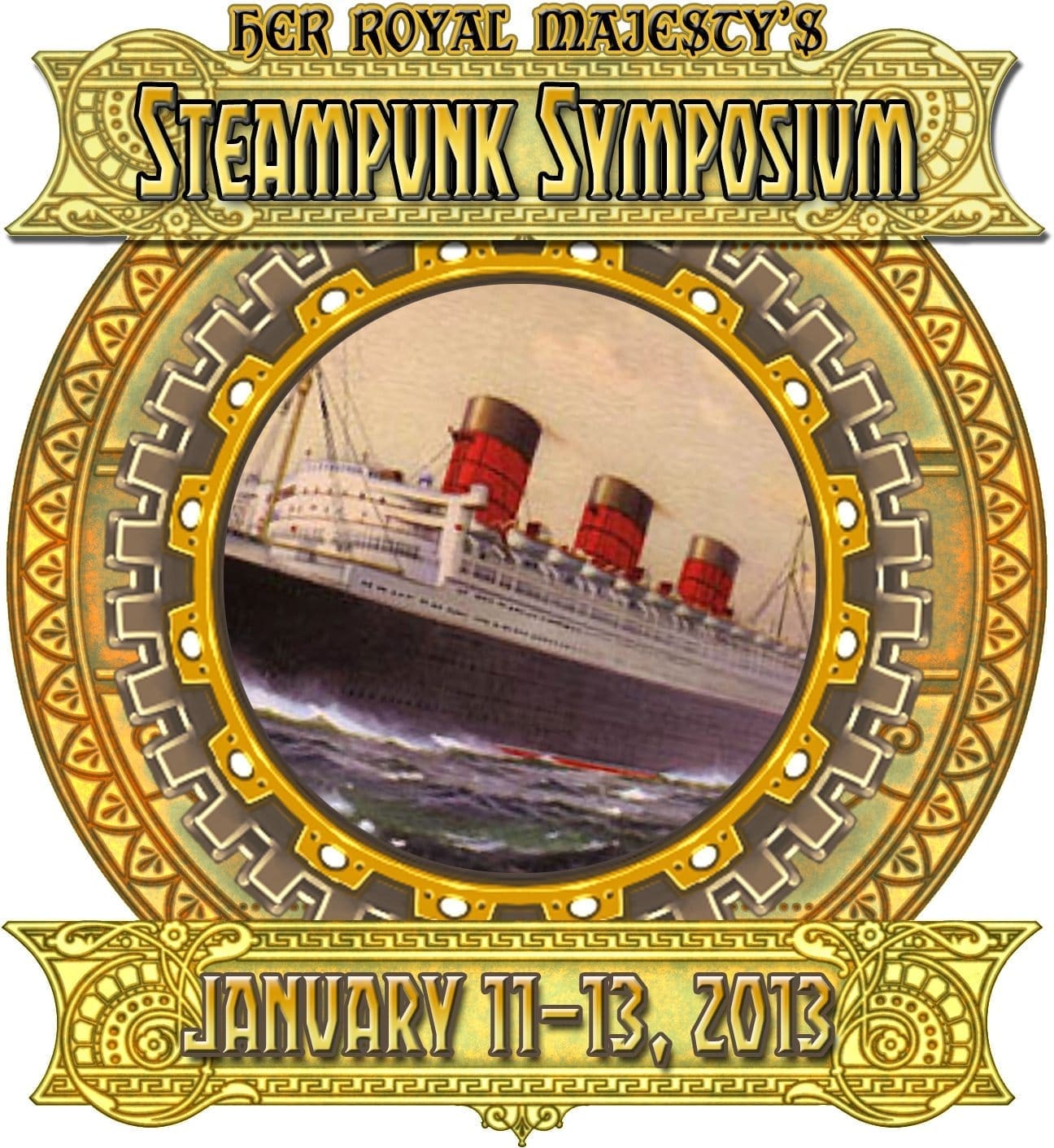 Her Royal Majesty’s Steampunk Symposium aboard the Queen Mary in Long Beach, CA is less a convention and more of an experience.  It is like a long sea voyage full of glamour, amusements, good food and well dressed fellow voyagers.

For 3 days the steampunk community descended upon the Long Beach Pier bringing to life a past that never was.  And how fitting they all look strolling along the decks in their finery as they follow their maps to any number of destinations aboard the beautiful old ship – A concert by Steam Powered Giraffe, a Murder Mystery within the lower decks, a panel on the latest steampunk series, a Pirate Battle, a grand Time Travelers Ball overseen by Queen Victoria and her court.

The master behind this organized mayhem is Kim Maita of Moche Productions. A travel agent who works exclusively with the gaming community she spent the night on the Queen Mary before going out on a board game cruise and wondered why someone hadn’t held a steampunk event there before.

She spent the next year going around to steampunk conventions to see how they were run and to get feedback on the idea of holding an event on the ship before diving in to it. “I think it’s a very interactive experience.” She said when I had the chance to speak to her recently. “I like to call it a major convention with no decorating required!”

Only in its second year the Steampunk Symposium has nearly doubled in size. And it is attracting some major talent to it. Steam Powered Giraffe’s show was sold out weeks ago and on the first night of the convention the comedy dinner theatre they were a part of ran to nearly 4 hours. Unwoman played the first dance at the ball. Girl Genius creators Phil and Kaja Foglio were on hand as was author David Lee Summers. Several steampunk series were there to present sneak peaks of what was to come, from Bruce Boxleitner’s Lantern City to Matt King’s World of Steam.

“We are a convention that is very heavy on entertainment. I think the shows are an amazing part of the event. I’m very excited about the screenings we are having this year. Most conventions have a film festival and it’s all completed works. You don’t really get to see the new stuff that is coming out. This is more like a preview special. People get to see new things”

When asked about the future of the event Maita said she wanted to continue to see the numbers grow. “I’d like to have an overflow hotel.”

For more information visit the official website of Her Royal Majesty’s Steampunk Symposium: