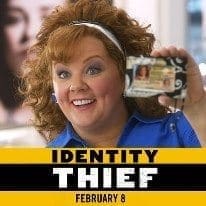 I have never had my identity stolen *knock on wood*. I’ve been to the deepest reaches of the internet and the worst thing that’s ever happened is spam mail. My last girlfriend, bless her heart, had her stuff stolen all the time just for visiting sites like Groupon. This isn’t to say she’s reckless, it’s just the luck of the draw sometimes, as it is with Jason Bateman’s character, Sandy Bigelow Patterson, in Identity Thief. As the trailer makes clear, Sandy has his identity stolen by Melissa McCarthy’s character, uh, I don’t even remember her character’s name because she uses so many aliases she doesn’t even remember her own name, but I believe she went by Diana. She poses as a credit card company employee offering, of all things, extra identity theft protection, to gain Sandy’s info. Once she’s got it she goes on a shopping spree, as all identity thieves do, purchasing everything from dozens of blenders to massage chairs to Seadoos. Sandy eventually catches on when his credit card is denied at the pump and is alerted to Diana’s whereabouts by an appointment reminder call from a salon in Florida. Because police in comedies are so inept Sandy decides to travel from Colorado to Florida to apprehend Diana and bring her back himself to face justice. Sounds exciting, huh?

Identity Thief follows a proven road trip comedy formula, but as far as I’m concerned, if it aint broke, don’t fix it. Bateman and McCarthy are able to bring enough of their own skills to make it stand out against other throw away comedies. If handled with lesser skilled hands Bateman’s character might have slipped into the stereotypical pushover kind of guy, yet his character owns the situation and took charge of every moment and always felt in charge. McCarthy, on the other hand, isn’t exactly handed comedic gold, but she makes it her own. Her character makes the obligatory arc rather early in the movie, but manages to make her sacastic and bitchy all the same and surprisingly makes a dramatic turn when all the chips are down. There are still throwaway villains played by the likes of Robert Patrick, Genesis Rodriguez, and Tip “T.I.” Harris, but they are nothing compared to the pseudo-villains from director Seth Gordon’s last outing Horrible Bosses, which also featured Bateman. Jon Favreau also makes a cameo appearance in pointless role as Bateman’s boss.

The script was written by Jerry Eeten and Craig Mazin. This is Eeten’s first major outing, but Mazin previously worked on The Hangover Part II and several of the Scary Movies and it shows. There is a lot of physical comedy in this movie. It is no slapstick style comedy that you see in the Scary Movie‘s and is more subtle and a lot of times played to Diana’s detriment. There is one particular running gag that was used very nicely (and some people at my day job would appreciate) and that is Diana’s love of throat punching. There is no less than five throat punches in the movie, Bateman’s character is the recipient of several, and it was surprisingly funny. The trailer places great emphasis on this and I thought it would get annoying, but it was surprising every time it happened, however, I’m waiting for every comedy after this to follow in Identity Thief‘s footsteps at which time it will become overdone.

Director Seth Gordon has a proven track record, starting surprisingly with a documentary and several TV shows and continues that streak with Identity Thief. When directing a comedy, especially one with so much physical humor, camera placement is crucial and often times can determine how funny a joke is, or even be funny in and of itself. Gordon has had lots of practice with the shows he’s directed and it really comes through in his directing. At one point Sandy has to chase a bounty hunter that has stolen Diana down the highway and for a comedy the car chase is actually pretty intense. Some action movie directors should take notes on this scene.

Identity Thief takes a while for it to get out of first gear, but once it does its pedal to the metal all the way to its out of place ending.

Synopsis: Mild-mannered businessman Sandy Patterson travels from Denver to Miami to confront the deceptively harmless-looking woman who has been living it up after stealing Sandy’s identity.