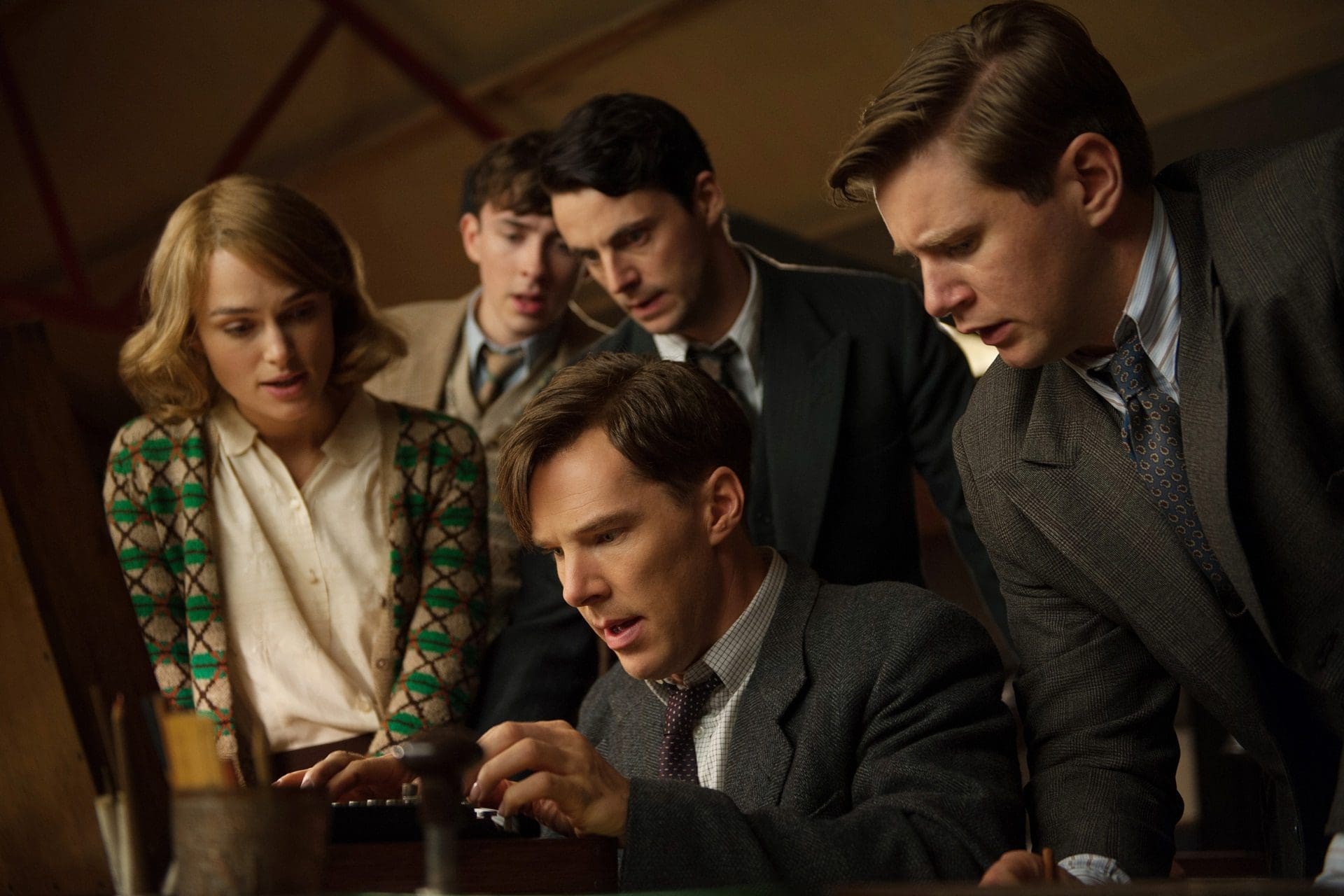 Not since 1999’s American Beauty have I seen a film that blew me away as does The Imitation Game starring Benedict Cumberbatch & Keira Knightley. Morten Tyldum directs this Weinstein filmed based on Andrew Hodges biography of Alan Turing, the father of the digital computer, artificial intelligence, and computer science engineering. The film, with Cumberbatch as Turing, details the years in which Turing worked at Bletchley Circle, the British code breaking center, to invent the first computer that he used to crack the German’s Enigma machine that directly led to the defeat of the Axis of Evil in World War II.

Alan Turing was a brilliantly eccentric mathematician (in a hilariously early conversation with the naval Commander Denniston he compares himself to Einstein) and logician who was recruited early in the film to work on cracking Enigma. He was thrust onto a team that includes Hugh Alexander (Matthew Goode) and Downton Abbey’s Allen Leech who plays another cryptologist. After a very aspy Turing fires two other members of the team (he contacted Churchill himself by letter to implore that he let Turing be team lead, to which Churchill agreed), they needed new (read: smarter) members of their team to help manually decipher the code that has “159 million million” possibilities and changes every 24 hours. This is where Joan Clark (Keira Knightley) enters. For anyone who’s watched the excellent BBC show Bletchley Circle, this shouldn’t be a surprise, but given this is 1939 not every male is happy with a smart lady. Knightly and Cumberbatch play well off each other and clearly love each other deeply, albeit (and this is a biopic folks, so no spoilers after 70+ years) Turing was gay. The narrative runs mostly through the war years from Turing’s joining Bletchley until Armistice Day, but Tyldum deftly includes scenes from Turing’s time as a boy at boarding school where he not only is introduced to cryptology but also meets his first and only love and includes scenes later in life when he is robbed and subsequently convicted of being a homosexual (illegal in 1952’s England).

Portions of the film are voice-overed by Cumberbatch (who couldn’t sit for hours just listening to him speak?) through a seamless blending of actual WWII footage with modern cinematic magic to drop the viewer in the midst of the blitzkrieg’s across Europe. The early years of Turing schooling are heartfelt as his only friend and love Christopher befriends him and gives him a book on puzzles. The later years are much darker as he’s convicted of being a “puffer” after Detective Nock (Rory Kinnear) is suspicious of Turing after the mathematician’s flat had been burglarized. The framing of those two time periods did not detract from the action at Bletchley, heck his voice-overs are directed at Nock himself as they play cat and mouse in the interrogation room of the precinct (oh what would I have given for him to break into “Sherlock” to outwit Nock and not be convicted). But we all know this was not to be; Turing was convicted and chose chemical castration over imprisonment so he could continue to work on building and developing the world’s first modern computer (aptly named Christopher after his brief boyhood companion). A year later, just short of age 42, Alan Turing was dead in an apparent Cyanide suicide.

Actor Alex Lawther who portrays Turing in the early years at school when he was bullied because of his intelligence and lack of any social skills whatsoever does a fine job of matching the nuances of the character as a young man. He exudes quirky genius and clearly builds a foundation for the man Turing was to become. His brief relationship with Christopher demonstrates his ability to care for humankind while also explaining the obsessive “relationship” he has with the computer he later builds (and continues to perfect until his death) and names after his first love.

The relationships he later builds with his team of code breakers at Bletchley are both at once cumbersome and caring as he understands the only way to defeat a machine is with another machine. (Hence his creation of artificial intelligence along the way.) Alexander, who clearly hates Turing early on since he usurped the role of team lead, slowly becomes his biggest defender as the project hangs in the precipice before Turing cracks they key needed to end Enigma. The relationship that develops between Cumberbatch, Goode, Knightley, and Leech in particular makes this two hour film worth every second.

Also, throughout the film Mi6 agent Steward Menzies (Mark Strong) watches in the wings as the team tries to crack the code. Menzies relationship with Turing was profoundly complex but both men clearly understood the end game. It was a pleasure to watch these two on screen, especially in their scenes alone. Historically speaking, Menzies seems to’ve been much less competent (and this was only hinted at in one subplot), although I am fine with how Strong played this character.

Leaving the theatre, I was speechless. The profundity of how much this man changed the world, the fact that this important historical situation was top secret for half a century, and that Turing was essentially killed for being gay was only part of what truly struck me. The deep-seated love for Turing’s story played so perfectly by a team of talented actors lead by Graham Moore’s gorgeous screenplay made me realize we’ve entered into Oscar season, a season where the artists give their very souls to the masses. profundity

In 1941, in South England a half a dozen crossword enthusiasts won the war and changed the world. This is their story.

About The Imitation Game

Synopsis: Based on the real life story of Alan Turing, the father of Computer Science and the modern computer, the film covers the darkest years of World War II as the British allies try to crack the German’s decryption. Turing and team must race against time to crack the Enigma machine’s encryption and end the war.

The film opens in limited release Dec 12, 2014 at Harkins Camelview 5 in Scottsdale, AZ.

Wonderful review! But just fyi: it’s ‘poofter’ not ‘puffer’. I know, it’s not pronounced that way, but it is English 😉

“INTO THE STORM” Movie Review