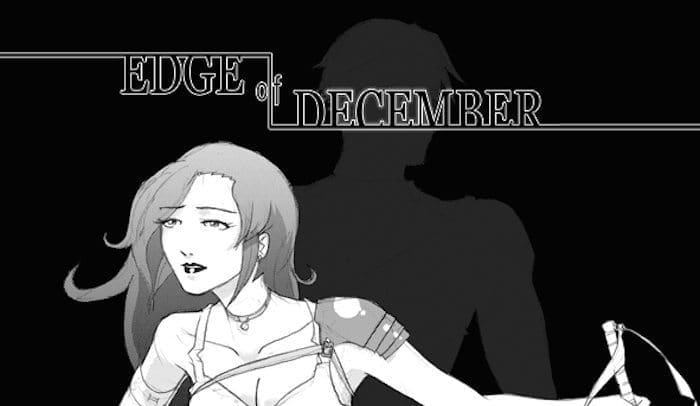 Independent Streak is a new feature over here in the GNN Comics Department designed to spotlight independent comics. For this inaugural issue, I met up with Glenn Kitchell, a fellow Tucson native and artist of the web comic Edge of December.

GNN: I’m here with Glenn Kitchell, he’s the artist on Edge of December, a web comic that, as of last year, became a successful Kickstarter and transitioned to a hardcover collection. Glenn, what is Edge of December all about?

Glenn Kitchell: It’s this story of these three brothers who have, through life and all the bad things that have happened to them, formed this family. They’re not actually brothers but they get each other’s backs like that. They’re running around trying to teach people how to live right and do the right things, stand up for the little guy, things like that, and to start a dojo in honor of their father’s memory. Well, there’s crooked politicians, mobsters, all sorts of bad people who are in their way and they have to make deals and make it happen and live in a real world for them.

GNN: I’ve noticed looking through your art there’s a lot of anime influence.

GK: Very much so.

GNN: In one of the panels I noticed a character sleeping on a Totoro pillow. So I was just wondering what’s your anime influence? What do you like?

GK: The biggest influence on me is [Nobuhiro] Watsuki. He’s the guy who did Rurouni Kenshin. Absolutely amazing artist and he got me into the whole realm that is anime and manga. I’ve been trying to learn from the best, make it a little bit my own style, try to do a little bit more western style too, and make it a little more unique. But it’s definitely Watsuki all the way.

GNN: So what kind of manga or anime do you enjoy? What kind of stuff do you like to read?

GK: I’m mostly into the manga because that’s what I have to read in order to do all of my studying. Studying, in air quotes. But recently I’ve been more into some of the weirder things, like if you’ve seen the anime Future Diary. It’s pretty insane. It’s very rated M; there’s murder and destruction and it’s pretty hardcore. The art is great and it’s got a lot of twists so I’ve been getting more into how to surprise people. I’m trying to bring some of that into my stuff without going rated M because we are very much a family friendly comic.

GNN: Definitely. So did your writing partner, Seth Swanson, bring you the idea for Edge of December or did you two collaborate on it?

GK: Actually the original creator, along with myself, is Greyson Ross. Back in college he said that we should make a comic because that’s what all the cool people were doing. So we came up with an idea and I was like, ‘Fine, we’ll make a comic. How about we do a comic about this assassin girl who tries to leave her little group and they come after her?’ He said, ‘Okay, so what should we add onto that?’ I was just throwing an idea out there, some random baloney, and it got turned into a comic. That kicked off the original comic Emerald Blades but then we had domain issues and we lost our dot-com. We had to restart the whole thing and we created Edge of December and only recently we got Seth Swanson on. He’s been on for about a year now and he has done some amazing things with the writing. I’m loving it so far.

GNN: How did you meet Seth?

GK: He is one of my brother’s college friends. Whenever I would go to visit my brother we would be hanging out with Seth as well. He’s the writer, he’s won several awards for short stories online and around the internet. He’s always been a fan of Emerald Blades and so I said to him, ‘Hey, do you want to do writing for us?’ He said absolutely, so that’s how we kicked that off.

GNN: Why did you choose to do a web comic format for Edge of December?

GK: It’s mostly about just getting it out there and making things happen two or three times per week. Originally, Emerald Blades was three times a week and Edge of December is twice per week. Having something that is alive and changing as you go, I think that adds a lot more dynamic feeling to the whole comic realm. As opposed to once a month there’s another 20-page chapter and that’s that. This is like every single day we can take into account all the things that we’re thinking, even with the writing, and look at what does or doesn’t quite work and adjust it as we’re going. And then we keep adding more and more content, things like our rants, gallery posts, and news posts. There’s always something new and interesting to see on the site.

GNN: You were saying you got to make some tweaks and adjustments to the comic as you were going along. Was that based off feedback that you heard from readers or was that based off of your own critique of the work?

GK: A little bit of both. We don’t like to take everything people say into account but we definitely learn from it as much as we can. So if something is a little bit weird we try and make it right. But usually when you sit down, you write a whole chapter. Seth will write a chapter then we’ll both go through and edit it and we’ll edit it again and then we’ll leave it alone for a month, then we’ll edit it again and then I finally start drawing it because we get caught up to that point. Well, at that point there’s some things you can draw in there to make it a little more to the moment, throw in modern references and things like that. Also, if you just leave it alone for a month, you come back and you notice there are some things that are weird. You tweak them and then the final product is way better than anyone can do on their own over just a weekend of writing.

GNN: When did the idea for the Kickstarter come up? Who was the one who said that you should turn this into a print book and use Kickstarter?

GK: Back in 2007, we tried to do our first hardcover anthology. We partnered up with this little company that was local in Rochester and we printed up the first book. That was a very limited production. It only had 100 pages and we were like, ‘this one is not quite right.’ It was bound very well though. When we got to the point in this story [Edge of December] where we had a complete saga that we wanted to put into the book, we decided to get this out there. We can restart, we can make a much higher quality book with a lot more pages and really just try and get the name out there.

GNN: I know the Kickstarter was successful since you have the print copies. How well did it do? What were you looking for and what did you wind up making?

GNN: Speaking of selling the books, where can people purchase them? I’ve seen you at the Tucson Festival of Books, Phoenix Comicon, so you’re definitely making the con rounds as it were.

GK: We’re doing pretty decent sales at all the cons, selling books and prints like that. Our books and all of our prints are available at our website. There’s just a store link in the top corner and you can click on that to look through our entire inventory.

GK: Yep. Through Amazon we have some of the smaller, periodical ones, so it’s like individual chapters. You can get those off of their website and they download right to your Kindle and whatnot. But on our website we have the DRM-free versions of the digital books. You can actually get the PDF, iBook, ePub, or MOBI files, put them on your phones and share them with your friends.

GNN: Have you thought about trying to contact Comixology at all? I know you do DRM-free which is not their policy. I wasn’t sure if that was a limiting factor or…

GK: No, I haven’t really looked into too many of those things yet. We’ve mostly been flying under the radar for the last few years and only recently have we pushed really hard for a more community connection orientation. It would be a good suggestion, thank you. It would be nice to use those services since they’re so robust.

GNN: Since Edge of December started out as a webcomic available, did you find any difficulty in persuading people to purchase the book rather than just going to the website? I know there are a lot of extras in the book; I was wondering if you wanted to talk about some of those extras.

GK: The average web comic reader is like, ‘Web comics are free,’ but people who really love the story are always interested in all the extra things we’re providing. We’ve got a whole bunch of stories that are in there. Seth wrote two short stories that cover the adventures of Baron when he gets separated from group. So we added that, we have a gallery section with a bunch of pretty artwork, and people who are into the comic usually love to help support us and keep us going. We’re very thankful to those people.

To help support Glenn Kitchell’s project, visit the official website for Edge of December at www.edgeofdecember.com. There are links on the page to purchase the hardcover of the comic, a forum to join, and of course, the comic itself is still ongoing, so new pages are posted every Monday and Thursday. You can also find Edge of December on Facebook, Google+, Twitter, and Deviant Art. Glenn also wants readers to know that he’s open to receiving e-mails with questions or comments about the comic. If you e-mail him, be sure to ask him for some of his great anime suggestions as well. Now go check out Edge of December and support a fantastic local, independent comic book.