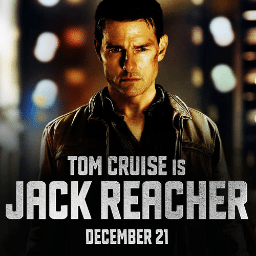 It’s morning. People are enjoying themselves along a riverside boardwalk. Some are going to work, others are just relaxing. Across the river a white van pulls into a parking garage. A man gets out, pays the meter, and walks to the edge. He pulls out a rifle and starts shooting. Sound familiar? It’s actually just a movie, the brilliantly timed holiday actioner, Jack Reacher.

That is the way the movie begins. After the shooting, where five people are killed, the shooter is easily caught. The only thing he asks for is Jack Reacher. Who is Jack Reacher? No one seems to know. Like no one. There isn’t even some general who’s like “don’t mess with that guy.” When Reacher shows up under some magical intuition he has to explain his own bad ass origin story, which could be BS for all these people know. Did I mention he’s a straight up homeless person? From this point on Reacher does nothing but tell mildly funny jokes and kick a lot of ass.

The pacing was very swift in this movie so I was so engrossed with everything going on that I didn’t even realize that it didn’t make a lot of sense. Even after it was over I was still into it, until someone else pointed out to me that the plot was a little confusing to say the least (thanks Chuckie). There is some mystery to it so I won’t give everything away, but the bad guy, played strangely by director Werner Herzog, was like some construction gangster. Most gangsters use construction businesses as a front for their criminal activity, but this guy uses it as a legitimate business. At least I think that’s what he was doing. The guy is also from another country so I kept expecting him to say “diplomatic immunity!”

Like I said mere moments ago the pacing is very swift and the fight scenes are awesome. Reacher’s fighting style was like a mix of Jason Bourne and Nolan’s Batman. He’s quick, precise and is very heavy-handed. He felt more deadly than Bourne because he looked like he knew what he was doing, he only throws punches because they are necessary. At one point there’s also a little car chase that is a tad bit too long and not tense enough. I found myself waiting for the next fight scene. If you’re wondering how many action scenes there are just watch the trailer, there’s a snippet from each one. Except the shot of that mountain exploding, what was that anyway?

Tom Cruise is excellent as always. Robert Duvall makes a little cameo towards the end that was probably the best part of the movie, but the rest of the players are mediocre at best.

If you’re a fan of the book, One Shot, then you’ll probably enjoy this because your brain will fill in the plot holes, unless of course the book is filled with them too.

Synopsis: When a gunman takes five lives with six shots, all evidence points to the suspect in custody. On interrogation, the suspect offers up a single note: “Get Jack Reacher!” So begins an extraordinary chase for the truth, pitting Jack Reacher against an unexpected enemy, with a skill for violence and a secret to keep.
Director: Christopher McQuarrie
Cast: Tom Cruise, Rosamund Pike, Robert Duvall, James Martin Kelly, Jai Courtney
Running time: 2hr 10min‎‎
Rated PG-13‎‎