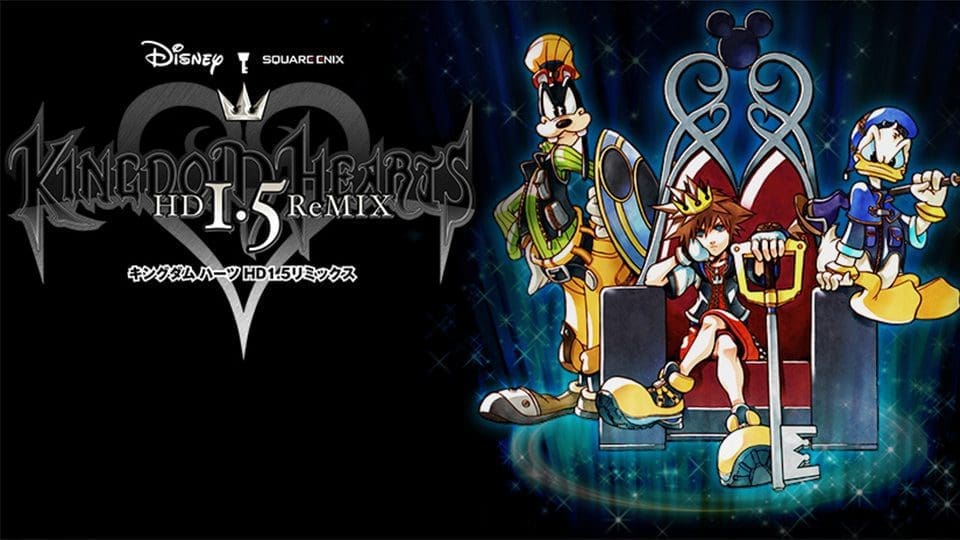 First off, allow me to clarify that this review will not be focusing heavily on gameplay, or even story as my reviews tend to. As this is a remake of games made between four to eleven years ago, most thoughts on the game’s controls, features, and story have been discussed to death. While I will touch on some aspects of it throughout this brief review, the main focus will be to address how the game’s have aged and/or been improved by an HD remake. Secondly, allow me just to come right out in the open and make it clear that I am a rather large fan of the Kingdom Hearts games, having played and beaten all but one of them on multiple occasions.

Now, onto that long rumored review I’ve alluded to:

For those of you experienced in the world of Sora, Donald, and Goofy, you may be thinking that the first title featured in KH 1.5 is one you’re experienced with. However, unless you took the time to import a copy from Japan sometime in the last decade, you would be wrong, as Kingdom Hearts: Final Mix was the Japanese re-release of Kingdom Hearts that was put out after the original American release, featuring additional Heartless, a bonus boss fight, new scenes, and assorted tuning changes to combat/leveling. While I do own Kingdom Hearts: Final Mix in its original Japanese release, I never actually played it; my lack of comprehension of Japanese barred my ability to play the game with any competence. Imagine my surprise upon hopping into the game and noticing that suddenly enemies that I had become extremely familiar with, suddenly featured changed color schemes. This of course is of lesser concern when compared to the changes wrought by an HD upgrade to the game.

Holy hell, let me just state that the above picture in no way does the game justice. Seeing the intro cinematic play was like a breath of fresh air, taking in just how crisp, vibrant, and overall colorful the game was. Kingdom Hearts was already a beautiful game, despite its age, but with updated textures and colors the game has taken on an entirely new life. Furthermore, the most impressive thing in the game, including the other two titles in the collection, is that 66 tracks from the games were re-recorded with live instrumentation, replacing the originals use of the Playstation 2 built-in tone generator. Having the beautifully orchestrated songs actually played by an orchestra adds a grandiose beauty to an already beautiful game.

The only downside to playing Kingdom Hearts: Final Mix is that the game is simply 11-year-old and it shows in the gameplay, primarily in the platforming and camera departments. After playing multiple sequels in the series, the most recent being Kingdom Hearts: Dream Drop Distance, it becomes noticeable of how bad the camera mechanics truly were in the game. Regularly you’ll have Sora lined-up to make a jump, only for the camera to randomly pivot as it gets stuck on a wall, sending you flying off in the wrong direction. Thankfully with KH: Final Mix the camera can now be controlled with the right-analog stick, which at least makes it somewhat more manageable.

Kingdom Hearts Re: Chain of Memories

The original Kingdom Hearts: Chain of Memories holds a special place in my heart (ha!), being the first game that ever led me to purchase a new system — the Game Boy Advance SP — simply for one game. I only played a single game on the system, one that I never actually finished. That’s right, despite my affection for the world of Kingdom Hearts, I have never completed the series’ first handheld sequel. Feel free to shun me if you must.

Are we done shunning? Good.

Back in 2008 Square-Enix released a remake of the handheld title, conveniently titled Kingdom Hearts Re: Chain of Memories for the PS2. This game featured updated gameplay based around the preexisting card combat style, but with new 3D locales based off of Kingdom Hearts II’s engine. The title also included newly rendered cutscenes to help flesh out and give voice to the previously unheard members of Organization XIII. Despite the more recent release of KH Re: CoM, the game still pops with a fresh new look. The animations of the characters in cutscenes flows far more organically with the fresh coat of paint than it ever did before, which is especially welcome considering it is the title’s 2nd re-release.

The combat and gameplay remains largely unchanged, which works wonders as KH Re: CoM stands apart from every other game in the series, with its card-based combat system that relies of deck building and situational versus the rest of the series more standard action-RPG fare. Despite not being a fan of the combat design nearly a decade ago, I find myself enthralled now with the intricacies of building decks to suit an assortment of situations. Even though the story is one-part rehash of Kingdom Hearts to one-part new story about memory loss and finding those we loved, it comes across in a new, unique way when played following Kingdom Hearts: Final Mix. The separate, split-story feature of the series gives an opportunity to see the world of Castle Oblivion from the perspective of both Sora and Riku, which is as welcome of a change now as it was ten years ago.

What do you get when you take arguably the weakest link of the Kingdom Hearts series, strip if of all combat and gameplay, then upgrade, animate, and voice a series of cutscenes? Well, you get an awesome movie version of one of the best stories in the game’s universe, that’s what! Kingdom Hearts 358/2 Days, originally released in 2009 for the Nintendo DS as the beginning of a handheld “trilogy” ultimately featuring Birth By Sleep and Re: Coded, was by no means a terrible game, but when compared to some of the other handheld titles in the series it can be found wanting in many departments.

While originally intended to receive the full remake treatment, ultimately the time needed to do complete overhaul of the DS game proved too long, leading to the game being turned into a roughly 3 hours film featuring explanations of most of the missions’ story elements. This system, while misleading when compared to the box’s claim that all three games are ‘playable’, has its advantages as it let’s both fans of the series and newcomers get great exposure to both an interesting point in the Kingdom Hearts lore, as well as information on fan-favorites Roxas and Axel, and the rest of Organization XIII. It may be a letdown to some, but it works with the collection. The most notable aspect is that this game is easily the most visually pleasing of the trio of titles, likely due to focus being directly solely on the game’s new cinematics with the possible drawback of the gameplay.

The One to Open the Door…

Kingdom Hearts 1.5 HD ReMIX functions both as a great nostalgia piece for long time fans of the series, while being a great point to dive in for newcomers to the series. The upgrade to HD visuals, with the inclusion of orchestrated music gives the trio of games a new life for a new generation, while starting the process of whetting people’s appetite for Kingdom Hearts III at some future point in time. The question is not whether you should purchase the game — if you’re a fan you probably should consider it — but what will likely be included in the unannounced Kingdom Hearts 2.5 HD ReMIX Paopu Fruit Daquiri Edition.