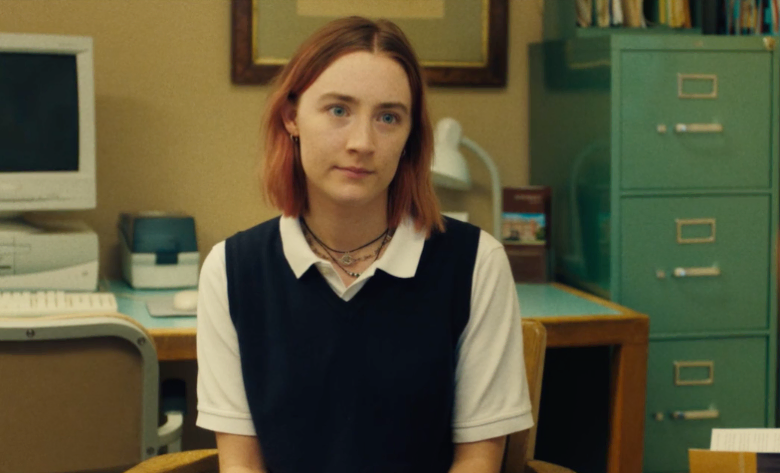 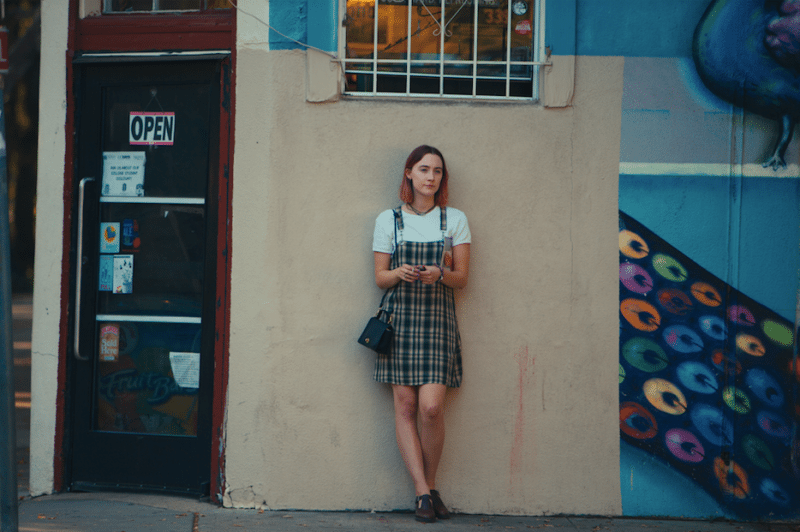 Lady Bird is a unique look into the life of a teenage girl in California in the early 2000’s. With a seasoned cast starring Saoirse Ronan and Laurie Metcalf, this indie gem is a quirky reminder that the cinema is not just about bloated budgets and over the top effects; at it’s heart it is telling stories. Lady Bird is an unconventional story, as it follows its protagonist through her senior year of high school. While other films such as Juno and The Edge of Seventeen date themselves in their attempts to mimic current trends, in Lady Bird the usual slang and teenage tropes take a backseat to an authentic character experience, which we’ll delve into in this Lady Bird review.

The film takes place in Sacramento California in 2002/2003 where the division between upper middle class and lower middle class is stark. Christine “Lady Bird” McPherson (Saoirse Ronan) is a high school senior desperate to get out of her hometown and experience a more cultured life. Her self-centered views clash with her overworked mother, Marion (Laurie Metcalf), who has become vigilant in maintaining their outward appearance in an attempt to better her daughter’s life. While they live in a lower class part of town, Lady Bird attends a prestigious Catholic school in the rich neighborhood. As Lady Bird navigates her senior year, her turbulent relationship with her mother increases as both are strong-willed and wrapped up in their own problems. While Lady Bird’s problems are centered around crushes and friendships, her mother faces financial strain as her husband loses his job. Things come to a head between the mother and daughter when Lady Bird applies to east coast colleges instead of in-state, and their relationship is never fully healed.

At the heart of Lady Bird is the strained relationship between mother and daughter, and how life, missed opportunities and personalities can drive a wedge between two people. Christine is just beginning the path into adulthood that most teens struggle with; dating, losing friends and gaining new ones, and self identity. At that age it’s very easy to be self-centered and unaware of the world around you, as she slowly discovers throughout the film. At the same time, there is a clash of personalities and a mother who is so wrapped up in trying to make her daughter’s life better, that she is oblivious to her daughter’s needs. As Christine ends her senior year and goes to college, both mother and daughter realize their selfish mistakes, but it almost seems too little, too late.

The visual style of the film is a perfect blend of indie b-roll and lingering shots of the characters as they react to their decisions. Set in Sacramento, the locations feel authentic and the characters feel right at home in the Northern California environment. The contrast between the lower middle and upper class is shown through the visuals and dialogue, as often times characters reference the train tracks that divide the two worlds. The film is inspired by Greta Gerwig, the writer and director’s personal life growing up in Sacramento, so it feels very true to its nature.

Saoirse Ronan does an incredible job of portraying a teenage girl who is desperate to be part of the “cool” crowd, but struggles with her own identity, and the chemistry with Laurie Metcalf as her mother is electric. The scenes between the two are emotionally tense, as both women try and fail to understand one another. Other supporting cast members help build the sincerity of this world, but the dynamic between the two leads steals the film.

Lady Bird is a film that will connect with women who understand that the relationship between mother and daughter is unlike any other. There are those who are best friends with their moms, but unfortunately not all families connect. While a parent can love their child, they can still dislike them. This film connects with those who lived through 9/11 during their formative years, and how the state of the world and economy created a vacuum of disillusionment for young Americans. Despite its time capsule of the early 2000’s, Lady Bird feels very modern in its quirky dialogue, issues of parenting, as well as its display of teenage angst. It also doesn’t rely on dated slang and pop culture references to appeal to its audience. In the end, it is a heartfelt and genuine story with characters whom you wish you could continue to watch as they grow.

Synopsis: A coming of age story centers around a teenage girl as she navigates her senior year of high school and the strained relationship with her mother. As the year progresses, Lady Bird discovers her identity through heartbreak and reconnections but as she grows in her own teen experience, her relationship with her family crumbles down until she is faced with the reality of her often selfish actions.