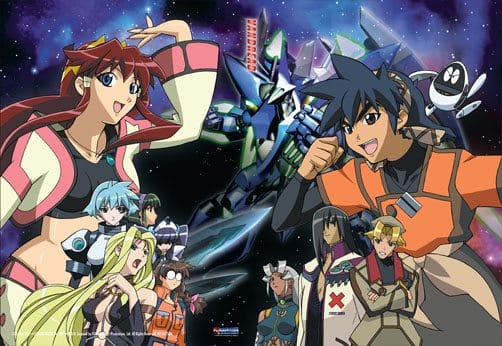 Men, let me tell you, as a lady, sometimes we just do not understand the weird stuff you say or do. However don’t fret, I know that the ladies are just as enigmatic. Perhaps we seem as if we are  alien races, just out to eat each others entrails. The characters in “Vandread” feel your pain! What starts out to be a battle of the sexes evolves into a battle of human survival. The first season hit the scene back in 2000, directed by Takeshi Mori, and was created by Gonzo, and licensed by Funimation. The second season aptly named “Vandread: The Second Stage” hit the scene in 2001, so call this an oldie, but definitely a goodie!

Enter Hibiki, born on the male only planet of Taraak. Women are an alien species to the men of Taraak. In fact, all the males born there understand that they are to hate and eradicate them in the ensuing war against Mejere, a neighboring planet ironically inhabited only by women. Hibiki, our main protagonist, is only a third class citizen, born into mediocrity and forced to be a parts mechanic for military equipment.  Knowing he has no opportunity to move up, but having a hot head and a lot of pride, begins bragging that he will show the government who is boss by stealing a “Vanguard” a military issued mech, that will be used in the upcoming battle. What he thought was idle chatter comes back to bite him when a friend mentions it in front of everyone one day while assembling parts for said vanguards.  Essentially stuck between a rock and a hard place, and raised with the mentality that “A man always keeps his word” he snuck onto the battleship before the attack force deployed in an effort to steal the vanguard. The ship deploys for battle, and Hibiki did not accomplish his goal in a timely enough manner and is discovered by the squad leader and thrown into prison. He is sentenced to death, to be made an example of for other third class citizens but before everyone knows it, all hell breaks loose. The ship is captured by an all female band of pirates from Mejere. As a mechanism to protect the information on the ship, the captain forces an evacuation to one half of the ship, which breaks away from the other leaving behind Hibiki, Duelo McFile a doctor, and Bart Garsus a navigator and trained fighter for the male supremacist’s. The men retreat, and fire a torpedo intended to destroy the ship, and all of the females, and few males left there. Hibiki hops into the vanguard to try to get away, but the torpedo nearly hit’s the ship. This attack activates the “Paksis Pragma” the living core of the battleship which eradicates the missile, but causes a wormhole to rip open in space and time and literally teleport them into a distant area in the galaxy. It also fuses together the female, and  male ship creating an upgraded ship, and upgrading Hibiki’s stolen vanguard and three of the females personal battleships known as “Dreads”. Pyoro, a robot entrusted to guard Hibiki also seemingly has evolved to emote and have a personality.

During their trip back to their respective homes, they encounter a new enemy entirely. A group of borg like machines that they are forced to fight against. After a few battles, they discover the Vanguard, and the Dreads are able to fuse together to defeat the enemy. When the Vanguard and Dreads fuse it becomes a “Vandread” both pilots enter the cock pit to battle the enemy together. At first, this leads to a lot of hilarity as the females do not trust the males, and as the series progresses they begin to realize that males and females were separated for the preservation of the human race, and humans as intended were not meant to be segregated. They also discover data on the enemy, and find that the remaining humanity left on the nearly uninhabitable planet Earth has turned on their own human race and turned colonized planets into organ factories, razing them with the borglike robots to collect organs to preserve and elongate the lives of those left on earth.

The pirate ship decides to take it upon themselves to battle this faceless enemy, and attempt to protect the people who have forsaken them. A lot of hilarity ensues from the female protagonists, and the male protagonists, and it takes you on an emotional ride and fascinating story of discovery about the two sexes. Feminist supremacy and male supremacy often flare up starting insane fights, and hilarious chase scenes. Love between man and woman is seen as forbidden but as the series progresses obvious partnerships begin to form as the crew learns man and woman were allowed to be together. The main female protagonists have deep stories, and I admit I cried a lot of times. Despite how much comedy relief this series contains (it’s more funny than serious most of the time) the moments that are serious are actually really sad, and you get so deeply connected to the characters. The series opens the possibility that one day humanity could be very different then what it is now, especially if we do not take care of what we have when we have it, and it has underlying lessons about love and trust. It also teaches us to fight for what we believe in. Despite the large amount of female characters, this is by all means a shonen anime series, but much like the series implies, give what you don’t understand a chance. Ladies that goes for you. Even if you do not like mecha robots, or a lot of jiggling breasts, the story is deep and thought-provoking. The characters have a lot of depth and personality and each one balances the other. There is an epic amount of comic relief and hilarity, and a uber amount of fan service, such as brief girl on girl action, lolicons, brief female nudity, and skimpy outfits, and some male nudity and brief male on male action for the ladies. Well enough of that before I get a nosebleed. But really even if you don’t typically like comedy, there is enough serious moments each episode that will make you want to watch this.
.
I do have a few real complaints about this series though that I could look past, but not everyone might be able to. If you are the type of otaku who gets REALLY mad when they change the characters and story line from the manga, to the anime series… Perhaps this one’s not for you. There are a lot of differences, right down to important characters being totally taken out, and people who did not originally exist put in, and major plot changes. Also the music score is so so so repetitive, and some of the battle music makes me think I was listening to the Crash Bandicoot OST. The fight scenes are beautifully animated, but are way to short, granted there are enough of them to keep you interested if you’re a mech head, but come on! Some of the characters are sincerely a little over the top, or annoying…Especially if you watch it in English, the characters change a little through English translation so please watch the subbed version first.

Really though that’s the only bad things I have to say and they were easy for me to overlook. I loved this series and it hasn’t aged a day in my opinion as far as animation goes. It’s pretty to watch, and easy to laugh or cry at. It held my attention, which is short in span and is 26 episodes long, so you don’t need to make a super long-term commitment toward finishing it. I highly suggest it to anyone, and although I have read a lot of people saying “who needs another harem themed anime series with robots in it” you people should stick a sock in it because regardless the familiar theme, It is not a typical mech anime, or harem anime, and that’s what makes it awesome! 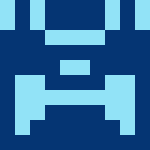