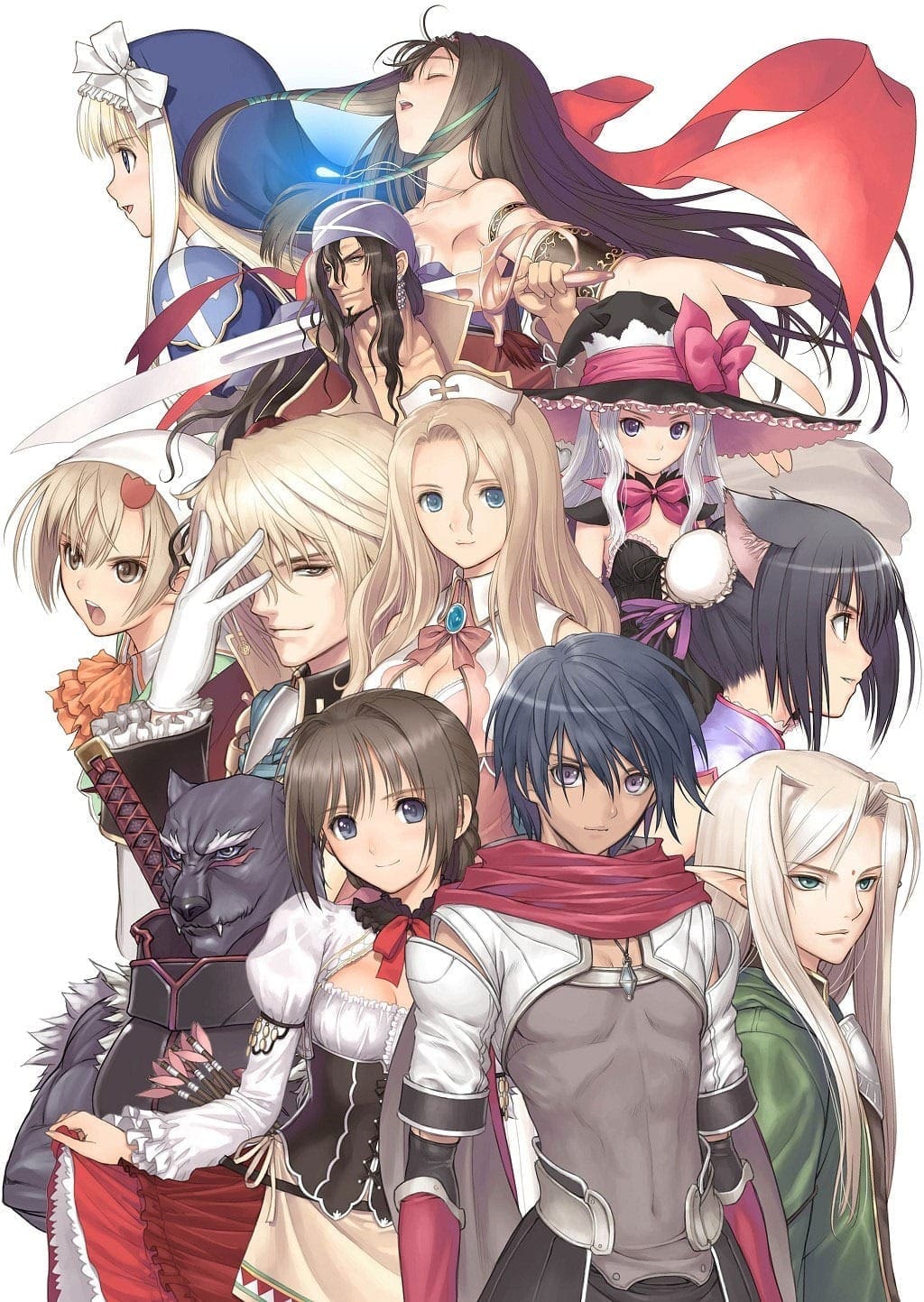 So I was looking around for something I would be able to watch in a week, and I stumbled upon “Shining Hearts: Shiawase No Pan” and thought to myself “This is only 12 episodes long, and is based on the PSP game! SO COOL! :D” Oh Sega, and Production I.G., you have failed me! How could people who made the anime adaptations of anything Masamune Shirow, or anything by Clamp, not entice me to play the game version of the anime? Back in 2010 when the game was released, I drooled over the beautiful art work, and adorable character designs, but watching this series, released in Apr 13, 2012 to Jun 30, 2012, made me want to throw up in my mouth a little. The best part of this series is the last three episodes, and considering there are only 12 of them, that’s a pretty sad percentage of success Sega. I demand the day I spent watching this series back. (Please send it in the form of a Sega Genesis with a copy of Kid Chameleon, please?)

Any way, I will go over the synopsis and character descriptions to give you an idea of why I feel so disappointed. It starts out with Rick, a young man, void of any memories, whom washed ashore the fantasy land of Wyndaria, an island inhabited by many human, and demi-human species. Rick is our main male protagonist, and was rescued by three “sisters” and Madera. Madera was once a selfish woman, but later found her calling in rescuing people who washed ashore. She ironically is wise and seemingly all-knowing, and owns the bakery where the “sisters” she saved bake. The bakery is aptly named Le Coeur, meaning “The Heart” in French. Sister number one is Airy, a blonde, blue-eyed, busty young lady in a nun costume. She has a soft spot for children and is often seen delivering bread to the children staying at the towns orphanage in the church. Sister number two is Amil, dressed like a pioneer, with two long light brown braids. She is loud and haughty, quick-tempered, but has a soft spot for Rick, and is often empathic to his sadness. Third sister is Neris, dressed like a milk maid, with a red ribbon in her hair. She has long brown hair, and blue eyes, and is also rather busty. She is great with a bow and arrow and boldly enough likes to fight with it. You find out they are not really sisters, and like Rick… they share the experience of also washing ashore and having no memories of their past. The odds of that happening are staggering. When Rick is saved, he stays with the girls at Madera’s bakery and learns the art of baking bread. There are some sub-protagonists as well. Xio-mei is a cat girl, who doubles as a “Robin Hood” like cat burglar. Ha the Irony of a Neko being a cat burglar. She steals artifacts from the Castle, and sells them. She donates her earnings often to the church. On the side, she runs an antique shop, you would not suspect her in one considering she is rough and tumble and has a potty mouth compared to the rest of the characters. There is Dylan, a pirate with a nice side. He is in love with a barkeeper in town, and offers Rick spiritual advice that keeps him on track.  There is Hank a dwarf who helps fix the shops furnace of course for a price. Hank is a really cool character however. He is tough and likes to tinker with things. He often builds machines that help along during the plot and in his house he has a mysterious robotic woman hanging like a marionette from his work shop ceiling. The marionettes name is Queen, and you later find she is a body-guard for our main female protagonist later to be introduced.  There are a lot of characters, very fitting of a video game to have a full cast that you can relate to and swap around.

Ok let’s get on with the story line shall we?  Essentially the town loves Rick’s bread, and the girls shop and comes to rely on them for their bread needs. The girls and Rick cater to their specific needs, and even go as far as to home deliver them bread. That trust is essential, and one night Madera sensed a bad omen from the showing of the red moon. She told the towns people of a storm that was coming, and the people took heed. Naturally the storm ensues and rips down tree’s and damages property, but the towns people survive and no real damage is done that isn’t easily fixed. Amil discovers another person washed up on the shore (Really? Are we seriously at like 5 people at separate times who washed up on shore?) and goes to get help. Rick and the other girls come down to check out the scene. Laying there is a young woman dressed like a gypsy with a mysterious pendant around her neck. It glows and pulses with some type of magic. They take her to Dr. Ron, the town doctor and routinely come to see her with bread incase she wakes up. It takes her a few days to come to, so trust me most of the episodes are purely filler. Another bad omen hit’s the island when they discover enemy pirate ships approaching the island. The royal guards tell the towns people they are under a “black out order” meaning no lights at all and everyone needs to stay in doors. However at the doctor’s office as the ship approaches, the pendant glows attracting the guards attention, and the pirates who shoot a missile in that direction. A guard breaks into the office, and attempts to hack and slash the sleeping girl to make the light stop, when Rick grabs a sword as if instinctively and defends her. Amil yells for them to stop, triggering a memory in Ricks mind, he somehow knows the sleeping girl. The pendant somehow sends a signal to the robotic woman in Hanks shop, and she defends the town with a giant laser and then proceeds to shut down. No one really questions this and eventually as time fades, Rick starts to have a lot of inner turmoil about his identity. He asks things like, “Why am I here?“ “What was my past?” “What should I do with my future, can I really keep baking bread?”  ’Sup Cloud Strife?  However the sleeping girl awakes momentarily and reveals her name as Kaguya. She sleeps through most episodes but the team brings her bread each day hoping she will awaken permanently and regain her strength. When she is awake she is seen eating bread, and just saying “delicious” and then passing back out. During an episode you think is just filler, they discover there is a sunken treasure that is actually the key to waking up the robotic android in Hanks home, they go through hell to rescue the treasure but it is confiscated by the Prince of Wyndaria. Later you discover when the Prince and Princess meet with the gang, that they took it for “safety reasons” and will be rewarded once it is proven safe. Xio-mei and Hank are not pleased with this answer and actually break in and steal the treasure. The story shifts through filler and filler and then wham all of a sudden Kaguya is awake and walking around by herself and doesn’t have a care in the world. Upon stealing the treasure, Hank awakens the android who then kidnaps Kaguya, and Hank and Xio-mei are arrested.

Then there is another red moon bringing a bad omen, and Dylan the pirate arrives with injured men and a warning of an approaching fully armed futuristic enemy ship full of inter-dimensional lizard men.

Confused yet? Yeah, me too, but I digress.

Queen explains that Kaguya is actually from another dimension, and it is assumed so are the other people who washed ashore with no memories, and they are only after Kaguya’s power to fight their wars.  Queen takes Kaguya to the prison to protect her, but Kaguya decides to give herself up to the beastmen. Upon this choice, Queen gives the pendant to Xio-mei and sets her and Hank free, and flies off with Kaguya to the ship. Xio mei and Hank are re-captured by the Prince and he confiscates the pendant later giving it to Rick, along with a sword he took from Rick asking him to save Kaguya and the towns people. Rick rushes off into battle to save her, but not before questioning his identity again and having a mental break down. The battle ensues, and the rest is for you to watch if you decide to.

Well here’s the good, bad, and the ugly. Time for my opinion! Would I suggest this anime to action lovers? Oh my goodness no, the only action there is at all, is the last like 3 episodes, and one filler episode. Would I recommend this to people just looking for a slice of life? God no, it flip-flops so much between the characters it’s hard to really get to like or get attached to anyone, and the characters are all so one-dimensional, it is too hard to get comfortable and settle into watching it.

The animation is beautiful, the coloring is lovely, and the backgrounds and foregrounds are amazingly detailed, but that’s when there is animation. A lot of the scenes just contain a still frame shot of the scene and it pans through the characters. The blinking animation is so superficial. They blink slowly, or rarely at all, I would hate to get into a staring contest with any of them because I would lose so hard! The shading is really nice too, lots of shadows when it’s appropriate, and the characters blush a lot so the animation for that is really cute. You want to like the sisters, you really do, but most of the time they are just pretty to look at and all they think about is bread. This series made me hungry more than entertained. Also how many people, honestly can wash up on a shore in one series. Not only did 5, but there was a few more I didn’t mention who had no memories and floated there mysteriously. There were a few Easter eggs however that I smiled over. For one, the girls color schemes are RGB. Neris had a red dress, Amil had a green dress, and Airy had a blue dress. I laughed a little about that. Another easter egg, I might be making up, but since Sega pretty much made “Hatsune Miku, Project Diva”, during the end theme, their dance looked like something right out of “Miku Miku Dance.” My overall assessment? This series is stale at best, I wouldn’t suggest any one to take a bite out of this. I don’t care how much “love” went into your half-baked series Sega and Production I.G. I am glad to tell everyone that this is a loaf of crap and it’s better wrapped in a plastic bag, and thrown into the trash can.