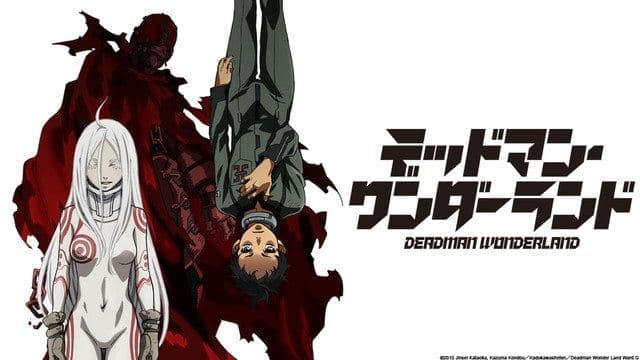 When I heard Toonami was coming back on Cartoon Network, I think I speak for us all when I say, I cried tears of joy and excitement. Not only was a childhood staple of my life returning, it was coming in full force with an entire roster of new shows that piqued my interest. Deadman Wonderland not only piqued, but kept my interest to the point of obsession. This series was originally written by Jinsei Kataoka, and was illustrated by Kazuma Kondou. Funimation Entertainment owns the licensing rights. It was animated by Manglobe and first aired in Japan on April 17, 2011, and aired in the United States on May 26, 2012.

From the first episode, it begins with a horrific earthquake that destroys a majority of Japan’s mainland and parts of Tokyo sinking them into the ocean. Flash forward a decade later to Ganta Igarashi, the main protagonist, a survivor of the disaster. He has no real memories of anything before the disaster but is seemingly an innocent, happy-go-lucky kid who is just enjoying his school life. However the things he cannot remember about his past come back to haunt him. A being floating through the sky covered in red armor, and blood intrudes his classroom and murders everyone in front of Ganta. We the viewer watch as the being rips flesh apart and dismembers innocent children while smiling the entire time. As it finishes his classmates off, it turns to Ganta implanting a red gem into his chest, and leaves him there in the blood to await the results. Ganta is apprehended by authorities, and after a suspiciously short trial, he is incarcerated, and given the death sentence in “Deadman Wonderland” a prison that doubles as a theme park.

The prison is based literally at the site of the disaster. Most prisoners work at the theme park to make money to restore Japan. Prisoners on death row, such as Ganta however face a different fate. They are segregated in the prison and are fully equipped with a neck brace that constantly monitors their vitals, position in the prison, and pumps them full of a wicked poison constantly that will kill them in three days time. The only way to survive the poison is to eat the antidote, ironically dressed up as a candy in a wrapper. During his stay he encounters many characters, a majority of them sinister and neurotic foaming at the mouth with psychosis. Especially the assistant warden Tsunenaga Tamaki, once a hikikomori (socially withdrawn loner) with an obsession for video games.

After the disaster, Tamaki was driven to lunacy and began to look at life as a game, and has no qualms murdering, destroying and manipulating both his staff and his prisoners alike. Ganta also meets a strange albino girl named Shiro, who wears a white body suit with red designs and boxing gloves over her hands. She is childish in nature and has shocking strength and abilities. He becomes even more shocked when she has detailed stories of knowing him before the disaster. Ganta has no recollection of his past, so of course Shiro is hurt by this, but eventually he remembers things about her. You get to go on an emotional rollercoaster the entire series and watch him pick up pieces of his life with her before the disaster. Shiro is constantly running around trying to defend and save Ganta from trouble, but soon enough Ganta discovers a strange ability of his own. He can control his blood, and make it take the form of bullets. The prison refers to those with the ability to control their blood as “dead men” and they contain a virus like substance in their blood called “branches of sin” most likely this is because of the red gem that was imbued into his chest.

Ganta is moved to G-block which is the residence for dead-men only, and is soon forced to compete in “Carnival Corpse” which is an underground fight that only anonymous patrons, and the highest prison staff are aware of. Upon winning Carnival Corpse, the winners are rewarded with caste points, which are used to buy things inside the prison, candies for survival against the poison, and fame and recognition from the sick sadistic people who pay to watch the death games. Ganta is given the name “Woodpecker“, which is fitting considering the arena resembles a bird-cage. All fights are arranged and watched by Tamaki, and he smiles doing so knowing the carnage will reap attention and money for the prison to continue more research on deadmen.

Ganta is essentially a victim of circumstances. He is a young kid thrown into fights to the death against people with honed physical prowess. He learns that upon losing Carnival Corpse, the penalty is a part of your body. The scientist who does secret research on deadmen, pulls the lever. What ever it lands on you lose, from an eye, to your spleen, to your life. If you manage to survive, you continue to fight until you either die, or lose the essential body part that’s the key to your survival. Shiro continuously calls Ganta weak, and from the beginning of the series, he is shown to be physically and emotionally unstable. You want to reach in there and pull him out, you know he is innocent but no one cares to hear his case, as though he belongs in the twisted birdcage.

The entire anime might only be 12 episodes long but in those 12, you become so quickly attached to the characters and their individual stories, you can literally feel the hopelessness that emits from Deadman Wonderland. The artistry is dark, and moody at all times, and there is no shortage of blood, fighting, and action. Even in some of the darkest parts, there are characters who instill so much hope, and light.

I am not ashamed to say I cried more than once in this series. It’s really that gut wrenching. I am sad that there was only one season, but I’m looking forward to picking up on where it left off in the manga. The first 12 episodes cover up to chapter 21 in the manga. I would highly suggest this to any anime fan, even shoujo fans. It really has something for everyone. Theres more than enough action to keep you on the edge of your seat, and a killer soundtrack. There is no shortage of fan service either, lots of busty female’s in tight clothes running around with guns, and foul language, and moe!

Ok so maybe I wouldn’t suggest this to “ANYONE”, definitely mature audiences only ok? Thank you for reading, and hopefully you come back for my next review. Now what are you waiting for? Stop reading and get watching!