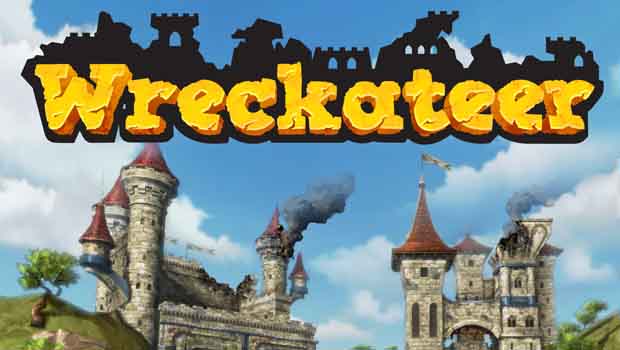 What happens when a game lives up to the hype you created for it, while simultaneously disappointing and frustrating you? Well you of course hop online and write your first review for the Geek News Network. That is what I plan to do for you today with my first GNN gaming review. The focus of this review: Wreckateer from Iron Galaxy Studios. Obviously Wreckateer is extremely similar to its far more successful cousin, Angry Birds,, but it does differ in on crucial way. Angry Birds is played entirely from a side-scrolling perspective with your finger, while Wreckateer is done from the third-person perspective using your entire body and Kinect. Yes, this is a Kinect game. Yes, the controls are fairly awful. More on that in a moment though.

Since this is my first review for Geek News Network, I thought I would take us through what I consider the crucial points of any game to see how Wreckateer measures up.

While not top of the line by any means, Wreckateer does boast some pretty visuals. The scenery is vibrant and colorful, while not overpowering the senses. Buildings break apart in highly illogical ways, but due to the cartoony art style it isn’t terribly bothersome. The balls with which you do your wrecking are all easily recognizable for their special abilities; making it relatively easy to plan out a strategy for destruction at the beginning of each level.

The music in Wreckateer is reminiscent of the Fable series from Lionhead Studios, but with the caveat of it being the entire soundtrack smashed into one song and played on repeat.The sound effects are decent, but you will hear things repeat over and over again. The quality of sound is average, but sound is by no means the focus of a game such as this.

Here is the most important part of any game; how does it play? Well in the case of Wreckateer I have to say that it’s moderately decent. When the controls work well you’re treated to the fun of lining up a shot using your body movements and then watching it sail off to create destruction upon the world. Your implement of destruction is flying across the sky when suddenly the restart meter starts filling up in the upper corner of the screen. For reference, if at any time during a level you feel you have done so terribly that you need to restart you can raise your right hand for 2-3 seconds and start from scratch. At this point I’m standing perfectly still, my hands by my side. Right as my last shot is about to collide with the final castle, securing an extremely difficult gold medal the level resets. Truly it is a great thing that I’m not a violent, rage-filled gamer. Even more important is that this is a controller-free game, therefore there is nothing for me to throw. Oh well, time to restart the level again.

This is a semi-common occurrence with Wreckateer. Most of the time the Kinect was capable of reading my movements and doing what I wanted it to. Sometimes it would take an extra few seconds here and there due to a lack of precision, but ultimately you were still able to get the shot you wanted. Other times the game became a lesson in frustration. Sometimes a slight tweak to your hand placement would cause my character and ballista to spin completely in the wrong direction. Other times my shots would fire before I even stepped into the play space. Incidents like this accounted for roughly 1⁄5 of my nearly five hours of playtime. With how long Kinect has been available I feel things such as this should be far less common.

Single-player is extremely frustrating because of this, however multiplayer sort of thrives because of these issues. After a couple of hours of pain and frustration playing Wreckateer I decided to have my wife hop in for some fun-filled castle destruction multiplayer. This was where the game finally won me over, a little. In multiplayer each player takes a turn firing their shot while the other player sits and watches on, probably taking notes on what to do or not to do. Ultimately this gains a bit of a Horse mentality, with the players attempting to one-up each other. The control glitches are still around during multiplayer, but with another person it turns into a game in of itself; mocking each other when the game decides to fire your shot before you were ready. Ultimately this is where the fun in Wreckateer is found.

There is no story other than the one you make up here. The narrative told in the game is flimsy at best, non-existent at worst. Normally I feel that story is the most important aspect of a game, but with a game such as this it really isn’t necessary.

Wreckateer is by no means a great game. Honestly, it might not even be a good game, but if you’re patient it can be loads of fun. Before hopping on your Xbox 360 to buy the 2nd entry in Microsoft’s Summer of Arcade, make sure to check out the trial. That in itself should tell you if Wreckateer is right for you. Personally it is my belief that the game is highly enjoyable as long as I’m in the right mindset to play.