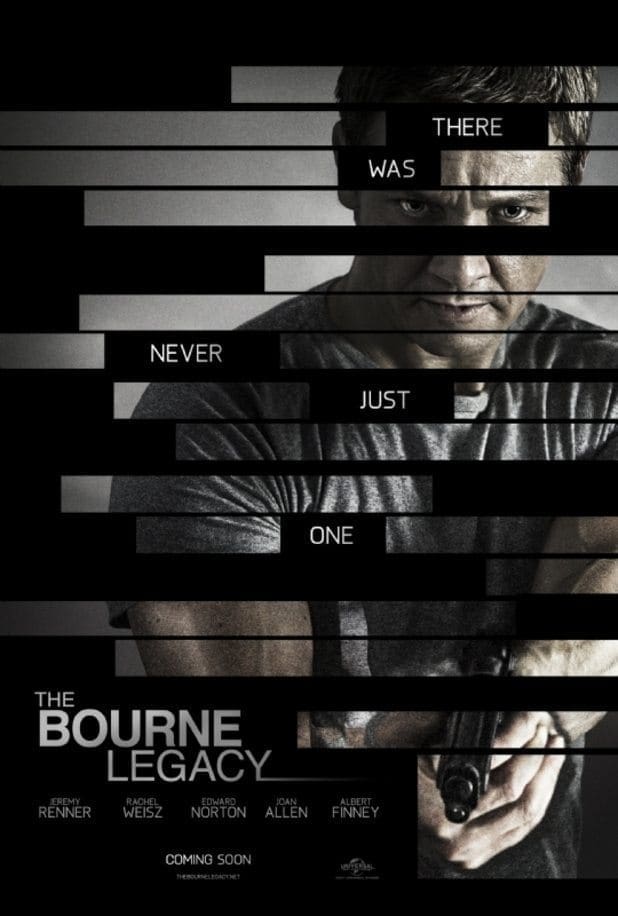 How do you continue a successful franchise when its main star is too old and busted to continue (Mission: Impossible Ghost Protocol) or won’t sign on for the sequel (The Bourne Legacy)? Cast Jeremy Renner of course. I mean he’s worked out better than Shia LaBeouf. Renner seems to be Hollywood’s go to guy at the moment. Perhaps they should have cast him in John Carter or Battleship…too soon?

Any who, The Bourne Legacy starts at about the last third of The Bourne Ultimatum (which the Bourne series seems to love to do), but instead of tired, boring, whiney Jason Bourne, we’re introduced to a (possibly) younger, cockier agent by the name of Aaron Cross. Cross is part of a different program though where the participants are genetically enhanced and require a daily dose of Skittle looking pills to keep their physical and mental superiority. Unfortunately, the brass in D.C. decide to “burn the program to the ground” after Bourne wreaks havoc in New York. In this case burning programs to the ground involves systematically eliminating other similar agents in the field with a new Zantac looking pill. Cross happens to be in some remote region and therefore his Zantac cyanide pill comes in the form of a missile fired from a drone aircraft. He survives, duh, but his stash of pills is destroyed and thus begins his quest; find more pills. He’s like a buff, athletic, ass-kicking junkie.

I heard a lot of people having problems with the pills plot line, but I liked it. The previous Bourne movies were action packed and fun to watch, but they were all the same. A man doesn’t know who he is and murder anyone with a book or magazine to find out. Cross knows who he is, he just wants the pills so he doesn’t revert back to his old dumb self. He doesn’t give a crap about the people trying to kill him. My one complaint is that they could have cut back the protracted prologue in favor of more low I.Q. Cross back story.

I was a little nervous in regards to the action sequences because they looked a little hokey in the trailer, but my fears were put to rest. They weren’t as frenetic as the previous installments, and Cross doesn’t use a book, magazine, or pen to kill anyone, however, I think it’s because Cross is more calculating, he thinks things through before engaging. There are three major action scenes, each building off the last, with the final motorcycle chase taking place in the crowded streets of Manila. It wasn’t as nail-biting as the chase through New York in the previous one, but it was infinitely better than the mini cooper chase in Identity.

Also an improvement over the previous two entries is the cinematography. I am no fan of the documentary style of film making that Paul Greengrass loves so much. It’s distracting to me. Tony Gilroy really tones it down during the tension building dramatic moments, but is surprisingly good at putting the pedal to the metal when it really matters.

Edward Norton was one of my favorite aspects of this movie. His character is the main villain and boy is he good at it, but you never really hate him. Sure, he wants to kill everyone to cover things up, he’s just so good at it that you kind of agree with him and almost find yourself rooting for both sides. Renner and Norton only share one unimportant scene together, but I got a sense of regret from Norton so hopefully we’ll get to see more of it in the impeding sequel, which, if the sequence of books is still followed, will be The Bourne Betrayal and that title could offer a ton of possibilities.

Legacy was more of a fast paced drama than an action adventure with brains. Don’t go in expecting a globe-trotting adventure. When the characters traveled it seemed natural and logical and not just so the crew could go on a vacation to Venice. So, to wrap things up Legacy was a fitting sequel and breath of fresh air to a tired and redundant franchise.