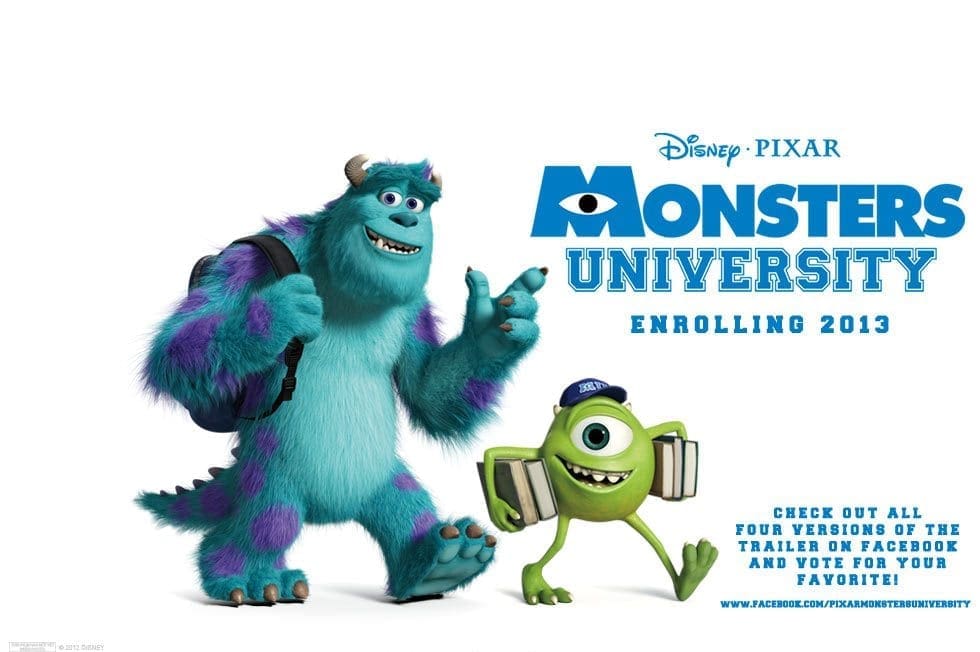 In 1995, Pixar released the first full length 3D animated movie Toy Story. My 10-year-old self sat in that theater entertained by the world of toys that came to life when people weren’t looking. My imagination soared and my future was set; I was going to be an animator when I grew up. I spent the next 12 years working towards that goal, ultimately graduating at the top of my class.

I then had door after door slammed in my face, moved back in with my parents, and did everything short of holding a cardboard sign that said “Will Animate For Food.”

As a young monster, Mike Wazowski (voiced by Billy Crystal), visits Monsters Inc. and is inspired to become a “Scarer”. He then obsessively works his green butt off to to get into Monster University’s scare program, where he then obsessively continues to work as hard as he can to be the best scarier. Problem is, while he is the best student, Mike isn’t scary. James P. Sullivan (voiced by John Goodman) is a legacy scarer and skates by thinking that scaring isn’t something you learn, it is something you do. As scary as he is, he doesn’t know how to scare by the book.

After both are dropped from their program, they and a fraternity of misfits enter into the Scare Games with hopes of being the scariest on campus and earning the respect of their professors, peers, and the dean. Obviously it is a bumpy road full of twists, turns, and lessons, but most importantly it is about self discovery and friendship.

I can’t pick a favorite scene from this movie as I truly feel this was a Pixar perfect film. From unique, rich characters to subtle details, to feeling immersed in Monster University life, this movie does the original justice. However, while the 3D is enjoyable, it doesn’t add anything extra to the story. I think that seeing it in regular 2D is fine.

While I don’t want to reveal the ending, I will tell you this; while the path I went down to get the my dreams may have not been the one I thought, I am still working towards it, just like Mike and Sulley do in the end.

About the Movie:
A prequel to the Monsters Inc. movie series, Mike and Sulley meet at Monsters University, where they learn to become “Scarers”.  While slowly developing their friendship, Mike discovers that he may not be as scary as the others, right away.  He must learn to face many obstacles and follow a path to realizing who he truly is, much like the average college student.