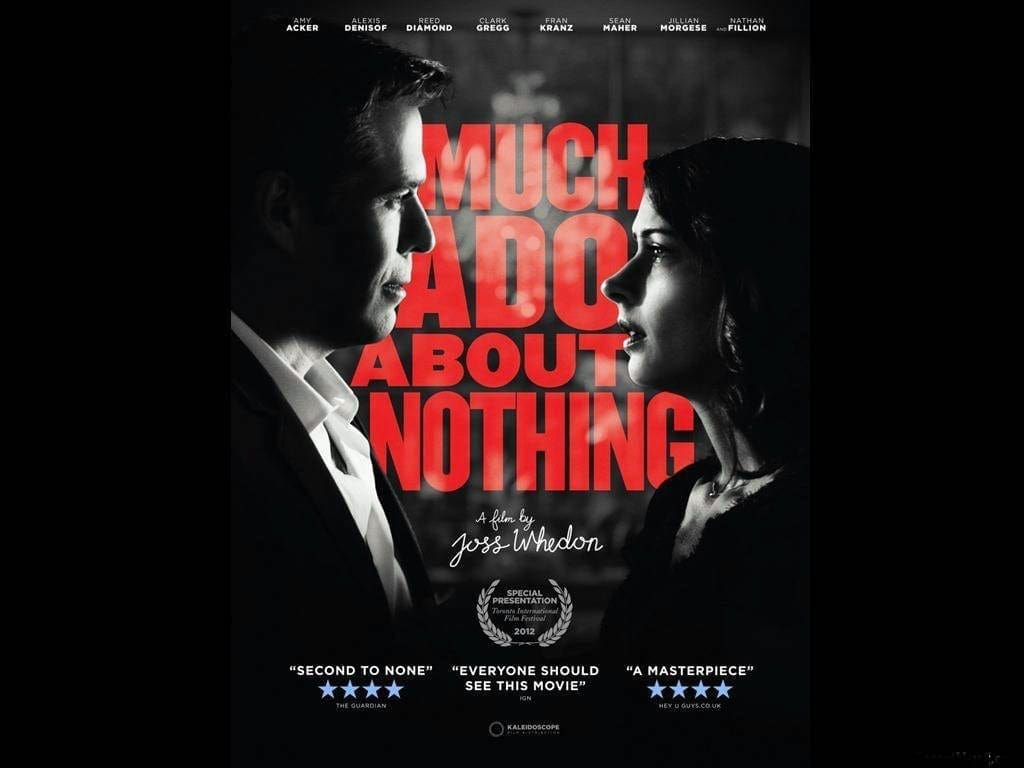 Robots! Guns! Fast Cars! Superheroes! End of the world comedies! The bombastic nature that accompanies summer blockbusters is the basis of what draws us to the movies this time of year. It’s fun, it’s cool, and we love it. Yet, every once in a while it is nice to step back from the “pew pew pew” of the Star Treks and Iron Mans, grab a glass of wine, and enjoy a little film carried by acting and prose.

Joss Whedon’s production of Shakespeare’s Much Ado About Nothing, is a personal project based on the crowned geek director’s love of the English playwright. Shot in 12 days in Whedon’s own home, this classic tale takes on a modern aesthetic while keeping the original dialogue. Many of Whedon’s usual suspects are here, too: Amy Acker, Alexis Denisof, Sean Maher, Fran Kranz, and the captain himself, Nathan Fillion.

The story is about two pairs of lovers. Benedick (Densiof), a self proclaimed bachelor, refuses to admit feelings for Beatrice (Acker), whom herself, has given up on men. Meanwhile, Claudio (Kranz) and Hero (Jillian Morgese), experience love at first sight upon meeting at a mutual friends estate, where all our players have come together. When Claudio and Hero decide to marry within the week, the remaining friends try to bring Benedick and Beatrice closer together. Meanwhile, Don John (Maher), who enjoys making trouble, does everything in his power to disrupt the happiness. Told with witticism and provocative charm, this comedy is considered one of Shakespeare’s finest.

Shot fairly simply, the film relies on the actors and the dialogue. There were a few weaker performances, but Denisof makes a charming Benedick, Maher a smarmy villain, and Nathan Fillion, of course, works his usual charm.  I also discovered that, Clark Gregg, who I’ve only known as Agent Coulson, can be more than just a man in black, as he portrayed an adorable Leonato, whose house and beautiful estate is the setting of the story.

Even though Whedon’s strong suit is normally his own writing, here he successfully provides a quaint visual vehicle for the story. Of all things, I actually really enjoyed the blocking. All of the action that takes place on the screen is well thought out and comedically timed. Things happen in the background as much as they happen in the foreground. Very reminiscent of an Aaron Sorkin film, where people walk, talk, and interact with each other, the environment, and the camera. Plus, they drink wine. Lots and lots of wine. All in all, it makes for a lot of “action” in a movie where you normally wouldn’t expect it.

Additionally, while you will not find the best production values here, there are some beautiful black and white shots which I felt highlighted the contrasting nature of love and relationships. Furthermore, in true Shakespearean fashion, the masquerade ball epitomizes the calm before the storm, while Whedon exonerates the moment with elegant tones and light airy music, which he composed.

All in all, Whedon has succeeded in modernizing a tale that has stood the test of time, while visually mimicking the wit and charm of the source material. While it may sound cliche, and if you are searching for something different during this summer blockbuster season, settle in for Whedon-does-Shakespeare. You will not be disappointed.

Synopsis: A modern retelling of Shakespeare’s classic comedy about two pairs of lovers with different takes on romance and a way with words.

Awesome review. I am definitely going to give this at least a RED BOX try.