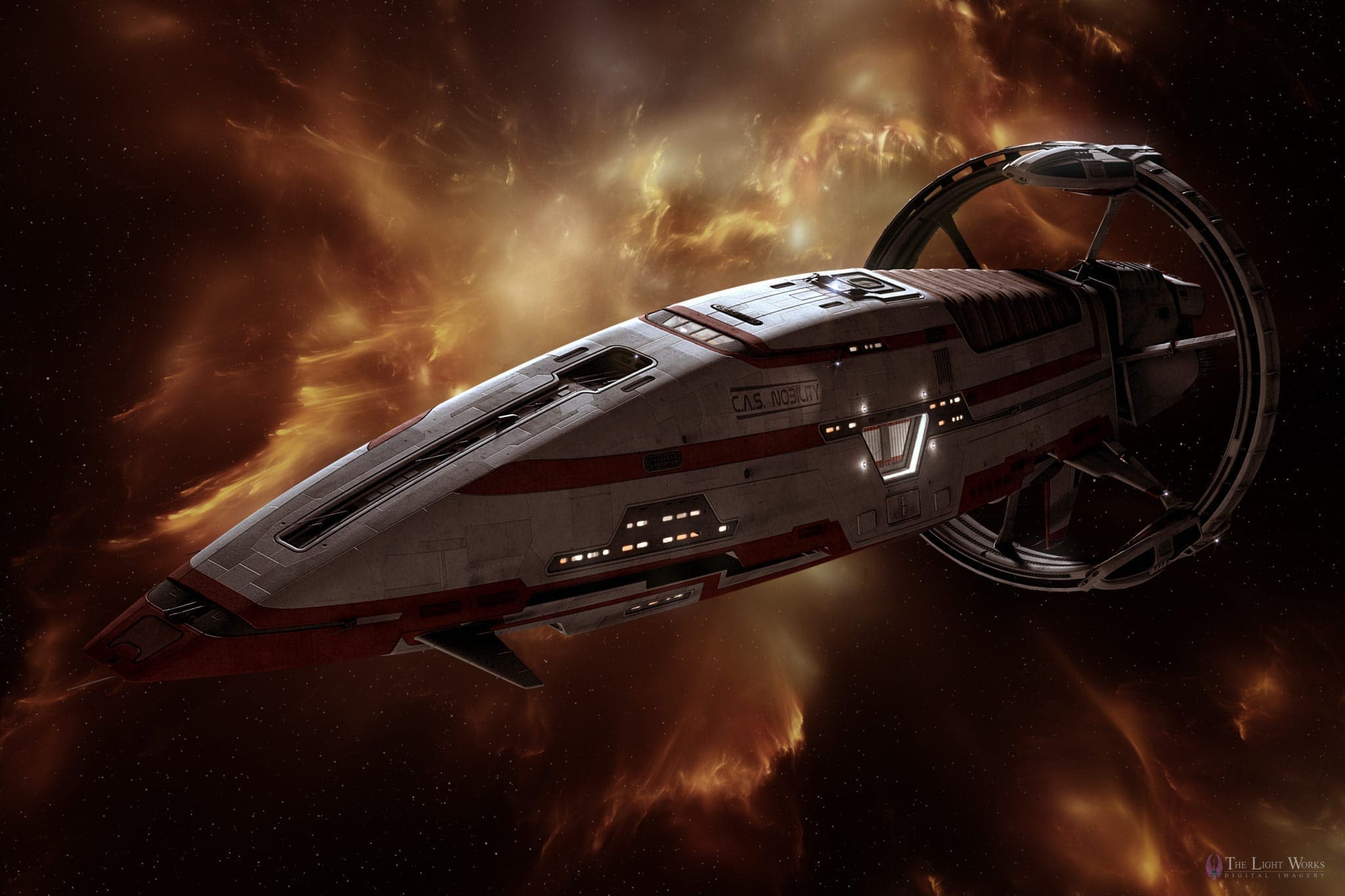 Set 700 years in the future, Nobility is about the C.A.S. Nobility, Humanity’s most powerful starship, with a crew, that’s, well, anything but noble. Instead of the best-of-the-best we have an apathetic, pleasure seeking, Captain, an engineer who’s so lazy he won’t even speak, a condescending first officer, as well as an effeminate navigator who thinks himself a cowboy!

If you were introducing Nobility for the first time how would you tell someone about it?

Well the quick and snappy version is “‘The Office’ in Space” and that was the initial concept.  It’s kind of evolved to include a lot more dramatic aspects though.  So for those who have a little more time I’m going to go through how we have the scope of Babylon 5, the character drama of Battlestar Galactica and the fun humor of Firefly and Galaxy Quest.  So it really is one of those shows that has a little bit of something for everyone.

Recently I’ve seen a lot of shows that are a nod to retro scifi or its a spoof where its taking a lot of aspects of older sci-fi and just running with it.  Is this something entirely new or is this a nod?
It’s something entirely new.  Now that said we do give tribute to some older stuff we have some Easter eggs for fans, some in jokes for fans but it is an entity unto itself it has its own story, its own universe and its own characters.

I think with little nods to sci-fi the way you talk about doing it I almost feel true sci-fi fans and true sci-fi writers and producers are kind of in on the joke.  It’s almost like a continuing fun conversation with the fans…
I think that’s a good way to put it.  That it is a conversation with the fans.  The sci-fi community is so adept and so intelligent that you really can have these very high brow intelligent conversations with them and they are also going to be observant enough to pick up on all those nuances you put in there.  The one thing I like to ask people who have read the (Nobility) script is have they picked up on the Dr Who reference in it?  I’m going to have to start giving out a prize because no one has done it yet.

If you were going to describe Nobility would you say that it leans towards the “used universe” version of sci-fi or a very shiny glossy kind of universe?
We have a lot of different cultures in the Nobility universe so while the ship itself leans more towards the shiny new optimistic look, the Eugine, who are in some ways the main villains, they have factions within them.  A lot of them are good guys and alot of them are bad guys.  They have a lot more of a militaristic …slightly more industrial look.  In fact one of our main characters is a Eugine with split loyalties so we have a lot of fun coming in there.  Then there is Betty who is this kind of used clunker of a shuttle that the navigator, Takashima, keeps in the shuttle bay and keeps tinkering with like you would a classic car.  So that does have that kind of used, run down and haphazard look.

How you did meet all the people who are now involved with Nobility?
It really is one of those things that happened over time in different ways it’s not like I went to a convention and all those celebrities who are currently on board were all just sitting in a room and I went up to them…(although) It would have made my life a whole lot easier! (laughter) It really is this mish mosh of people knowing people or randomly meeting folks.

The first celebrity we got on board was Claudia Christian from Babylon 5,she played Susan Ivanova, and (our producer) Neil had a loose connection to her.  They were acquaintances from awhile back, and so he recommended I contact her and so I reached out and we started talking and she liked the the script so she came on board.

Cas is another celebrity who recently came on board and he was in Lost, and is very well known for being the voice of Altaïr ibn La-Ahad in Assassins Creed and we met him at Wondercon.  We were wandering around talking to folks and Tonya ran in to him put us in touch and he liked the script and he’s been wanting to do a lot more scifi so he came on board and has been wonderful.

As far as Michael Reeves the other celebrity we have on board – for those who don’t know him he won an Emmy for the animated Batman series…we have some mutual friends and so we were acquaintances and we met a few times and occasionally exchanged emails – he contacted me asking to come on board so that made me very happy.

I’m going to roll this right in to another question – You ask for $45,000 (in your Indiegogo campaign). Can you break it down to let people know how the money is going to be used?
Please keep in mind that with the experienced team of folks we have – The amount of money that we are asking for most people will look at us and think we’re crazy – but I know we can do it for this small amount.  That said…mostly honestly a big chunk of it is going to go in to the VFX the CGI and that does cost a lot of money.  It’s a lot less than trying to build a practical ship or a practical model of the ship and trying to do CGI from that but it still does cost a lot because it’s a highly trained skill set of people who want to do that.  Another lot of that is going to go to our awesome actors already on board.

I myself am not going to draw a salary from that just because for me this is about getting a quality product out for the fans.  None of it is going to go in to my pocket or any of the other producers pockets or anything like that. Even Neil isn’t taking anything up front.

I’m going to give you a chance now to say whatever you want to say to your audience – just as if you were at a convention.
Nobility is an awesome dramatic comedy that not only takes you along for a fun ride with an intelligent story but also is your chance to get involved in creating new sci-fi and ushering in a new wave of fancentric sci-fi.  Check out our Facebook and out Twitter accounts that way you can be a part of this new beginning.

Their Indiegogo ends soon but there’s still time to help out!