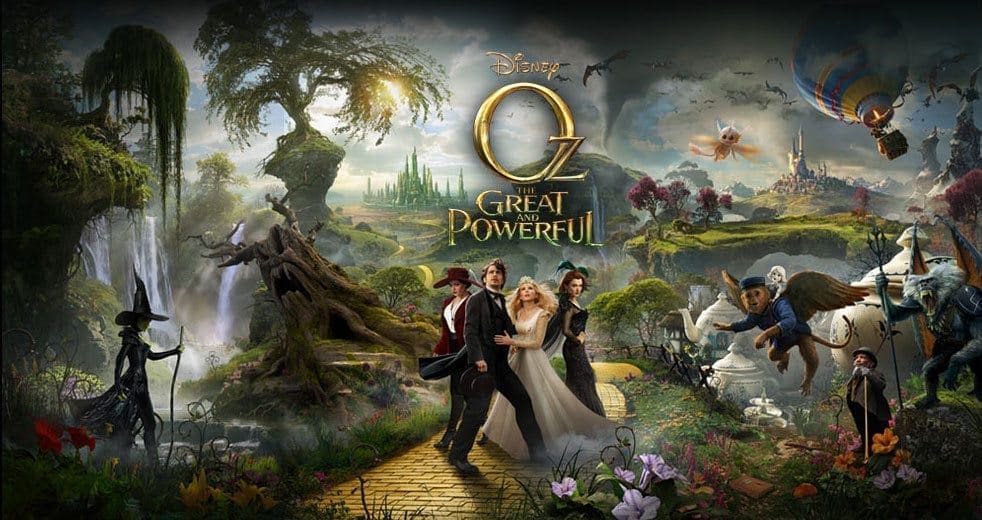 Like most kids I remember watching the The Wizard of Oz as a kid. I wanted nothing more than to have a pair of ruby-red slippers and a dog to follow me around as I skipped along a yellow brick road on my way to get my wishes granted. Alas, I only had red sneakers that light up and I put a bow on my cat that I carried around in my makeshift picnic basket and I just skipped around my house, my mom yelling at me to stop torturing the cat.

Watching Oz the Great and Powerful is an exceptional experience that fills the imagination with wonderful new characters, scenery and one liners that will stand the test of time just like the original. Oz is one of the most visually beautiful movies and stories I have seen in a long time.

While the concept of the story is simple and straightforward: Boy gets stuck in a magical world where he is caught between three squabbling woman fighting for the power of a world that needs direction desperately. True to form the good side is full of underdogs and they have to find creative ways to beat the villains. There are bumps, bruises and talking animals along the way, but in the end he gets the girl and beats the bad guys (while breaking some hearts along the way.)

You have to see this movie, even if just for its one of a kind visual effects, camera work and 3D. The best way I can describe this movie is it is a Disney movie inspired by Disney itself. In true Disney fashion they have created a completely immersive environment through beautiful visuals and camera shots. There are parts in this movie where it is like being on Star Tours at Disneyland, where the camera is moving seamlessly through the scene as you travel along with Oz. The only thing that could make it better is if it were in 4D and you got splashed, sprayed and had the wind in your face while watching.

Disney truly put a lot of time and effort into making sure that this film was meant to be enjoyed for the 3D experience.

Oz did a great job with making sure to stay in line with the Wizard of Oz movie while making sure all the pieces lined up: setting up the Oz machine, munchkin land, the explanation of the Wicked Witch of the West’s evil ways, even how the Witch ended up on a broom. The only plot hole I found was in the ruby-red slippers. We never find out how or why those came to be. *Editor’s Note: The reason the ruby-red slippers were not written into the story is because Warner Bros. still own the rights to that part of The Wizard of Oz.

The characters are so rich and full of life. From the loyal flying monkey to the feisty china doll to the extremely emotional wicked witch each character is vital to the story, richly developed, lovable and relatable. You fall in love with or hate the characters fighting so hard for what they want and believe over and over throughout the story.

This movie is truly a must see in theaters in the 3D experience.

Disney’s fantastical adventure “Oz The Great and Powerful,” imagines the origins of L. Frank Baum’s beloved wizard character. When Oscar Diggs (James Franco), a small-time circus magician with dubious ethics, is hurled away from dusty Kansas to the vibrant Land of Oz, he thinks he’s hit the jackpot—fame and fortune are his for the taking—that is until he meets three witches, Theodora (Mila Kunis), Evanora (Rachel Weisz) and Glinda (Michelle Williams), who are not convinced he is the great wizard everyone’s been expecting. Reluctantly drawn into the epic problems facing the Land of Oz and its inhabitants, Oscar must find out who is good and who is evil before it is too late. Putting his magical arts to use through illusion, ingenuity—and even a bit of wizardry—Oscar transforms himself not only into the great and powerful wizard but into a better man as well.