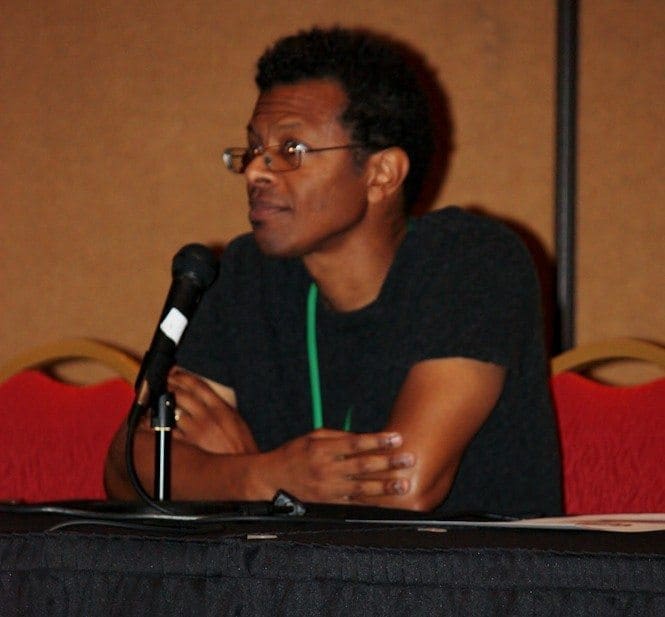 During Saboten Con, I had the opportunity to attend one of Phil LaMarr’s Question & Answer panels.

There were many great questions throughout the panel. Some of the questions were as follows:

Q: How do you know when you’ve done a good job in a role?

A:  I want to be able to say “I can’t wait for people to see this!” When this is accomplished, I know that I’ve done a good job in that role.

Q: What do you recommend for people who are interested in getting into voice acting?

A: The answer to that question applies to many aspects of life. I am a firm believer 10,000 Hour Rule which states that it takes 10,000 hours for someone to become an expert on something. If you are truly interested in doing something, you will put the time into it.

Q: What can you tell us about the rumor for a Samurai Jack movie?

A:  It’s going to be a 2D animated film that will finish off the story of Samurai Jack. So, for all you Samurai Jack lovers out there, GET READY!

Q: What/who was your main inspiration for voice acting?

A: (In order mentioned) Bugs Bunny cartoons (Phil stated that he is an amazing actor who is often overlooked.) Denzel Washington in Glory. Devil in a Blue Dress.

Q: What would you say your style is?

A: It really depends on the job but I try to make something for everyone to enjoy. From people who like Samurai Jack to people who continuously watch reruns of Everybody Loves Raymond.

When asked what type of work he preferred to be a part of, his answer was short and to the point “I’d much rather be in a good cartoon for a short while instead of a lead in a bad movie.” Although this seems like a fairly obvious answer, it caught me by surprise. Many people would rather be in the limelight in a movie as opposed to being behind a voice which may not get much public recognition for the voice actor. After all, it tends to be easier to remember a face than a voice in many cases.

Last thing he said to wrap the panel up was that what he does is basically a glorified temp job. You work and get paid and then wait to get something else. You might get an Oscar Award for a job that ended nine months ago! It’s not concentrate nor is it set in stone. You always have to take offers or look for them in order to continue to do this type of job. Many aspiring actors are not aware of this concept.

Overall, many of his answers made me conclude that he is still very audience geared after so many years. That does not seem to be common in many actors after years of being in the industry. His answers made me respect him much more and I hope to attend another convention where Phil LaMarr is a guest.