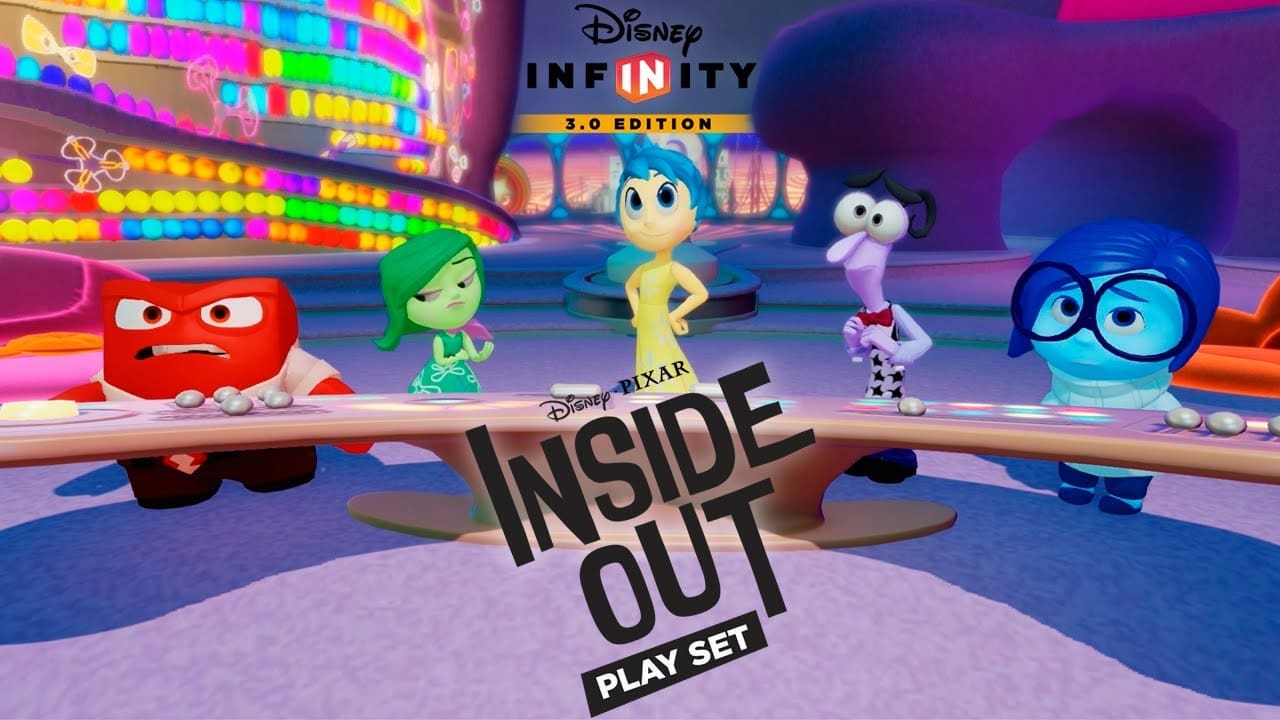 Just when I thought I knew all of what Disney Infinity had to offer, my world was turned Inside Out. Whereas the Twilight of the Republic play set had a very similar feel to the Toybox with combat and core gameplay, the Inside Out Play Set adds an entirely new style of gameplay: platforming. When I popped the Inside Out Play Set piece onto my Infinity portal I expected the same gameplay I got from Twilight of the Republic with an Inside Out skin on it but much to my satisfaction I was completely wrong.

The story of this Play Set picks up after the events of the movie, with most of the voice actors reprising their role. Throughout the game Riley’s emotions are running around the different areas of her imagination recovering memories, protecting her from nightmares, and fighting a creature so foul it would terrify anybody: broccoli. The levels themselves vary between 2D and 3D platforming which adds a very welcome change to gameplay with some truly challenging puzzles in some areas. There were even times when I had to phone a friend, or in this case spectators on Twitch, asking if they saw something I had missed. Each of Riley’s five emotions (Joy, Anger, Sadness, Disgust, and Fear) have their own advantages which can make challenges and puzzles easier. For example, Anger can walk on Lava with ease, Fear runs faster than anyone else, and Joy can float across gaps giggling all the while. Although certain puzzles cannot be completed without having the character figure, the puzzles crucial to advancing have little memory workers that can temporarily transform you into any emotion you’d like so you can help Riley. I found this sneak peek for the different characters absolutely genius, as it shows the value of having each figure showing it’s more than just a different skin like it sometimes felt with Twilight of the Republic.

There are a plethora of collectibles to hunt down in each of the levels which add small perks while in Headquarters although they don’t do much while exploring Riley’s imagination. These collectibles make the three star rank a little harder to acquire than in Twilight of the Republic in true platformer fashion. One of my favorite parts of making my way through the levels is the delightful commentary from whichever emotion you decide to play as. I was partial to Anger given my love of Lewis Black (who reprised his role) and being berated every time I fell off the stage or messed up on some puzzle put a huge grin on my face and kept me moving forward.

There were only a couple minor grievances that kept this play set from achieving its full potential. The first was that the story soon became irrelevant to the gameplay. The beginning of the game set up what I expected to be a good story, but the cut scenes soon became few and far between. The gameplay remained top-notch which kept me playing, but some story based motivation from the fantastic minds at Pixar would’ve put it over the top. The other issue was the relevance of leveling up. Whereas the combat-focused Twilight of the Republic relied on increased fighting skills to make levels easier as the story progressed, this was not the case in Inside Out. Although there are enemies in the levels, they are as scarce as the cut scenes and not detrimental enough to make leveling up necessary. While these skills will be relevant in various Toybox activities, skills that boosted platforming ability would have been nice.

Can you have your infinity characters fight each other? I’d like to see hulk fight some emotions

[…] For Infinity fun with different gameplay, check out the Inside Out Play Set review here. […]