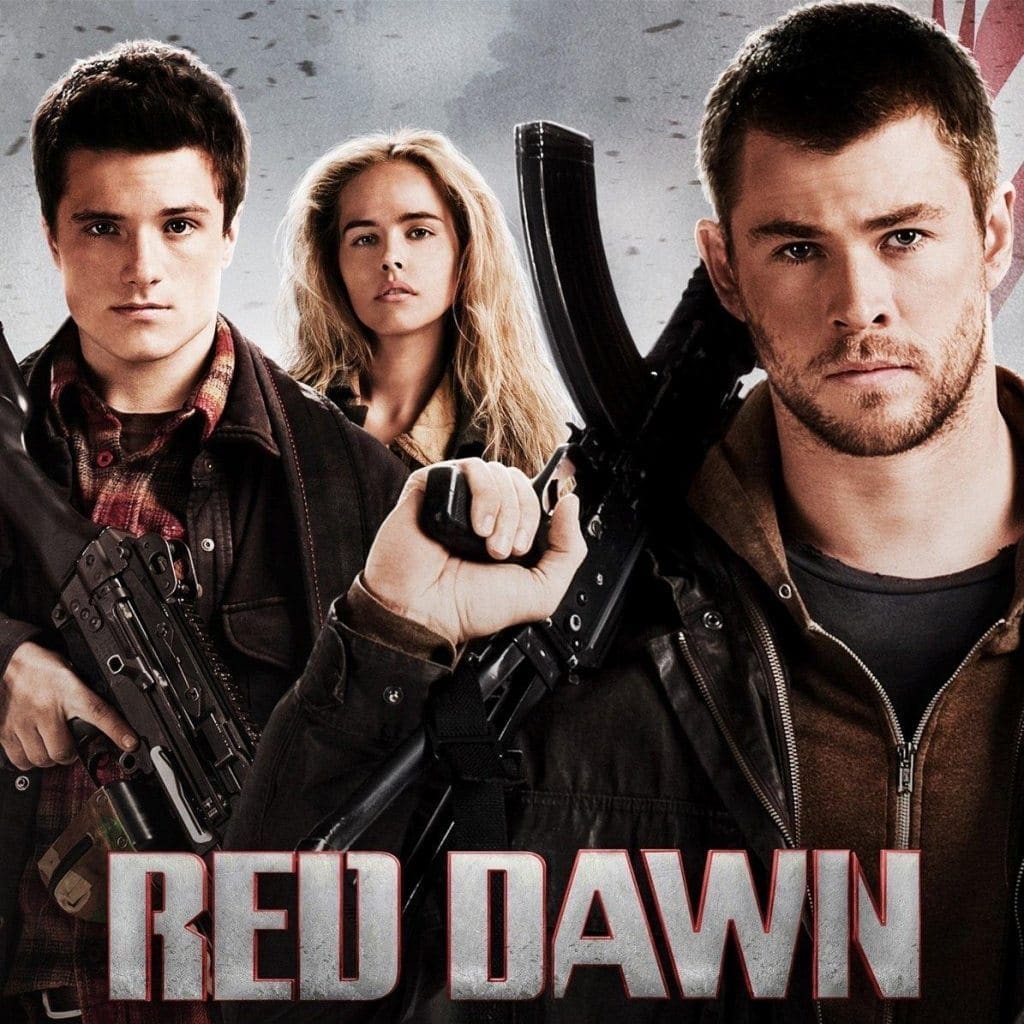 There is going to be a lot of pre-judgment from purists of the original Red Dawn. You shouldn’t remake a classic, they’ll say. Or, All remakes are shitty, and whatever else they can come up with. To be honest, I haven’t heard nearly as much backlash from this as I have, say, the new Robocop remake? Personally, I think the new Robocop looks bad ass, but that’s another topic for another story. Maybe it’s because the movie sat on the shelf for over a year that the chatter has died down. My point is, is that sometimes remakes can be awful [The Day the Earth Stood Still] and sometimes they can be better than the original [True Grit]. You really have to reserve judgment until you see the actual movie. Red Dawn lies more toward the True Grit end of the spectrum, but it doesn’t quite best the original.

The movie starts with a montage of news stories as the credits roll. They work as a prologue of sorts that explains the situation of the world and gives an insight into what’s about to happen. I found it particularly unnerving because it became hard to differentiate between the real news footage and footage that was created for the movie, if indeed it was created for the movie. Red Dawn then wastes no time getting into the thick of things when Spokane, Washington is invaded, which continues the tension with a white knuckle action piece while the kids escape town.

While the original echoed fears of a Russian and Cuban invasion, the updated version now features the North Koreans invading a more strategic and realistic state, Washington. Maybe I was missing something, but I always thought it was weird they landed in Colorado in the original.

The Wolverines in the update are more aggressive and brazen than in the original. Jed, played this time by Chris Hemsworth, is a U.S. Marine on leave and I found that more realistic as he was able to teach the rest of the group how to survive, shoot, and work as a team, so it was more believable when The Wolverines would attack an enemy location and know what they were doing.

Dan Bradley did an excellent job directing, as this is an action movie from start to finish, he fit right in. Some of the camerawork was a bit out of control during some of the action scenes, which made Michael Bay look like George Lucas, but coming from a stunt coordinator and second unit director background he was able to keep everything else in line.

When I go into a movie like this I expect loud noises, explosions, and gun fire, and I want to feel it in my seat. Too many times I go into movies and the sound effects guy has turned the bass way down and the treble way up. If you want to feel like I’m there with the actors, then make me feel it. I want to give props to whoever was in charge of that stuff in this movie. Explosions rocked the theatre and the gun fire made it feel like an actual gun battle was happening in front of us. I wanted to scream, America! at the screen while The Wolverines rallied their town into repelling the invading North Koreans.

The acting is a little one-dimensional at times and the two main characters are the weakest links in the bunch. I give Chris Hemsworth a little leeway though because he did shoot this movie over two years ago and he hasn’t quite mastered the North American accent yet, but he does give it his all, however his brother, played by Josh Peck, was a little hard to watch. He seemed whacked out of his gourde on cough medicine. Luckily the story places more emphasis on Hemsworth.

Red Dawn is a movie made to make America feel good about itself, and it succeeds.