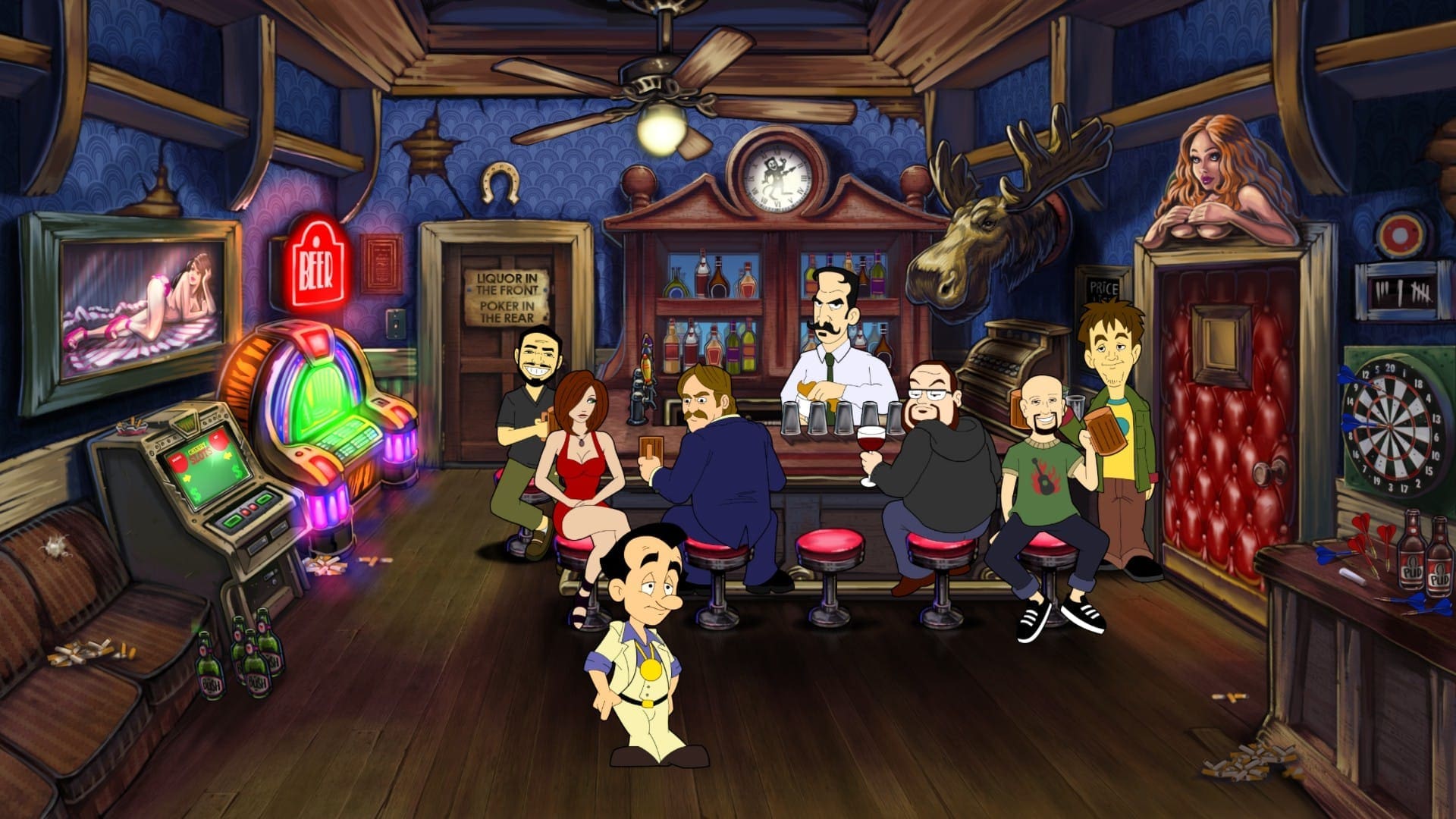 In the early part of last year a revolution of sorts began in gaming. That revolution being Kickstarter, the web-platform that allows you to post projects and get financial support from a community of people. (I’m sure you’ve heard of it, so I have no idea why I chose to explain it.) It’s now around 14-15 months later and the first of these early gaming projects has been released! That game is Leisure Suit Larry in the Land of the Lounge Lizards: Reloaded, a remake of the 1987 and 1991 game from Al Lowe. (I wrote a series of reviews a little over a year ago on the original Leisure Suit Larry game, as well as its sequels.)

[pullquote]Providing a narrator […] as well as having Jan Rabson reprise the role of Larry Laffer, gives the tale of love, perversion, and feelings not wholly unfamiliar a new lease on life. [/pullquote]In fact, instead of delving into writing a new back story for this game, allow me to quote myself from last year:

The original Leisure Suit Larry is the tale of Larry Laffer and his journey to city of Lost Wages (a clever play on Las Vegas) in search of the what all 40-year-old males are looking for: A way to lose his virginity. Isn’t that just adorable? Larry’s journey takes him down many paths in search of the right woman. Well, one path to be exact. Hey, this is a classic adventure game of the late-80′s; linear games were the bread and butter of the gaming world at this time. Larry can travel all around Lost Wages and its stylish five locations: the Convenience Store; Disco; Casino; Wedding Chapel; and the most famous bar of them all, as stated by Destructoid, Lefty’s Bar.

Looking for Love in Lost Wages

Larry; Larry Laffer is the very definition of a lovable loser. The man, for lack of a better qualification, is a character that is somehow unstuck in time. Larry, and what he represents, shouldn’t make sense in the year 2013, yet here we are looking at a new game starring the aged protagonist. “A new game?” you might be asking. Yes, this is a new game, because while the bones may belong to the classic point-and-click adventure game of 20+ years ago, it has been reimagined and rewritten to bring it into the 21st century.

The jokes, parts of the story, and even the puzzles have been rethought to both play up the nostalgia for those who played Leisure Suit Larry in the Land of the Lounge Lizards, while also making the game seem fresher in the eyes of a more modern audience. Honestly, after playing through it yesterday I am finding it hard to figure out if it is set in the 1980’s or 2010’s. The jokes work from the perspective of either era; particularly with the narrator regularly breaking the fourth wall to comment on the jokes themselves.

Speaking of that narrator, .** Our younger readers, or anyone that never played an LSL title will likely recognize Neil from his work as the voice of the codex in the Mass Effect series. This, for the record, is a total mindfrell for me and at least partially explains my fascination with both series. Providing a narrator to this classic Larry adventure, as well as having Jan Rabson reprise the role of Larry Laffer, gives the tale of love, perversion, and feelings not wholly unfamiliar a new lease on life.

**Update: Turns out I need to do my homework, as Neil Ross did not return for this game. From Hank in the comments:
“Neil Ross isn’t the narrator in this game, since Replay games couldn’t afford him. He was replaced by Brad Venable, who’s channeling Ross’ performance.”

The Times They Are a-Changin’

Being a remake of a remake of a classic game, there are obviously some changes in store. I already mentioned that some of the puzzles and jokes have been rethought in an effort to spice up the title, but that’s not the only reason for a change. Due to the success of the Leisure Suit Larry: Reloaded Kickstarter campaign last year, the folks at Replay Games were able to add in a new “conquest” for the “venerable” Larry Laffer. Jasmine is a lovely, as well as welcome addition to the game; one in which I will not spoil. While her storyline doesn’t top the joy and absurdness of one of my personal favorite love interests, Fawn, I will say that she adds a certain heat to the already enjoyable game. With the addition of Jasmine, the folks at Replay Games and N-Fusion Interactive took the liberty of reworking some of the overall structure of Leisure Suit Larry. In the old days Larry would have the option of tracking down a certain inflatable friend in the hotel room of Eve, the final conquest, inflating said friend, and following it out onto the deck where he would meet the aforementioned Eve. In the new game, things are changed up drastically. Larry finds the blow-up doll still in the closet of a hotel room, but not the same one as before. Said balloon friend is also in terrible condition, requiring of an item that is acquired from Jasmine. It’s a slight change, sure, but it changes up the flow and forces longtime Larry fans to rethink their strategies for completing the game.

On the less positive side of the equation that is Leisure Suit Larry: Reloaded is the loss of the original series point system. In classic Larry games you would accrue points for different actions during the game; some related to the story, while others were for random actions. In fact, the previously touched upon helium companion was one of these optional points experiences. In the original game you were able to simply walk up to Eve on her balcony, but if you stopped off and inflated the sexual flotation device it would leak, flying out onto the balcony and netting you 5 points. What was the ‘point’ of this points system? What did it gain you? Well back in those days games needed points to sell, so they served little purpose other than offering a sense of achievement to players. In some cases they did also unlock easter eggs, usually graphic ones at that. Obviously, in the era of achievements and trophies it was decided that points weren’t needed, which may in fact be true. All I know is that due to an unspecified bug or glitch I lost the ability to get achievements via the Steam version of the game at around the halfway point. Not a big a deal in the long run, as I intend to play the game a few more times in an effort to see everything that needs to be seen.

Laffer is the Best Medicine

When it comes down to it, Leisure Suit Larry in the Land of the Lounge Lizards: Reloaded is not some mind-blowing modern marvel of the gaming medium. What it is, is a classic game brought back to life by its original creators for its most loyal fans. Sure, there are plenty of people not familiar with Larry Laffer or his exploits who will love this new title, but ultimately it was made for people like myself; people who played these games before they were old enough to get half the jokes.

If you’re a fan of the point-and-click adventure genre of yesteryear, or simply looking for a change of pace, you would be hard pressed to find a game as fun and funny as LSL: Reloaded.

Now, I need to ask Al Lowe and the fine folks at Replay Games a simple question: When will we see the announcement of Leisure Suit Larry Goes Looking For Love (In Several Wrong Places): Reloaded, my personal favorite Larry game, or possibly even a return to my first MMO-styled game, Leisure Suit Larry’s Casino?

Neil Ross isn’t the narrator in this game, since Replay games couldn’t afford him. He was replaced by Brad Venable, who’s channeling Ross’ performance.

Neil Ross is not the Narrator.