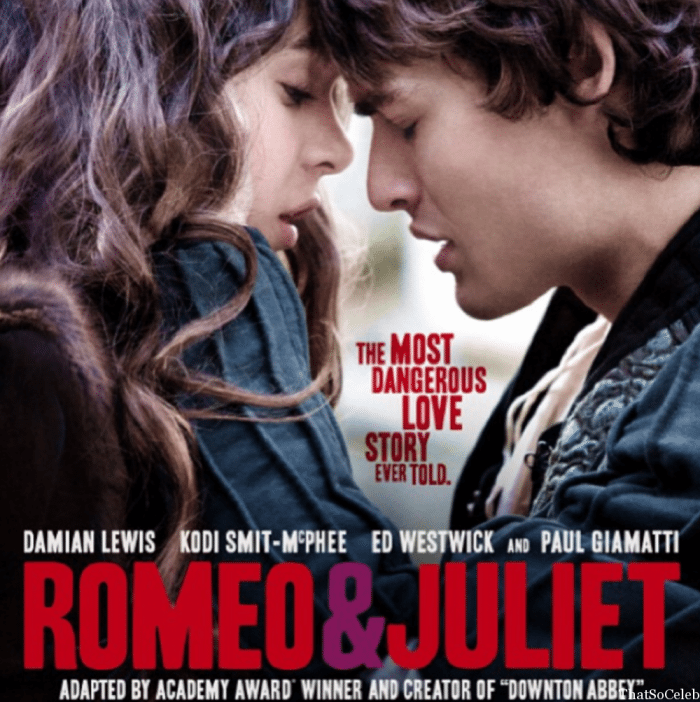 I was really excited about this movie. I really liked Romeo + Juliet, the 1996 adaption starring Leonardo DiCaprio and Claire Danes. It was silly fun, but I felt it stayed true to the original, and the performances were rock solid and great. So yeah, I was really excited to see a new update to this classic story. I was, unfortunately, very let down.

You all know the story: Boy meets girl, they fall in love, they’re from rival families, they marry anyways, and then [SPOILER] they both die at the end. If you don’t know the story, go hit yourself with Shakespeare’s complete works, and then read the darn play. Or go see Romeo + Juliet. Just don’t go see this, if you’ve never seen any other version before, because it might ruin it for you.

There were a couple stand-out performances, unfortunately they came from the ensemble. Friar Laurence (Paul Giamatti) and the Nurse (Lesley Manville) were my two happy highlights of the film. The Friar was played with a wonderful intensity, going from somber to sarcastic to happy with such ease and quickness, you can’t doubt Giamatti’s skills as a dramatic actor. The Nurse was hysterical, over-the-top, and just a hoot-and-a-half. It’s sad, though, when the first two characters I praise are not the titular ones. Booth’s Romeo is just confusing. He gazes longingly, but his eyes seem blank. He says the words, but he either mumbles or shouts them, and either way, there’s no feeling behind it. Steinfeld delivers all of Juliet’s lines in a conversational way, losing the beautiful cadence of the iambic pentameter. The supporting cast, minus the Friar and Nurse, aren’t much better, either meandering their way through the lines, screaming them unnecessarily, or seeming very apathetic towards the entire ordeal.

Oh, if you’re a Shakespeare geek, be forewarned: Fellowes changed the dialogue. There are still a lot of the original lines from the play, but there are enough changes to be unsettling and distracting. As for everything else, well, it was all just “okay.” The costumes were decent, and the sets were, too. At times, actually, the sets were more interesting than the exchanges between Juliet and Romeo, which was really depressing.

I had so hoped to like this new version, but I’ve got to say I really didn’t. I’m gonna go watch the DiCaprio/Danes version now, so I can remember why I used to like the play.

For the blandness, the boredom, and the badness, I give Romeo and Juliet…

About Romeo And Juliet

Synopsis: Romeo and Juliet secretly wed despite the sworn contempt their families hold for each another. It is not long, however, before a chain of fateful events changes the lives of both families forever.