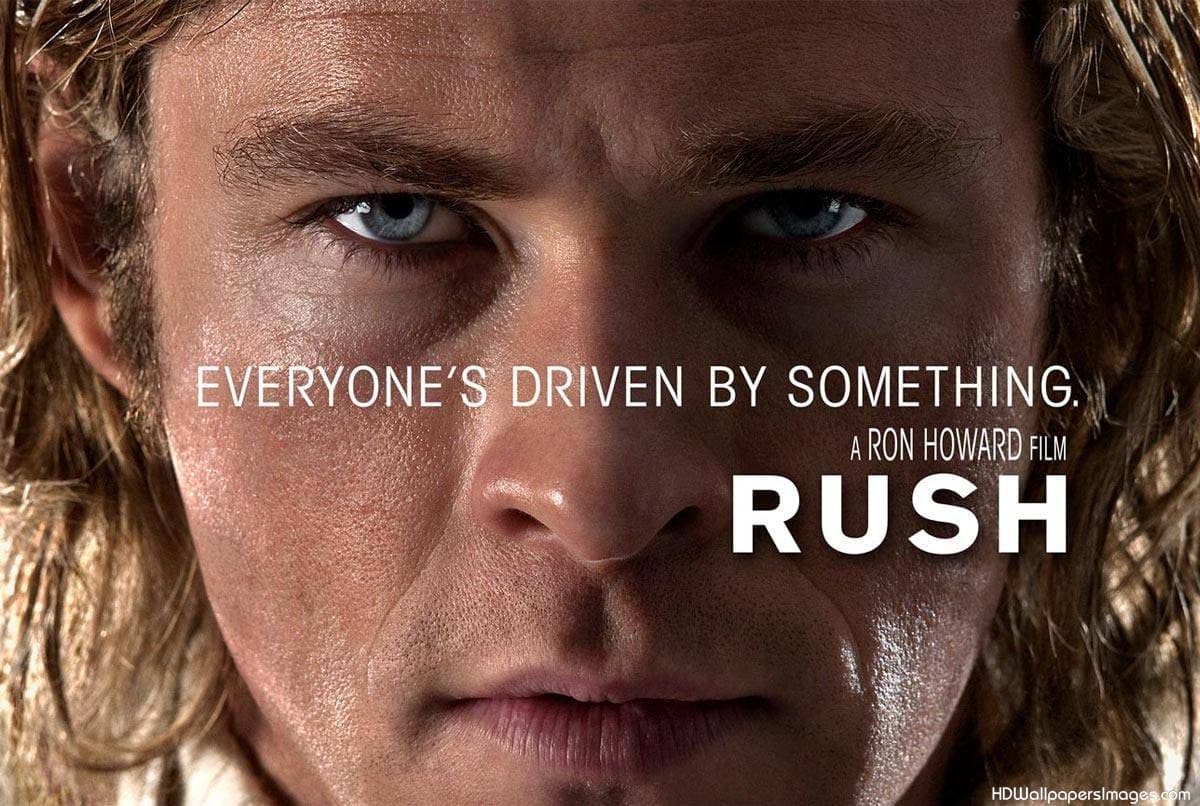 Mostly known nowadays for his directing talent, Ron Howard is also synonymous with his acting roles on The Andy Griffith Show and Happy Days in his youth. The transition from being in front of the camera to being behind it began in 1977 with Howard’s directorial debut; the absurdly bad car-chase comedy entitled Grand Theft Auto. From there he made great strides into the more drama-filled film realm with hits such as Cacoon, Backdraft, and Apollo 13. He has always had some comedic sensibilities with his films but has continually steered in more of the real-life dramatic path with the stories he wishes to tell. This can undoubtedly be seen in Howard’s new film Rush; the true story of the Formula One rivalry between James Hunt and Niki Lauda that took place in the 1970’s.

Two men, two different lifestyles, one goal: to win it all. James Hunt (Chris Hemsworth) is a British playboy who loves to race but also loves having a new lady in bed every night. Niki Lauda (Daniel Brühl) is a no-nonsense Austrian racer who believes that he can accomplish anything he sets his mind to. When at a lower-ranked race Hunt causes Lauda to crash his car, Lauda becomes fed up with Hunt’s arrogant ways and a rivalry between the two men begins. Both men rise through the ranks to compete in the premiere F1 Gran Prix in 1976 where the majority of the film takes place.

While many posters and advertisements peg Chris Hemsworth as the star of Rush, I would almost say that Daniel Brühl should get top billing. He is able to portray Lauda in a way that is both charismatic and stern at the same time. He is a troubled man; he wants to win but he wants to do it in a very diplomatic and by-the-rules sort of way. The only thing stopping him from achieving his goal is Hunt who he sees as a stain on the F1 reputation. Hunt on the other hand views Lauda as an old man who is set in his ways and doesn’t see the fun in life. Hemsworth brilliantly represents the phrase “you only live once” as he shows that charm and perseverance can help you achieve things you once thought where unachievable. Both actors are able to dig deep into who the real men are why they went to all the trouble to get behind the wheel of a drivable deathtrap in the first place.

Not since Apollo 13 have I watched a Ron Howard film where I couldn’t take my eyes off the screen. The visceral nature of astonishingly well composed and captured images encompasses the film in its entirety. The heart-pounding sounds of F1 race cars flying by at breakneck speeds encompass your eardrums in sonic bliss. Taken as a whole, the aural and visual aspect of the film is a triumph of what a modern day masterpiece should be. There isn’t one iota of a poorly shot frame or audio blunder that took me out of the film while viewing it. This is what a master director like Ron Howard is capable of and it is truly a viewing experience unlike anything you’ve seen this year.

There isn’t one parcel of spec of an atom that I disliked about this film. It is truly a dazzling portrayal of humanity’s will to win and what one has to go to in order to achieve the impossible. Ron Howard has set the screen on fire yet again and created a magnum opus that has to be seen to be believed. If there is one film to see this year Rush would be it so make sure not to let it pass you by.

Synopsis: The true story of the rivalry between Formula One race car drivers James Hunt and Niki Lauda.