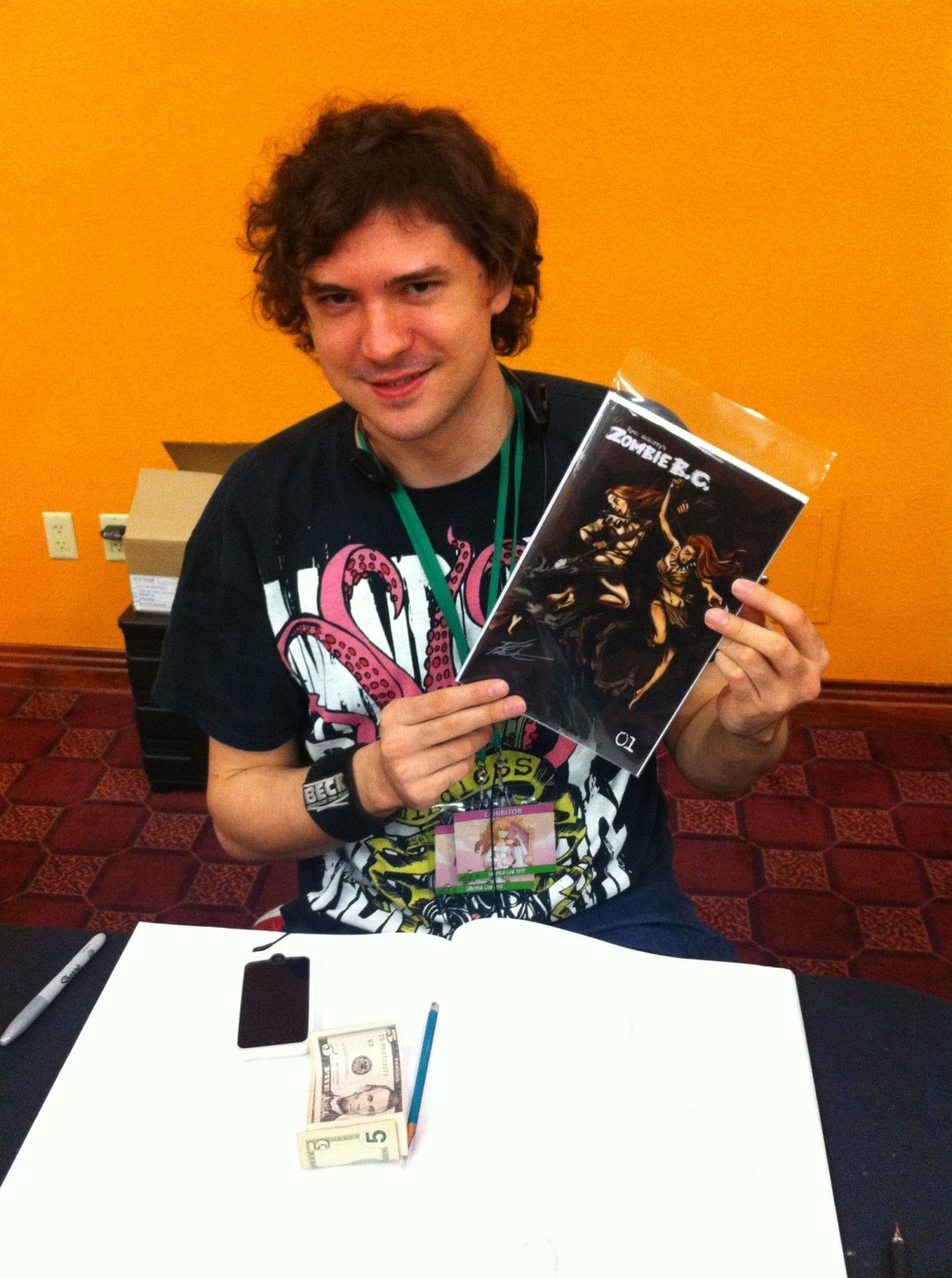 Glendale, AZ – This past weekend at Arizona’s biggest anime convention, Saboten Con 2012, I was able to chat with local Arizona comic book creator/digital artist/traditional illustrator/bad-ass Ryan Comstock-McMurry. We talked about his new comic book Zombie B.C. that is self-published with the help of Ready Comics.com and debuted at Saboten.

Zombie B.C. is not your typical zombie book. It is set one million years B.C. where we witness the first zombie attack ever. It’s not really described how the first zombie was infected, which might be described in later issues, but we get to witness the gore-filled bloodshed if there was to be an attack in the B.C. era.

The book itself is fantastic. There is no dialogue which is great and lets Ryan artwork truly shine here. The fine line work is awesome and inks are heavily detailed. My favorite panel is an outdoor shot of the moon with clouds surrounding it but the grey tones fits perfectly with the black & white tones, which is something I haven’t really seen in B&W art books. The gore is subtle but yet beautiful at the same time. This book is a must for any zombie fan. Lastly, we even get a little sneak peek at the creation process and layout process which is something I enjoyed very much.

I was also able to chat about comic books that influence his work and some of his favorites are DC New 52’s Nightwing written by Kyle D. Higgins and artwork by Eddy Barrows , and Batman written by Scott Snyder and drawn by Greg Capullo. Ryan is a huge Dick Grayson fan and also Deadpool fan. He remembers reading Dick Grayson/Tim Drake comics when he was small and having a good time.

The story is great and the artwork is stellar but it doesn’t end there yet. We are treated with a nice cover by local model/artist Aurora O’Brien and with the help of Steve Rude. It’s one of those covers that catches the eye and makes you pick up the book and check it out.

Depending on the sales this book could either be an ongoing or a four issue mini-series. Ryan stated he could end the series in the second issue but wishes for it to keep going and also keep pumping out more covers by the beautiful Aurora O’Brien.  So pick this up and support local talent! “With Seoul” by BTS Crashes the Servers!