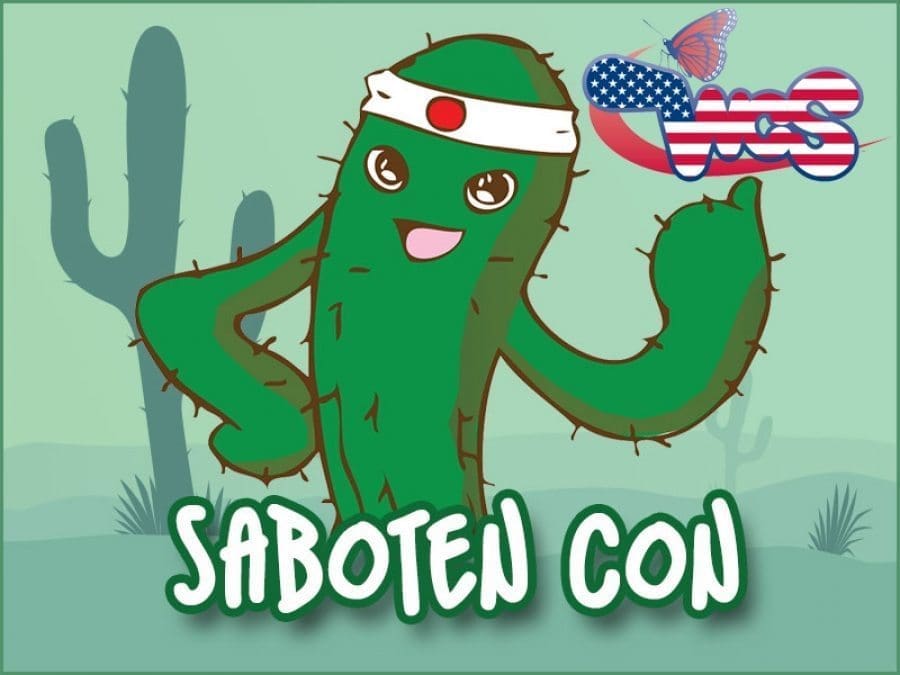 Another year, another visit to Arizona’s biggest anime convention, Saboten Con. This year proves to be even bigger and better than last year’s, and has a lot to look forward to. Taking place Labor Day weekend and now sporting a 4-day event, Saboten Con runs from August 29th through September 1st. It will be held at the Renaissance Hotel & Suites in lovely Glendale Arizona, located in the Westgate shopping area. Thanks to the successes of last year, Sabo is bringing more exciting guests and programming for everyone to enjoy. And with all the eating and shopping areas around the hotel con area, there won’t be a shortage of things to do at this years event.

But, let’s get down to what everyone wants to know, the guests and the events that people can experience at Saboten Con. Sabo boasts some great guests from all around the world, from cosplay, anime, artists, musicians, and gaming guests.

For costuming, Sabo is going global. Alodia Gosiengfiao, known as one of the biggest cosplayers in the world, hailing from the Philippines, is involved in everything from music, to TV shows, fashion, and of course, cosplaying. Continuing with the international costumers, Giada Robin, one of Italy’s top cosplayers and model, has done several costumes from different anime and video game series will be visiting us. Joining them is Living Ichigo, a cosplayer best known for his Dragonball Z costumes, and gym regiments. California native Chris Tang, takes mecha costumes to a whole new level when it comes to series like “Tiger and Bunny” and “Gundam”. Vegas cosplayer Electric Lady, who has been involved with companies like Funimation and Crunchyroll, is known for her beautiful, well-crafted costumes. AZ Powergirl, a local cosplayer has been on her own Magic the Gathering card and has done work with Marvel Comics round out the cosplay guests.

Along with the cosplay guests, Sabo has an impressive roster of voice actors as well. Derek Stephen Prince is a seasoned anime and video game voice actor who has worked on “Kingdom Hearts” and “Digimon”. Robert Axelrod, known for his work on “Power Rangers” as the voice of Lord Zedd, has also been in several feature films. Lauren Landa an anime and video game voice actress has voiced the roles of Kasumi in “Dead or Alive 5” and Kyoko from “Madoka Magica”. Anime voice actress, Alexis Tipton, is known for her role as Saya from “Blood C”. D.C. Douglas, voiced the character Legion in the popular video game series “Mass Effect”. Funimation voice actor Ian Sinclair, is the voice of the popular anime character Dandy in the new anime, “Space Dandy”.

Last but certainly not least when it comes to guests, as usual, Sabo has a great musical lineup. Japanese songstress and gothic Lolita fashionista, Iruma Rioka, Japanese rock singer, Kazha and Moon Stream, a Japanese visual style rock band will all be holding musical events that are sure to be a blast.

Of course, Sabo has more than just the guests to look forward to. Programming has gotten bigger and better, and will even host the World Cosplay Summit Qualifiers along with the annual Cosplay Masquerade and J-Fashion show. Along with that, three raves will be held this year, all with different themes. Friday’s being, “Fairytail”; Saturday is “Attack on Titan”; and Sunday will be, “High school of the Dead”. And after the success of them last year, Saboten Con is bringing back the popular pool parties, both themed as well. Saturday’s will be “Pokemon” while Sunday’s will be “One Piece”.

Needless to say, it’s looking like it’s going to be another great year! Make sure to come check it out at the Renissance Hotel & Suites in Glendale Arizona, held from Friday August 29th to Monday September 1st. Badges are now on sale, full event passes are $45, Friday – $20, Saturday – $30, Sunday – $30, and Monday only, $25. Or, if you want to get the best experience you can, the Otaku Pass is still on sale for $500.

For more information on the convention or to purchase your badge, please go to Saboten Con’s website at www.sabotencon.com.

SAILOR MOON R: THE MOVIE | Big Screen Debut In The...