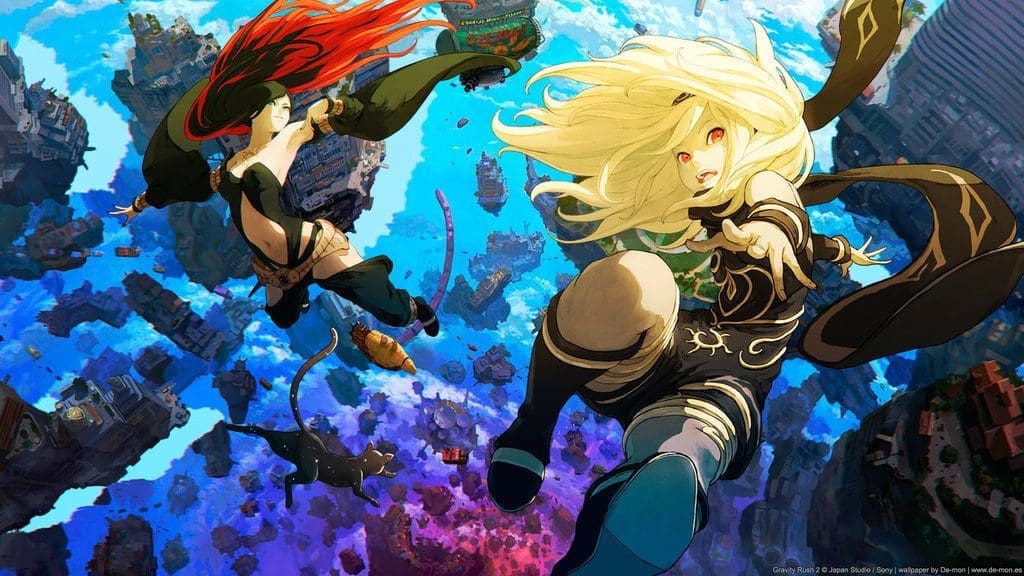 Back in 2012, the original Gravity Rush released on the PlayStation Vita. The protagonist, Kat, wakes up in a mysterious town surrounded by storms, alongside a mysterious cat with the uncanny ability to manipulate gravity. With the press of a button, “Gravity Queen” Kat could negate her own gravitational pull and any nearby objects and shift the effects of gravity in any direction, allowing her to run on walls and essentially fly by falling into the sky. This was a novel and extremely satisfying mechanic paired with the floating, labyrinthine city of Hekseville and its fun and memorable characters. Of course the Vita wasn’t exactly a huge success, so this gem was left undiscovered by many people. Sony attempted to remedy this issue by releasing Gravity Rush: Remastered on the PlayStation 4. It was a unique adventure built to take advantage of the Vita’s rear touch screen and gyro controls, but the remastered edition was a fine addition to the PS4 library. It was a fun, charming adventure with some unfortunate technical issues likely due to its handheld origins. Gravity Rush 2 is more or less the same experience on a much larger scale. Taking advantage of the PlayStation 4 hardware, Gravity Rush 2 brings Kat and friends into a much larger, more detailed and populated world with plenty of activities to engage. The story picks up where the first game left off…sort of. There is actually an animated short, Gravity Rush – Overture, that acts as a prologue to the story as well as an introduction to some of the major characters. Kat, her feline companion Dusty, fierce rival turned best friend Raven, and generally useless yet bafflingly helpful slacker Syd all make a return to the beautiful, enormous city of Jirga Para Lhao. The new city is easily one of Gravity Rush 2’s highlights, showing off the improvements to the unique graphical style and otherworldly design of the series. The sense of scale, colorful crowded streets, and wonderful soundtrack make for an excellent first impression, surpassing the original in just about every way. It’s unfortunate this first impression is soured once the new coats of paint start to wear off.

For the record, I really enjoyed the original Gravity Rush, opting to play the improved remastered edition. Overall I think the game was definitely good but not great due to the incredibly stubborn camera and fairly bland combat system with battles that dragged on far too long. Kat’s charming characterization and Hekseville’s unique design kept things engaging enough for me to play to the game’s conclusion, but a fair chunk of it was irritating, forcing me to second guess my decision to complete the story. Gravity Rush 2, despite the lessons learned and criticism from fan feedback disappointingly retains most of these same flaws, while improving a bit in other areas. However, at the same time, it also introduces its own unique issues not prevalent in its predecessor. The original camera system desperately needed an overhaul when it came to keeping up with the constantly changing angles due to Kat’s gravity shifting and the flood of enemies known as Nevi sending a barrage of attacks from every angle. The camera largely remains the same in GR2 with little noticeable improvement and absolutely loses its mind in tight spaces. While the “soft” lock-on system helps a bit in directing attacks, it’s not enough to overcome the constant fighting of the camera. The combat also hasn’t improved too much in my opinion. While serviceable, I still feel the battles either take far too long to end, not helped by their repetitive nature, or are entirely too simple if you take advantage of Kat’s thankfully improved stasis field attacks. A nice mid-point between these two extremes could have been a good thing. Boss fights against giant Nevi are also about as cumbersome as they were in the original and gravity sliding, a special technique used for quick movement, is inexplicably harder to manage.

Yet none of those issues compare to the follicle-ripping frustration that is Gravity Rush 2’s stealth missions. The game’s engine was clearly not built around the idea of intricate stealth, but for what whatever reason the developers decided to take the idea and run a marathon with it. These sections, both story and side mission variants, do a less than stellar job of conveying where to go and when to hide, too often resulting in an instant failure and relying on an unfair amount of trial and error to complete. I don’t have an exact number for the recurrence of these missions, but it’s somewhere in the vicinity of “entirely too many”. So is the game a huge waste of time and money? Not at all, what gave you that idea besides the large quantity of negativity I just threw in the air? Fortunately, most of the flaws are balanced out by some exemplary additions. New to Gravity Rush 2 are two unique gravity styles activated by swiping a direction on the controller’s touch pad. The ultra light Lunar style reduces the effect of gravity allowing Kat to jump abnormally high and incredibly far, also adding a special homing gravity kick and special stasis field properties in combat. The Lunar style is my personal high point and favorite addition to the game, as leaping from place to place is unreasonably satisfying. As long as the area is wide open, at least. Using this style comes at the expense of losing traction on the ground, so it’s easy to slip up. The Jupiter style strengthens the effect of gravity, making Kat heavier than usual but increasing her overall strength. Kat’s gravity kick receives a devastating shockwave effect if it connects to the ground, instantly destroying weaker foes. While Jupiter style increases Kat’s falling speed, making traversal a bit faster, it’s mostly used during combat to take out smaller and armored Nevi with ease. Used correctly, tedious fights can become much more manageable.

Controls have been simplified to a point, and everything feels a bit snappier when flying, fighting, and performing special techniques. Side quests have been improved, often adding a hilarious twist that really highlights Kat’s overly helpful nature. One standout quest involved delivering a foul-smelling package across the city while taking breaks to set it down for some much-needed fresh air before passing out. Another involved an intricate scene where Kat had to act like a mind controlled zombie by pointing at the sky when deemed suspicious by other mind controlled people. The game oozes charm during these moments and acts as a nice palette cleanser. Challenge missions make a return, offering gems as a reward for completing timed trials such as delivering newspapers or defeating a wave of Nevi. The new characters are a great fit for the series as well, particularly the leader of the Banga Settlement, Lisa, her adopted daughter Cecie, and the Sun Shipping merchants Vogo and Fi. Ore mining is another new activity offered for collecting precious gems used to power up Kat’s abilities, and talismans, accessories offering bonus effects and special skills. These include power boosts to certain gravity styles, energy reductions for special techniques, and even attracting wandering dogs for some reason. Talismans can hold up to three skills and there are three different talisman types, so a total of nine skills can be equipped at any given time. There is a bit of online functionality available as well. Other players may complete challenges and have you race their ghost, and random treasure boxes may appear in the world alongside a clue for where to find it in the form of a picture taken by another player. Early in the game, Kat receives a camera and the ability to take pictures anywhere in the world (some missions even require use of it). Alongside the treasure hunts, these pictures can be shared on social media and even rated by other players online, earning a special currency known as Dusty Tokens, used to unlock special items and costumes. Speaking of costumes, Kat can earn and wear a fair amount of detailed, alternate outfits and proceed to take selfies with special camera filters, props, and unlockable poses. It’s a fun diversion, but completely optional if you’re not into that kind of thing.

Gravity Rush 2 is overall an entertaining, but imperfect adventure much like its predecessor. As a sequel, it puts the original game to shame with its sense of scale, improved controls, new gravity styles, and a finely crafted world.  It’s regrettable that many of the same issues of Gravity Rush are retained while introducing new frustrations, as this holds back the experience from outright surpassing the original. I can still recommend the game to those who enjoyed the first, as a lot of the unanswered questions left from the previous entry are answered here (but definitely not all). To be fair, the story is not yet complete, as a lengthy bit of DLC will be released in March focusing on Raven and some of the events of her past, adding even more value to an already content-rich product. It’s flawed, but has moments of brilliance that may be worth your time. Not a must have, but definitely something to keep on your radar.

Gravity Rush 2 is available for PlayStation 4.