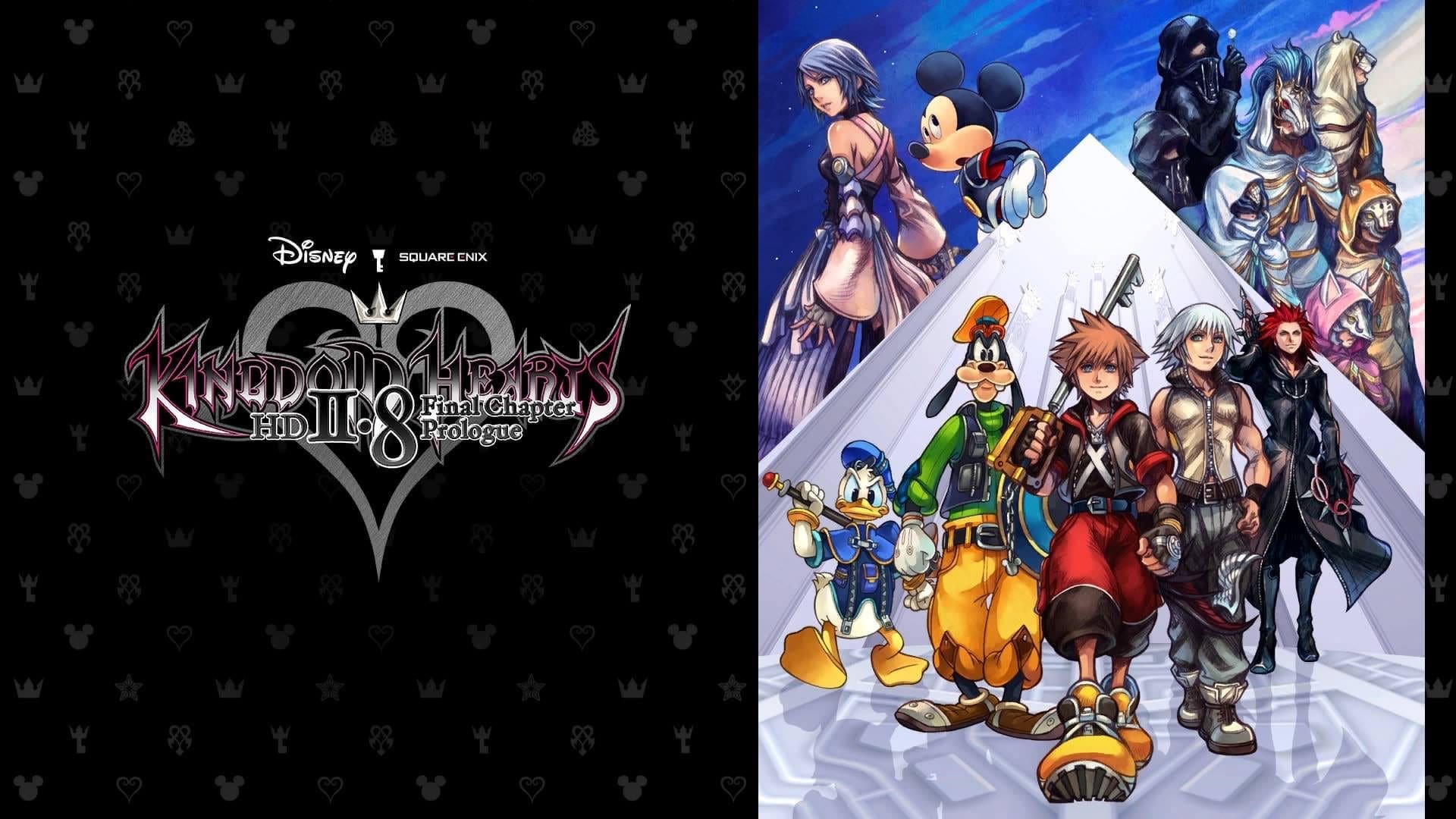 It’s been over a decade since our last main entry in the Kingdom Hearts franchise and while we’re still a long way off from Kingdom Hearts 3, this new collection is a sizeable step in the right direction. Kingdom Hearts HD 2.8 Final Chapter Prologue is the third collection for this drawn out series but unlike its predecessors, it has a fair share of brand new content. The Kingdom Hearts collections follow the same basic rule of thumb in their lineup: two playable games and the cinematics for a third. Kingdom Hearts HD 1.5 and 2.5 were both made up of existing games and cinematics with a prettier resolution whereas 2.8 is comprised of an HD remake of the 3DS title Kingdom Hearts Dream Drop Distance, a new “game” Kingdom Hearts 0.2 Birth By Sleep -A Fragmentary Passage-, and Kingdom Hearts X Back Cover, a cinematic movie based off the mobile game Kingdom Hearts X. While Square Enix’s naming practices leaves a lot to be desired, they certainly know how to curate a solid spread of content. All three pieces of this collection have major implications for Kingdom Hearts 3 and try their best to get everyone up to speed; weaving together as much of the notoriously convoluted storyline as it can. Kingdom Hearts Dream Drop Distance HD is by far the beefiest piece of this collection and does the lion’s share of catching you up on the six titles that preceded it across various consoles, handhelds, and mobile phones. The story follows series’ protagonist, Sora, and his best friend, Riku, as they undertake the Mark of Mastery exam under the tutelage of Master Yen Sid (the man who puts the “Sorcerer” in Sorcerer’s Apprentice). The boys are tasked with awakening the hearts of seven sleeping worlds, a skill that will prove vitally important when their adventures continue in Kingdom Hearts 3. I cannot overstate how helpful Dream Drop Distance was in catching players up on the wonderfully complicated story of Kingdom Hearts. The story in Dream Drop Distance was written in such a way that each preceding game was referenced in some major way during a cinematic, after which players have the option of a text-based synopsis of the aforementioned game. This proved helpful to someone like myself that takes pride in his, or her, ability to navigate and explain the intricacies of this series so I can only imagine how helpful it is to new players just jumping in.

In Dream Drop Distance, players will switch between Sora and Riku each with their own Command Deck, where you arrange the spells, items, and attacks you wish to use in battle. Each command has a cooldown that occurs even if the command is interrupted, which can be the difference between life and death if you’re trying to heal yourself. Because the boys are technically dreaming, the usual support of Donald and Goofy is replaced by that of benevolent dream eaters known as “Spirits”. Dream Eaters, a new creature type introduced in Dream Drop Distance, serve not only as party members for Sora and Riku but also as antagonists in the form of malevolent “Nightmares”. Some of these nightmares served as bosses and have some of the best enemy names I’ve ever seen, including a squid-like boss called “Brawlamari”, a magically-gifted bird called “Spellican” and of course a burrowing rodent called “Holey Moley”. As angry as I may have gotten during some boss battles, I just couldn’t stay mad at the vibrant, diverse roster of nightmare bosses. As you progress through each sleeping world your party will consist of two spirits which will fight beside you while a third will give you various abilities without the combat assistance. The spirits with you will not only give you abilities gained through building a relationship with them but can also empower you for brief periods of time, much like Sora’s drive forms in Kingdom Hearts 2. The abilities these spirits can give you should not be ignored and can be incredibly important in battle. For example, Meow Wow not only gave me access to multiple levels of Cure but also gave me a passive ability that made it so I couldn’t take damage while healing myself. I kept Meow Wow in Sora’s immediate party, but I also wanted Riku to have this life-saving ability so I kept Meow Wow as Riku’s third, unseen party member. Having the benefit of this third spirit was incredibly helpful, especially if you’re crazy like I am and insist on keeping your first two spirits throughout the game for appearance’s sake despite some seriously awesome alternatives.

I enjoyed the majority of my time with Dream Drop Distance HD. The controls on console, while dated, suit the series much better than handhelds did, the story progressed past Kingdom Hearts 2 in an interesting way with plenty of nods to past titles, and clear progress was made toward Kingdom Hearts 3. The music is visceral, moving, and nostalgic; as always one of the cornerstones of the franchise. As much as I enjoyed this game, there were two major faults that plagued me almost the entire way through. The first flaw is that some bosses relied entirely on one specific mechanic in order to beat them but wouldn’t point this out to the player. While I’m all for a challenging encounter, skewing the battle in such a way that it requires an ability you may not have had the chance to equip was particularly frustrating. The second major flaw was that the dash/dodge ability was tied to the same button prompt that was used to block. There’s a major difference between putting your guard up and dashing repeatedly mid-battle. These flaws were particularly annoying when both issues arose at once. Multiple boss fights relied on blocking and counter-attacking regardless of how proficient you are at spells or attacks. When an enemy can instantly attack you from across the stage and a life-saving block turns into a dash into instant death had me trying to break my controller on more than one occasion. There were also a handful of technical hiccups I ran into whether it was a boss simply disappearing (forcing me to load my last save) or the wrong outfit being rendered when switching cutscenes. These hiccups were scarce enough to not leave lasting impression, but I’d be remiss if I did not at least mention them. My gripes aside, Dream Drop Distance is a solid foundation for this collection and a perfect crash course leading up to Kingdom Hearts 3.

It’s a stretch to call the next piece of this collection a “game”, but that doesn’t change the fact that it’s my favorite part of the whole package. Kingdom Hearts Birth By Sleep 0.2 -A Fragmentary Passage- follows Aqua in the Realm of Darkness as she tries to fight off the darkness (it also manages to find a more complicated title than 358/2 days, but I digress). Fragmentary Passage brings back a HUD we haven’t seen since Kingdom Hearts 2. No command list, no cooldowns, just three options: Attack, Magic, and Items. This simpler combat system is where Kingdom Hearts truly shines. The combat isn’t without improvements, however. Command Styles have made a return from Birth By Sleep, giving Aqua increased strength and new combos based on which attacks or spells she decides to use. Shotlock also makes a comeback, a potentially devastating retort for large bosses or smaller swarms alike.

The best way to describe Fragmentary Passage is “a taste of things to come”. The game doesn’t make up a reason for Aqua to lose her power from Birth By Sleep, she’s a Keyblade Master and she acts like one too. While the spell selection is limited, they’re all their final forms and you truly feel like a force to be reckoned with. Perhaps my favorite part of Fragmentary Passage, and certainly the most unexpected, was the fair share of puzzle-solving sections where Aqua was tasked with clearing various challenge rooms. These challenges made me truly explore every nook and cranny of the map and I cannot wait to see what puzzles are in store for future titles. Whether it’s the higher resolution graphics, the updated combat system, or the introduction of a multitude of accessories, Fragmentary Passage serves as a fantastic demo for Kingdom Hearts 3.

The final piece of this collection is Kingdom Hearts X: Back Cover, a cinematic movie based off of the mobile/browser game, Kingdom Hearts X. Back Cover follows the story of the Foretellers, six apprentices of a secretive master. Five of the apprentices led five distinct unions which ultimately led to the first keyblade war. The sixth apprentice, as well as their master, wear the same black robes as the members of Organization XIII. While the reason behind this shared wardrobe is hinted at in the movie I won’t spoil any of the fun here. The five union leaders discover a traitor is among them and must try to out the traitor and save the world from falling into darkness. While I enjoyed seeing some of the deeper lore of the series, the movie suffered from a multitude of confusing time jumps and ends rather abruptly. As the credits rolled I had to rewind just to make sure I didn’t accidentally skip a scene. While some questions were answered in this movie, far more questions were asked which left me wanting more (and not in a good way).

Get an expert academic writing assistance. We can write any paper or post on any subject within the tightest deadline.