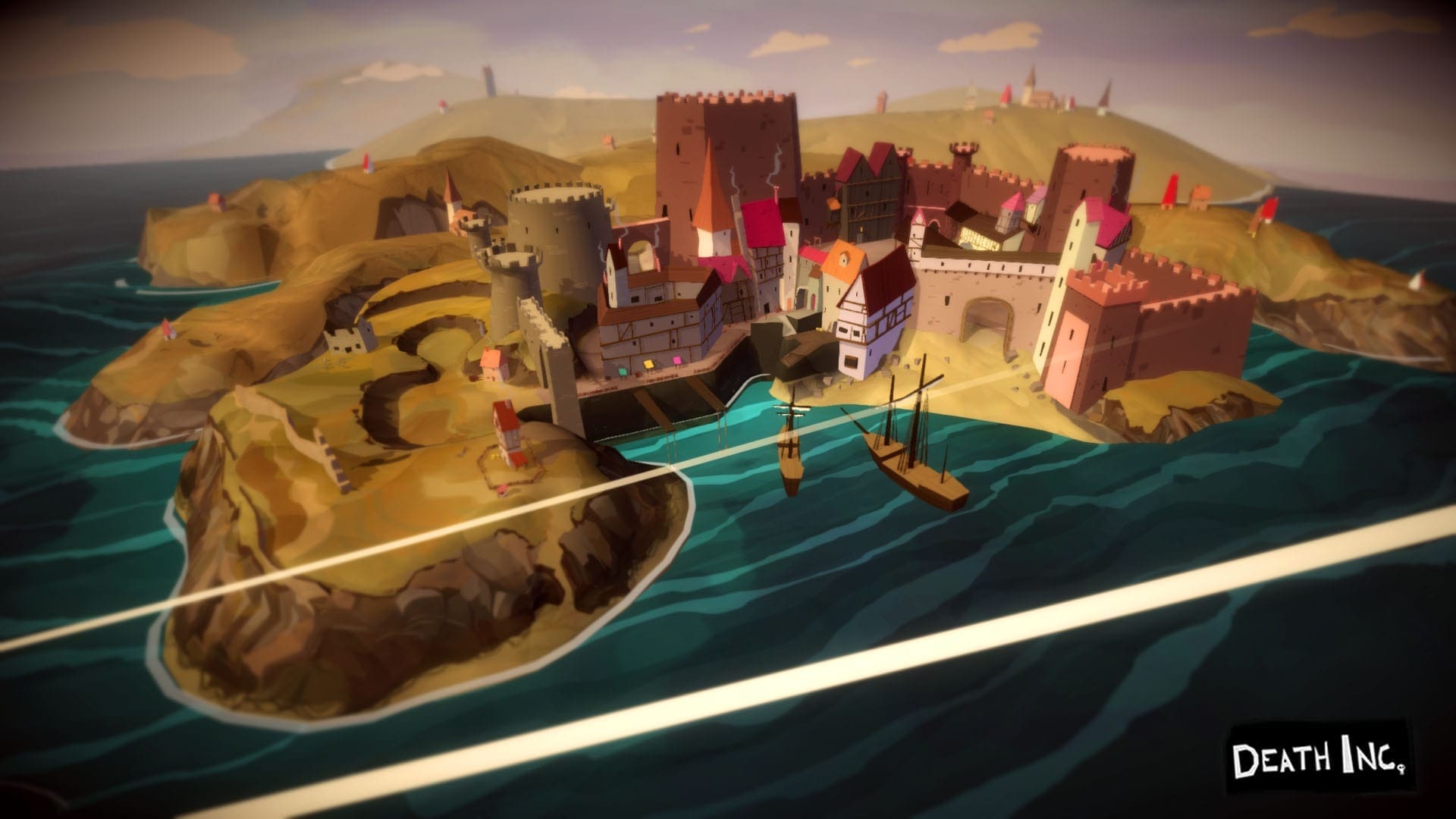 Well, that is a great question and I am glad that you asked! SUATOM! stands for “Shut Up and Take Our Money!” and is a semi-regular — it was never regular — article that I started on Constantly Calibrating last year. The idea behind it was to take predominantly Kickstarter campaigns and to hype them up. I have also done SUATOM! articles for assorted random things that I simply wanted to buy; I’m not picky or anything.

Starting today I’ll be doing the occasional SUATOM! for gaming-related things over here on Geek News Network. Find out how you can submit suggestions and ideas at the end of this article.

This is quite possibly an emergency SUATOM!, which means that the Kickstarter I bring you today has 5 or less days remaining and is not currently funded.

Death Inc. first came to my attention when Ted Timmins, lead designer of Fable Heroes, tweeted the above comment. Curious about what would lead a designer that I highly respect to make such a bold claim, I journeyed over to the game’s Kickstarter page. What I found was a thing of beauty, but how about we have the game’s creators, Ambient Studios explain the basis of the game:

In between Life and Death, there lies the Nether. And this is where Grim T. Livingstone, freelance Reaper, lives.

And so Death Inc. is born: A way to escape the rat race and establish the Nether’s premier mortality outsourcing agency, moving souls from Life to… somewhere better.

As Death Inc. grows, Grim discovers a terrifying threat: The villainous King Of England is in league with the Black Hearts, a secret society intent on discovering the secret of immortality.

And in doing so, they start to destroy Grim’s world. With not only the Nether but Life itself under attack, Grim has his work cut out and the Ministry Of Mortality either doesn’t know or care.

As is often the way, if you want something done right, you do it yourself.

Something almost nobody knows about me is that my role model growing up was the Grim Reaper.

Oh wait, you’re still here? Last person I told that to was creeped out for quite some time. (Years later she married me for some reason.)

Yes, the Grim Reaper for a time was my role model, simply because I admired that degree of power. The bitchin’ cloak and scythe certainly didn’t hurt the guy’s appeal either. So right off the bat I am highly interested in Death Inc., if for no other reason than the story intrigues me.

Oh, you want to know more about the basic gameplay? Well Ambient Studios answers that as well:

and unleash the bubonic plague upon 17th century England

Before starting this article I took the time to play the pre-alpha demo of Death Inc.; yes, you read that right, pre-alpha. For those who don’t know, games typically go through three major stages in development: Alpha, where the game is mostly barebones and bug-ridden as they’re fitting pieces into place; Beta, which is when development switches focus onto squashing bugs and less about adding content; and Gold, wherein the game is content complete and ready for shipping to retailers. As this demo is pre-alpha, it is buggy and only consisting of a single tiny level of the game.

Still, it is a fun little demo. The paint mechanic works like a charm and allows you to draw out a plague route in your efforts to take down a local lord. On “fantastic” settings the game’s art style stands out and is quite beautiful.

If you’re considering donating to Death Inc., I highly recommend downloading the demo.

In the end my purpose here is to let you know about this awesome game. I’m being selfish in this, because simply put, I would love to get the opportunity to step into the world of Grim T. Livingstone and to fulfil a twisted childhood fantasy. The developer has also stated that add-on content is in the works — which you can pre-purchase for a small additional fee on Kickstarter — that may allow Grim to visit other time periods.

If you would like to donate to creating a world with a game like Death Inc., then donate here. Not able to donate, but still want to show support? Well, then consider helping the game get green-lit on Steam.

Do you have another gaming related Kickstarter campaign that you would like to see featured on SUATOM!? How bout some awesome gaming product that has already been released? Well, you can see your or someone else’s project featured in another edition of SUATOM! by emailing me at Joshua.Silverman@GNNAZ.com.

Interview with JIMMY JAY of Jay Company Comics, Part I