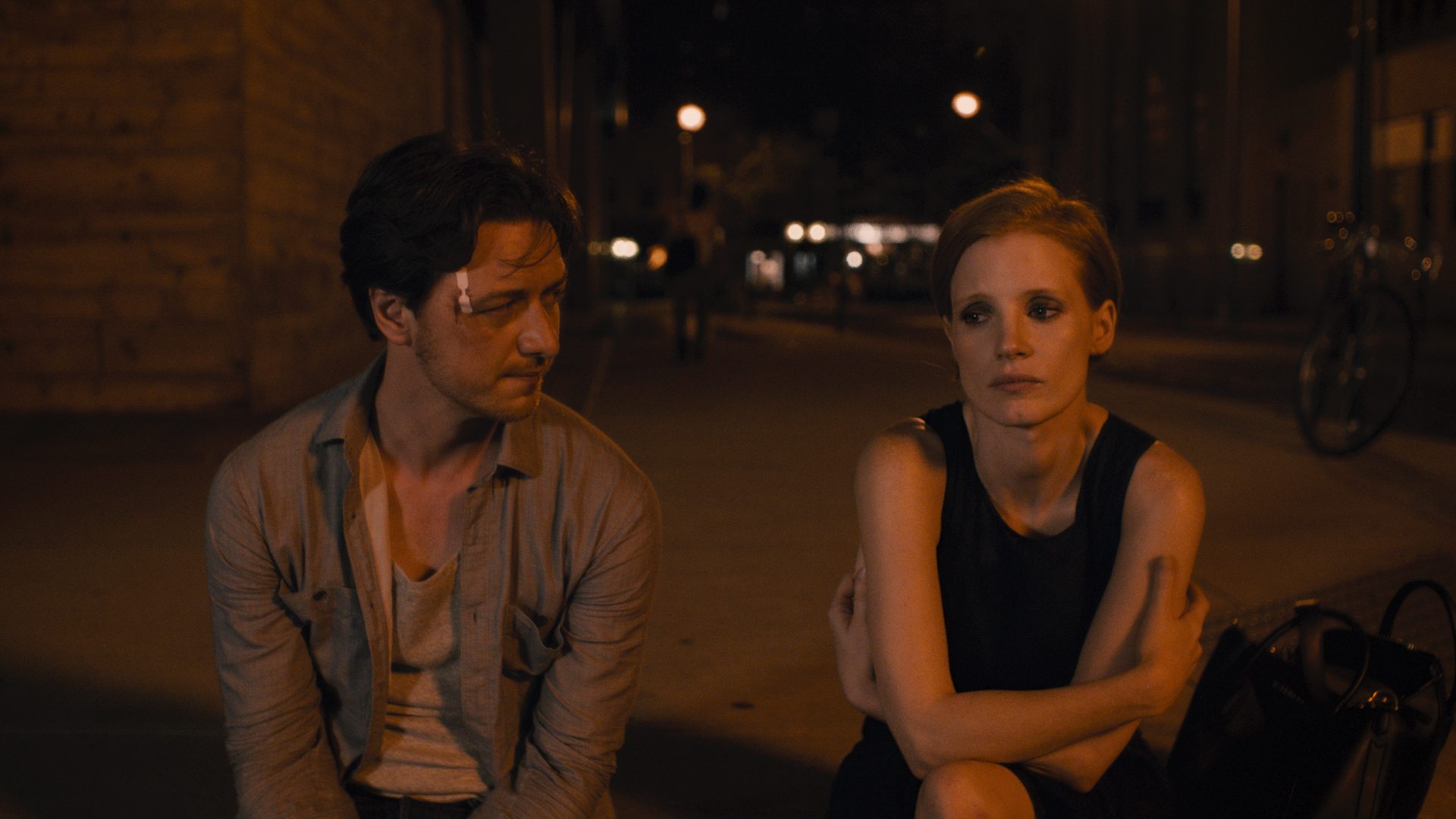 What’s up with how we as a species communicate? People nowadays assume they’re being direct with those around them or just don’t bother at all. Welcome to the world of Ned Benson’s Eleanor Rigby and Conor Ludlow the titular characters in The Disappearance of Eleanor Rigby: Them. Fresh off X-Men: Days of Future Past & the Help respectively, James McAvoy and Jessica Chastain took a chance on unproven director Nelson to examine what can simply be an artistic film project. But it is more than that. See, the auteur filmed the entire narrative first from Rigby’s point of view in rich oranges and lovely, warm hues before he reshot the entire film from Conor’s perspective of a grey, lifeless subdued New York City. Using a palette of subtle blues reminded me of McAvoy’s struggle with the uncertainty of the future and salvaging a relationship too little too late. Benson then edited both of those character studies (aptly titled The Disappearance of Eleanor Rigby: Her & The Disappearance of Eleanor Rigby: Him) into a seamless examination of a married couple coping in the void of a post-traumatic situation that redefines their entire identities as a couple and as individuals.

Does Eleanor disappear? Sure, she does. But perhaps we can argue Conor does so first. We enter the film after six months of identity crisis only to quickly flashback to better times. There’s this whimsical play between the two of them where they sneak out on a restaurant check that ends with them rolling around in Central Park before Conor tells her that he has “only one heart in this body. Have mercy on me.” She replies with, “shut up.” Awkward, unhealthy dialogue like this are so fatalistic that while the film is gorgeously shot, I just couldn’t help having no idea who to root for. Do I root for the women who escapes to her family home, cuts her hair, and starts taking “Identity Theory” courses at the local college, or do I root for the man who ignored his wife’s needs for months, opens a failing restaurant, and is frozen by the uncertain?

Don’t get me wrong. I enjoyed the film. I see so many of all of us in this film from Conor’s relationship with his best friend, Stuart, played by Bill Hader to Eleanor’s relationship with the talented Viola Davis who teaches her graduated theory class but in reality is the closest thing any of these characters has to a therapist in the film. I enjoyed Benson’s pacing in the narrative as he patiently reveals information about the character’s tragedy, although it reminds me of Hemingway’s short story “Hills Like White Elephants” in which a couple talks around all of their issues without addressing anything.

The cast here includes Conor’s morally ambiguous bartender and his simply, complex father played with perfect subtly by Ciaran Hinds. Jess Weixler plays Eleanor’s awkward younger sister who is as much her father’s daughter as Eleanor is her mother’s. The family patriarch is played well by William Hurt whose passivity lays like a cold cloud over the narrative while the matriarch, played very, very French by Isabelle Huppert, is never without a glass of wine and a je ne sais quoi attitude about pretty much everything. There are a few chuckles throughout the film, such as when Davis pokes fun of Eleanor’s name or Conor pulls a Han Solo when his wife admits to still loving him after everything. Sprinkle in a few symbols and metaphors about lightening bugs and Twizzlers, and you have yourself two hours of sugary popcorn performances.

If you’re looking for a romantic love story, skip this film. If you appreciate the verisimilitude of modern day relationships with a healthy dose of haphazard idealism, then be my guest. Let me know how you like it. For me, I’m curious to see if Her and Him separately will be the great films that Them tried to be. Your local film art house should be running both HER and HIM in late fall, but in the meantime catch THEM at Camelview 5 beginning on Sept 19, 2014.

The Disappearance of Eleanor Rigby: Them:[usr 4]

About The Disappearance of Eleanor Rigby: Them

Synopsis: After a tragedy strikes, Eleanor Rigby leaves husband Conor and returns to her parent’s home. Both grieve over their fractured relationship in their own ways with and without one another.