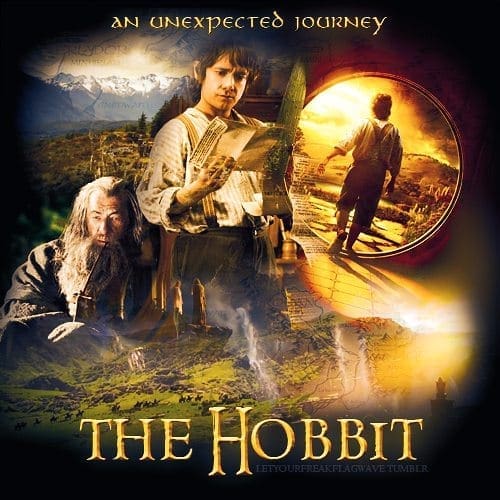 “All right, look, there’s only one ‘Return,’ okay, and it ain’t ‘of the King,’ it’s ‘of the Jedi.’” I love Star Wars and I love Lord of the Rings, but let’s face it, Return of the King is a far better movie. I don’t remember crying during Return of the Jedi. And actually I wasn’t crying, it was a friend of mine…but I digress. You always hear people say “Lord of the Rings was only supposed to be one book blah blah blah,” and I consider the movies to be one and not because I’m some Lord of the Rings elitist, but because you have to watch all three or none at all. I can pop in The Dark Knight without worrying about Begins or Rises, I can’t do that with Lord of the Rings. When it comes to book and movie comparisons I hated the Lord of the Rings books, but I consider the movie(s) one of my favorites and some of the best ever. As for The Hobbit, I loved the book. I fully expected to hate the movie going into it and therefore had very low expectations. Perhaps I was setting myself up for disaster by feeling that way, but even those low expectations weren’t met.

I was excited when Guillermo Del Toro had signed up to direct, but I was even more delighted when Jackson returned to the director’s chair because The Hobbit and The Lord of the Rings are so intertwined that I thought the vision needed to remain the same. That being said, The Hobbit is too short to fill three movies. I was willing to buy the two movie split if each was about two hours long, but this first installment clocks in at 170 minutes, that’s two hours and fifty minutes for all you non-math people out there. That is far too long for the amount of information that is shown here. Giving the ending of the book the third movie should be pretty action packed though, I could imagine a battle that rivals the one at Minas Tirith. And why can’t these characters quest for stuff that is closer to home? There is a lot of walking in this movie. A lot. Even when they stop for an action scene they are still running toward something. I’m surprised there isn’t a Nike endorsement for this movie. And throughout the movie Thorin is a dick, like needlessly so. It’s like, they’re trekking across the world for you, you could be a little nicer.

Peter Jackson dug into the appendices and the history of Middle-Earth to give The Hobbit a larger scope. Some of it works and some of it doesn’t. There’s a scene when the group is traveling through the mountains before they encounter the goblins and Bilbo finds the ring where there’s a thunder storm going on, only it’s not a thunder storm, the mountains are fighting! That exclamation point was meant sarcastically. This is very cool, but had absolutely nothing to do with anything. Who are these mountain giants? Don’t know. Why are they fighting? Shrug. Jackson caught a lot of flak for cutting out Tom Bombadil from Fellowship, which I thought was a smart move, and there was a similar opportunity here to cut out Radagast the Brown, but he leaves this weirdo in. We’re talking about a guy who walks around with bird poop on his head in every scene he’s in. I did enjoy that addition of the Pale Orc who has a similar relationship to Thorin as Isildur had to Sauron, only he lives and has a vendetta against Thorin. The goblins they meet under the mountain are the least scary creatures I’ve ever seen. The fat king has a fat normal voice and it seemed like a fat guy stumbled upon them one day was like “I’m your king.” There were also more than a few modern references such as drugs and the game of golf that made me say “really?”

There are boatloads of characters in The Lord of the Rings and the only way it functions is shifting the narrative back and forth between the cogs of the story. There are no such narrative breaks in An Unexpected Journey and it becomes tiresome watching fourteen people walk and walk. It felt like a tourist video for New Zealand.

All of this isn’t to say that there aren’t some parts I enjoyed. Like I mentioned before the Pale Orc is one of my favorite characters. His band of troops ride around on Wargs that are much leaner and meaner looking. This time around most of the orcs have had their faces digitally created so they look more tortured and evil. The most annoying aspect of the original trilogy becomes one of the most pleasant moments in this movie, and that is the character of Gollum. They took the technology from the first time around and improved on it. He looks as close to lifelike as you can get and Andy Serkis’ performance was a joy to watch. I also enjoyed the fact that there is no signing in the movie.

Now to the thing you’ve all been wondering about, the 48 frames per second. I applaud Jackson for being innovative in that respect. The high frame rate makes everything look fantastic and very realistic. Some people had mentioned being able to notice all the mistakes and set pieces, but I was never able to notice anything like that. The problem with being ultra-realistic is that there is no sense of escapism. The high frame rate would be extremely useful for movies like Zero Dark Thirty or United 93, movies that need and want to put you into that world, but it doesn’t work for a fantasy film like The Hobbit: An Unexpected Journey. I hate 3-D, as you may know, and (usually) will not willingly watch a movie in the format, but the high frame rate makes it bearable. As for the 3-D in The Hobbit the quality of it shifts back and forth from immersive to looking like a crappy diorama.

The Hobbit was never going to reach the emotional depth of The Lord of the Rings and I never expected it to. Jackson had something to prove the first time around. There is nothing to prove this time around and it felt laborious to watch and was obviously far too long.