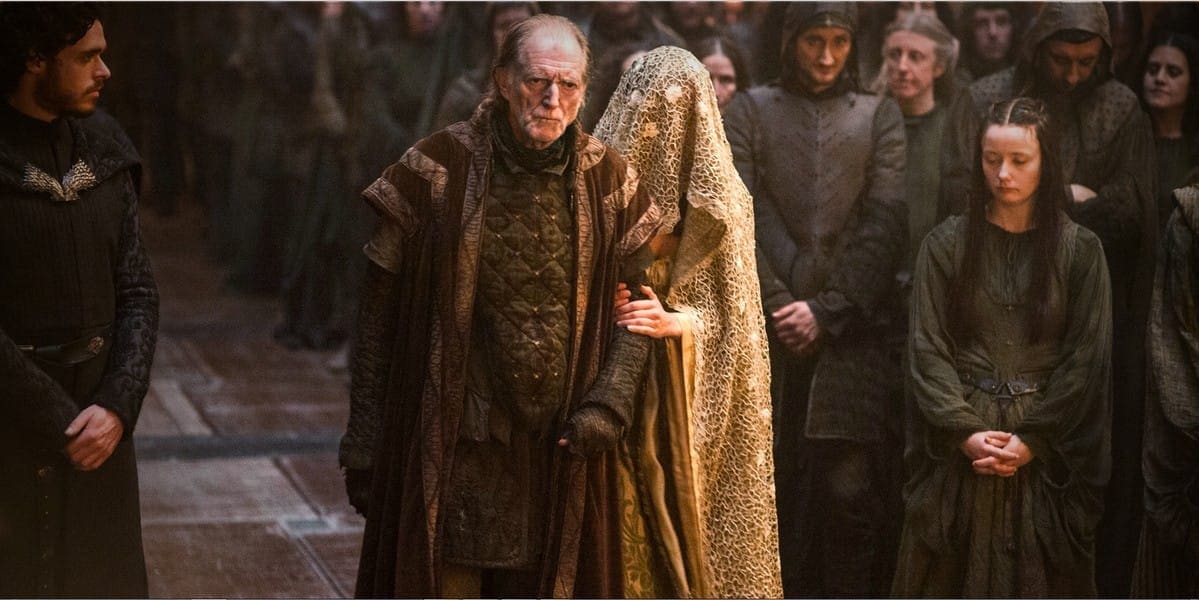 This is it. This is the one we’ve all been waiting for. Book readers knew what was coming from the episode title alone, and non-readers would be just as shocked as we were when we first read the chapter. Even though I knew what was going to happen, the cast and crew of the show did what I thought was impossible. I was shocked and appalled at what I was seeing, and I loved every minute of it. The happenings outside of the Red Wedding itself were also great, and we will start with those few.

Seeking shelter from a storm, Bran and company hold up in an abandoned tower, when they hear some commotions outside. Fearing they will be detected by a freaking out Hodor (thunder scares the big fella), Bran is able to Warg into him and make him sleep. He also jumps into Summer to fight off the Wildlings and sees Jon Snow in the process. Jon’s being there was to execute a horse trader before he can get to Castle Black. In his hesitation, Orell accuses him of still being a crow, and a fight bursts. After the Direwolves dispatch a few Wildlings, Jon jumps on a horse and heads back to the Watch, leaving Torrmund and Ygritte behind. Bran sends Rickon off with Osha for his safety as he continues his search for the three-eyed raven.

Daenarys waits while Jorah, Grey Worm, and Darrio break in the back gates to take over the slave city. It will be interesting to see the outcome of Dany not seeming to care that Jorah was still alive, but was swooning over Darrio when he finally appeared. Arya and the Hound make their way to the Twins for the wedding, just in time to see…

…So we all knew that Walder Frey was not a good person; hardly a person at all it could be said. What we didn’t know was that he is pretty much the worst person in the world. After giving King Robb bread and salt (symbols for safety and protection), the wedding occurs rather uneventful. After the bedding ceremony, the doors of the hall are closed, and everything turns much, much worse. As the band plays the music, it turns into a rather dire version of Rains of Castamere, and Catlyn notices something amiss. Lord Bolton is wearing armor! As she slaps him and calls out for Robb, he bolt(on)s out of the room, turning Robb’s attention to the man who jumps out of the shadows and repeatedly stabs Talisa in the belly, killing her and their unborn child. It is at that point the crossbow bolts start flying and everyone, that’s right everyone, is hit.

As this is happening, the Hound arrives to the gates with pigs for the feast (incognito), and Arya in the back as his “daughter”, as he was planning on returning Arya to her family for a reward. Arya suspects something is very wrong, as the guards hastily tell them to turn their cart around. She escapes from the Hound in time to see Stark soldiers being killed. She then witnesses Grey Wind being killed by more crossbowman than it should have actually have taken, as he was locked up in a kennel. *Begin crying*

Cruelty abounds in the Twins on this night! We go back into the keep to see Cat take Lord Frey’s wife hostage and threaten to kill her if Robb is not set free. Frey is indifferent though, and that is when Lord Bolton returns to Robb with a message. Stabbing the King in the North in the heart, while whispering “The Lannisters send their regards”, Cat lets out a scream of insanity and sadness, and with one final act of defiance slits the throat of Lord Frey’s wife. Staring into the space occupied by the bodies of her son and his men, her throat is cut, and as she falls the screen goes black. *Continue crying, begin screaming/throwing things at the TV, or just blankly staring at the screen with the thought of “wtf just happened?”* I think the strongest part of this episode had to be the fact that there was no music over the end credits. You are given nothing but silence and the images of the last 10 minutes going through your mind. The ninth episode of every season so far has been the best ones of all, and the Rains of Castamere is no different. It may be the best of the series. What might happen next in next week’s season finale?  Could it possibly get any worse than that?