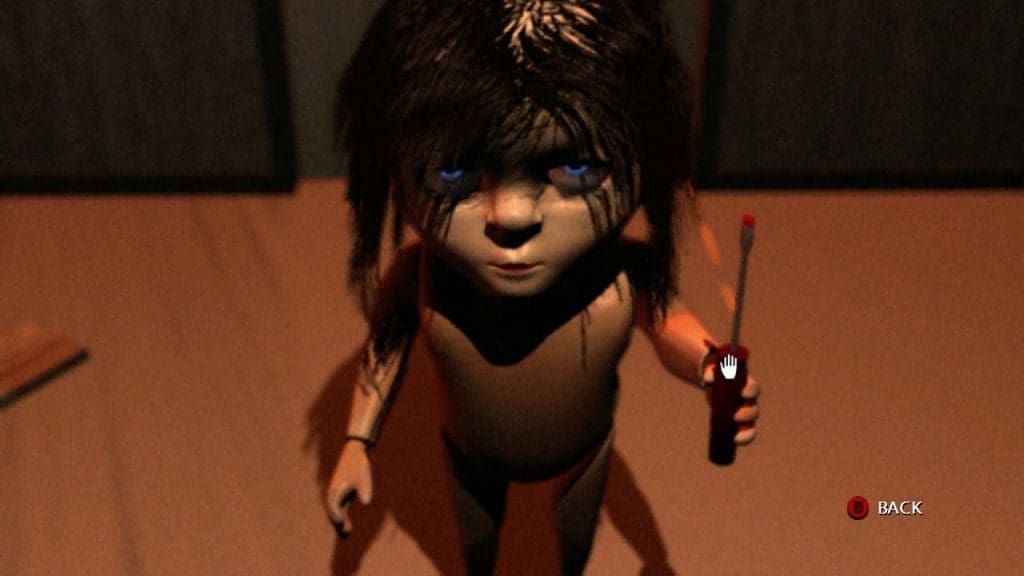 When it comes to horror games, there are a few titles we have all heard of. Resident Evil, Silent Hill, Fatal Frame, and Dead Space, have revolutionized the genre, and have changed over the years. But, for horror game junkies, a few titles have flown under the radar, and have been a terrifying ride. But these are all rather well-known. When coming up in conversation, most people will often bring up Resident Evil or Silent Hill as popular horror games.

This is a list of the Top 10 obscure horror games in video games in no particular order. Of course, this is simply my opinion, so if you disagree, please comment on a game you feel should be on the list!

A 1995 SNES game, that continues to terrify to this day. Clocktower was a point and click horror game, where you played an orphan girl named Jennifer Simpson who has recently been adopted by the wealthy Barrows family. Along with her friends, who had also been adopted by the Barrows. Things seem to start well, but, when Jennifer discovers one of her friends killed, and a deformed child wielding a pair of huge scissors, things start to go down hill. The aptly named Scissor Killer stalks you throughout the entire game, and find out the secrets of the Barrows family. The SNES game revolutionized survival horror with its use of puzzles, insanity meters, and the including of 5 different endings the player can get. If you’re in the mood for some nostalgic fear, check out Clocktower. It does have two sequels, but, neither can really live up to the terror the first one evoked in our hearts.

A 2005 PS2 game that was actually a spin-off of the Clocktower. Based of a system called Stalking and Panic, Haunting Ground puts you in the shoes of Fiona Bell, a young woman who was in a car accident and wakes up in a strange castle. There, she meets the rather strange castle keeper Ricardo, and his equally strange maid Daniella. Oh, and how can I forget, you do get an adorable canine companion named Hewie, who, will be a vital part of surviving the game. The game follows a similar system as Clocktower. It uses a Stalker and Panic method. Playing as Fiona, you have no weapons, you literally have to just run and hide. But, when Fiona get’s too scared, her panic meter will fill up, and she will run out of whatever spot she is hiding in. It’s a technology we haven’t seen in games for a while, and I feel it is missed. It made the game that more terrifying. It’s great for multiple play-troughs‘, having more than 4 endings to Fiona’s story.

Haunting Ground is a very haunting title. Come for the pure survival horror game play, stay for Daniella’s manic laugh that should be everyone’s ringtone. (seriously, you tube it!)

Maybe I just have a thing for point and click games. One would not think they would be so terrifying, but yet, here they are, still as terrifying as the day they came out. Take for instance the 1992 game Dark Seed. Dark Seed follows Mike Dawson, who, was based on one of the developers of the actual game. Dawson is a successful ad-agency executive who moves into an old manor. Once he moves in, Mike begins starts having horrible headaches for no reason. After investigating the manor a bit more, he discovers a portal to something called the “Dark World”. The Dark World is all inspired by the artwork of H.R. Giger, who makes some pretty disturbing artwork in general. It’s fun to play through, trying to find out the mystery of this other world, and the horrors that lay in it.

Though, a fair warning friends, while the first Dark Seed is pretty awesome, the second is the exact opposite. Mike Dawson obviously made someone mad and the game is just…hilariously awful. If someone does manage to give this game to you, throw it in the street, run it over with a car, set it on fire, and never speak to that person again. However, if you are interested, I suggest looking at some lets plays.

A seemingly innocent indie game that was on the 360 for 800 points (back when they still did points) per episode. A modern-day point and click horror game, that reminds me of some of the previous ones on my list. The game starts with you waking up in some strange environment, there are notes everywhere of, what seems like, someone missing, a little girl and her mother. There are clues that a serial killer around, and he may have something to do with the disappearance of these two. To say anymore would ruin the insanity the plot holds, but, I will say one thing. Creepy. As. Hell. Dolls. So yeah…if you’re like me and terrified of dolls, this game will have you going into a Toys R Us and weeping when you are pulled into the baby doll aisle.

Condemned is one of those games that’s horror truly in lies in its creepy and disturbing environment. The constant gloomy and unnerving grays that are used as you make your way down a sewer system. It follows a cop named Thomas who is accused of killing his partner. He is on the hunt for a killer, the one who actually committed the crime. At the same time, birds are falling out of the sky for no reason, seeming to have some kind of brain hemorrhaging. What makes it even more terrifying is the lack of ammo you get. You are better off going mêlée on the mutant freaks that roam the sewers. Health is sparse, and the enemies are smart and powerful. The story is interesting, and though you may be scared, you’ll want to continue to find out the mystery involving Thomas.

One last thought, mannequins, there are mannequins in this game…they…are nightmare fuel. You will have nervous breakdowns when you go into a department store, and the 1987 film Mannequin will be even more terrifying than it already was.

Rule of Rose is a rather strange and obscure title by developer Atlus. It’s mostly obscure because it almost didn’t come to the US. With themes of same-sex relations, pedophilia, and violence against children, a lot of US developers didn’t want to publish it outside of Japan. But, personally I am glad they did. It had a great story. The story follows 19-year-old Jennifer, who is trying to recount her lost childhood memories and time at the Rose Garden Orphanage after her parents died. There we learn of the story of the orphanage. The children there have developed a kind of hierarchy to rule with. A society called the Red Crayon Aristocrat Club, headed by the Rose Princess. Like any hierarchy, Jennifer starts at the bottom and must climb her way up. While doing this, we learn more about the orphans, about Jennifer, and the orphanage itself. What is really interesting is, since Jennifer has no recollection of her memories, we don’t know if this is the truth we are seeing. Its one perspective you have to go off of, because, you have no other options. Though it’s not traditionally scary, the orphanage itself and the things that Jennifer goes through are terrifying in their own way.

Part hilarious, part disturbing, and part just plain weird, the 1994 point and click life action game Harvester is an experience all in itself. The game is known for some rather brutal death scenes. You play as Steve, our main character who wakes up in the strange town of Harvest. He has a family who he has never met, a fiancée he is engaged too who he doesn’t know about, and everyone wants him to join the lodge. As you go around town, you meet some very peculiar characters, and see some rather strange and disturbing thing. Again, I can’t say too much because it could ruin some parts of the game for you. Harvester may be one of those games that is just so odd in itself it is a cult classic. It’s actually currently available on Steam, so, if you want to see what I’m getting at, try it out.

Siren is one of those games that you almost have to take a step back and think about when you finally complete it. It is a truly horrifying game, and was almost banned in the United States for some of its content. The plot follows a Japanese town called Haunda, who is rather cut off from the rest of the world and follows extreme religious beliefs. The residents mostly keep to themselves, but, when a ritual happens in the town, strange things begin to happen. The town itself is on the edge of time and space, and red water replaces the mountain territories. You play as several different villagers, all trying to fight off an army of shibito (corpse people). The game has an amazing gameplay that allows the play to ‘sight jack’ and see hear what another human or shibito is saying. It is notorious for being a rather difficult game, but its worth the struggles to go through the amazing plot.

If there ever was a video game equivalent to the David Lynch masterpiece Twin Peaks, this would be it. Deadly Premonition plays out like a horror comedy game, giving you scares and then a moment later, making you laugh. Not only that, but, it revolutionized the idea of an open world and nonlinear story in survival horror. You play as FBI Special Agent Francis York Morgan, who, has been called in to catch a serial killer by the name of the “Raincoat Killer” It all takes place in a small country town called Greenvale. Trying to collect clues and interview townsfolk is interesting to say the least. Some real weirdos seem to inhabit Greenvale, and it all helps shape the surreal feeling of the game. Though originally for the 360, the game was re-mastered for the PS3 in a directors cut. If you have the chance, try taking a trip to Greenvale, you will not be disappointed. Oh boy, talk about a gaming masterpiece right here. Called the rightful predecessor to the Bioshock series, System Shock 2 is a survival horror game that’s sales never made it into a blockbuster like Resident Evil or Silent Hill. Taking place in 2114 after an incident 42 years earlier. The player must travel to the Citadel Station, a space station that was a part of a huge cover up after an AI went rogue. After being on the end of an alien infection, a soldier awakes from cryo-sleeps finds himself in the middle of a mess. To say more would ruin one of the best stories in video game history. All I can say is play this game, and reveal in one of gaming’s best villains of all time. Don’t believe me? It’s available on Steam. With its creepy atmosphere, changing alliances, and heavy driven plot, it’s a shame the game didn’t get the commercial success it deserved.

Out of the Badger Hole with Shelter – Game Review

Not For The Casual | XCOM 2 Review