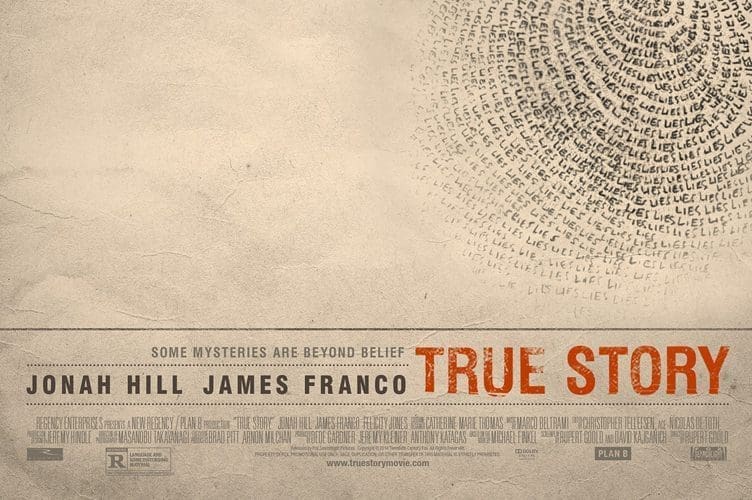 Even though Jonah Hill is one of the most recognizable actors working today, he only began his career a little over ten years ago. He played small, bit parts on several different TV shows and films but it was the 2006 college comedy  Accepted that made him a household name. From there he has gained more and more notoriety with the films Knocked Up and Superbad. He since has transitioned himself from being only a comedic actor to taking on more dramatic roles. In 2011 and 2013 he was nominated for an Oscar in the Actor in a Supporting Role category and now he is trying his luck again with his performance in the new film True Story.

Based on the book of the same name, Michael Finkel (Jonah Hill) is a well-respected new York Times writer who has covered many noteworthy stories over his career. One day one of his stories is turns out to be filled with many inaccuracies and he is subsequently fired. While looking for another job, he gets a call that an accused murderer named Christian Longo (James Franco) has been captured and has been using Finkel’s identity while on the run. Finkel contacts Longo and the two men come to an agreement to divulge the truth behind the murders in a series of interviews. From then on, a game of lies and deceit commences and Finkel has to figure out who Christian Longo truly is.

While my initial impression of the film was that it was incredible, after taking some time to look back on it, I would say that it’s actually very average. The highlight that must be discussed is the overall story. From the very beginning up until the last ten minutes or so, I had no idea where things were going to end up. The story manages to relentlessly throw curveballs at you in the aspect of whether or not Longo is actually guilty. Couple that with Finkel’s exasperating search for the truth and you become instantly invested in the story as a whole. While there are many times that Franco’s performance falls in the realm of almost laughable, the last act of the film is actually some of his best work so far. He perfectly resonates with the audience as a broken man with many well-kept secrets. In addition, he shows a different side of his personality that I have never seen previously and for several minutes I actually got lost in his character. Hill on the other hand plays his role somewhat flat and static throughout. His performance isn’t bad in the least bit but it’s at a point where you don’t know if you should actually be rooting for him or not. It is simply very middling in general and his constant harsh glares become almost annoying after a while.

The most atrocious element of the film would have to be the camera work. The majority of shots are very static, uninteresting, and out of focus. It feels as if they had to rush through pre-production with an incredibly small amount of prep work for their shot list. However, even with all of its flaws, The twists and turns throughout the film are reason enough to recommend it. So if you’re looking for a crime drama that will definitely surprise you, True Story is a film you should check out.

Synopsis: A former New York Times writer attempts to figure out the truth behind an accused murderer who was using his identity.