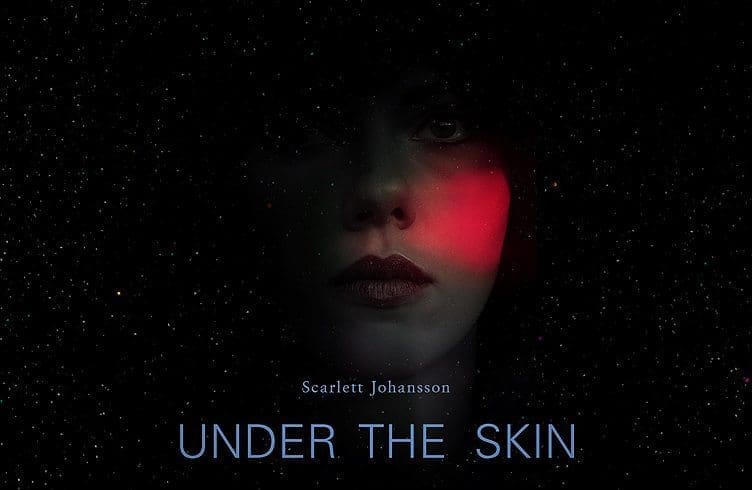 Although Scarlett Johansson has been appearing in major films since 1994, she really hasn’t been in the spotlight until the last couple of years. The first role that I remember her in would be playing the dorky older sister in the third Home Alone film. While that may be my first experience watching her onscreen, for many it would have to be the 2003 film Lost in Translation. Since then she has leaned more towards dramatic roles with the exception of joining the Marvel Universe by playing the role of Black Widow as of late. Transitioning back into showing off her acting ability, Johansson stars in the new Jonathan Glazer sci-fi /drama entitled Under the Skin.

The film takes place in Scotland where a female alien is on a mission to pick up unsuspecting men and take them back to some type of other worldly all-black room. From there she disposes of them in a type of oil-like, black goo while an unknown motorcycle-riding man gets rid of any evidence that the men ever existed. After picking up one of the men, she decides to abort said mission in an attempt to see what life is really like on this alien planet.

Poorly edited, horribly shot, and packed full of outrageous metaphors is the best way to describe this film. Director Jonathan Glazer attempts to show a new perspective on the way men and women interact within our society while trying duplicate Stanley Kubrick’s innate style in the process. The film feels very aimless with scenes taking place with absolutely no context or set-up. Characters lack any type of back-story or even a name and rarely speak which further isolates the viewer from the overall story that Glazer struggles to tell. Many scenes overstay their welcome with takes that don’t cut until long after the actors have left the screen. Nearly half of the film is Johansson merely sitting in a van attempting to pick up men walking down the road. While that may be the crux of the story being told, after a while, the act becomes more and more monotonous to the point of being unbearable to watch.  Lastly, almost everything that appears within the frame feels very disconnected and devoid of any artistic value to the point of living in the realm of amateurish. Despite all the negative comments that I just listed, the film does have a couple of almost redeeming elements. Johansson is fantastic at playing a character that is unfamiliar with the world she now inhabits. From her long glances at mundane sights to her aimless wondering and poignant attempts to fit in, she demonstrates an almost childlike wonder that is completely believable. Also, the use of visual effects such as the black goo that I previously described, are an outstanding attempt at showing off a world that is completely foreign to us.  Nevertheless, this is an “artsy” film through and through and one whose meaning is obscured by a disgraceful amount similes and metaphors. I’d only recommend Under the Skin to those who enjoy tedious, ambiguous films where little to no narrative information is given to the audience.

Synopsis: A female alien in Scotland is tasked to prey upon unsuspecting men.