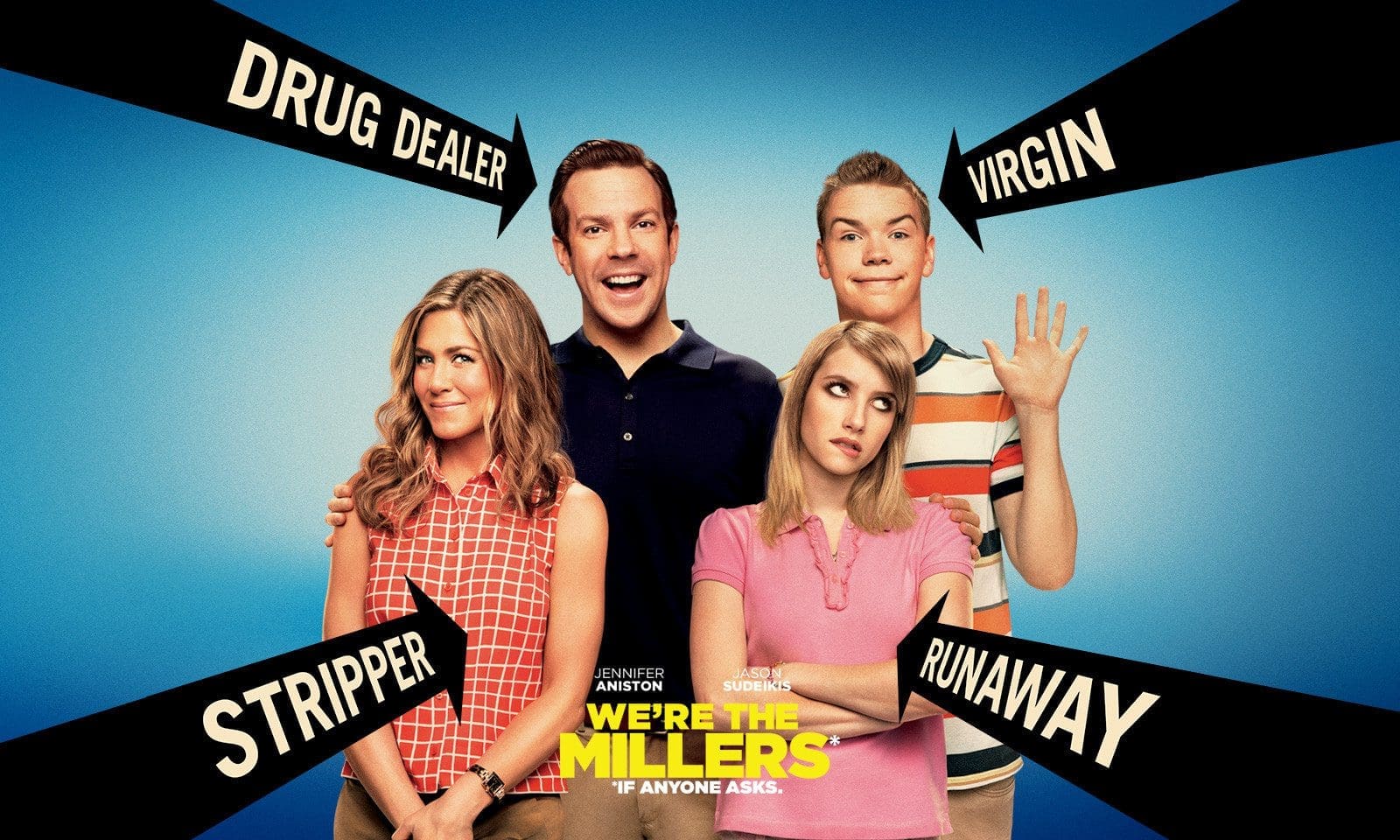 Recent comedies seem to come and go nowadays. They get a fair amount of publicity but after the trailer hits and then the film finally rolls out, they all seem to quietly vanish into the back-catalog of a studio’s film history, never to be spoken about again. Perhaps this is a sign that the comedy genre has lost its edge as well as its lasting power. Perhaps studios just roll them out like an assembly line without as a much of a hint of eternal love and admiration for them; perhaps, perhaps, perhaps. So as 2013 continues to tread on we get another comedy that wants to make its mark this summer. We’re the Millers is the new ensemble-laden film directed by Rawson Marshall Thurber of Dodgeball fame.

The film’s plot is a somewhat overused trope that has been seen in countless other films thus far. Jason Sudeikis plays David, a small-time pot dealer that gets robbed. He owes his main supplier quite a bit of money and due to that and his now lack of cash, his supplier asks him to go and get a shipment of marijuana from Mexico in order to pay off the debt. David agrees and comes up with a plan to recruit some of the loner people he knows from around town to create a fake family in order to make it less obvious that he is smuggling drugs.

With trailers for comedies these days tending to give away all of the funny parts from the film, I didn’t have high hopes for We’re the Millers. Luckily my expectations were completely and utterly wrong. The film is ridiculously funny with jokes hitting quite often. The beginning starts off somewhat dry with setting up the characters being the main reason for the lack of laughs. However, as soon as the fake family hits the road in their over-sized motor home, the comedy begins to soar exponentially. Even though Sudeikis gives a great performance as always, it’s Jennifer Aniston playing a stripper and Will Poulter playing a geeky virgin that truly set the screen on fire. Aniston is known for her more timid comedic roles but after Horrible Bosses it seems that we are seeing another side of her; a side that makes her even more appealing and outrageous. Poulter who is an England native and most known for his role in the 2007 film Son of Rambow is able to show off his acting chops as a believable virgin. He is the character that you have to laugh at due to his extreme use of awkward situations.

Even though the main cast is filled with A-list celebrities, so is its supporting cast. Nick Offerman and Kathryn Hahn are another family travelling through Mexico that happen to cross paths with the Millers. They have a daughter in the film that is mainly forgettable but both of them tend to steal the show whenever they’re onscreen. Offerman plays a very straight-laced, no-nonsense guy that has a secret fetish that once revealed, is hilarious to watch. Hahn plays a very loving and giving mother that wants to help out the Millers any chance that she can. At first they seem like the standard cardboard cutout characters seen in other films, but it’s their little quirks that help set them apart in the long run.

What could set We’re the Millers apart from the cascading onslaught of comedies this year would be a great story. Unfortunately for the most part, it’s one that we have all seen time and time again. Even the ending is one that you can predict from a mile away. Nevertheless, a comedy first and foremost has to be funny and that is what this film is. So on that note, when compared to all of the other comedies that have come out thus far, We’re the Millers is a family that I think you should meet.

Synopsis: A small-time drug dealer must create a fake family to smuggle drugs out of Mexico in order to pay off his debt.