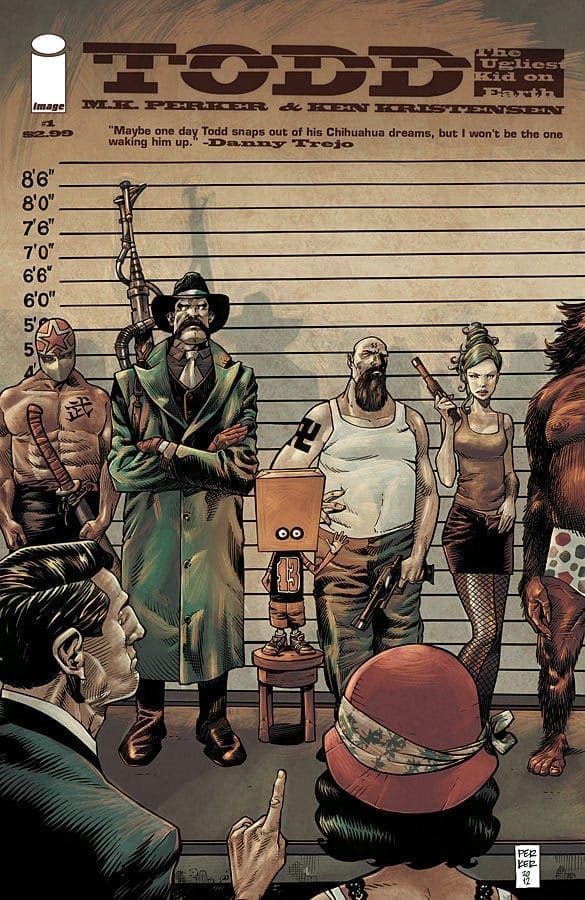 Some comic books might be great jumping on points, others are one and done stories, or some are just worth the price of admission.

‘DEATH OF THE FAMILY’ continues here!

Has The Joker broken Damian? Has Batman’s son met his fate at the hands of The Clown Prince of Crime?

Black Beetle’s investigation of two local mob bosses is interrupted when a mysterious explosion murders them and a pub full of gangsters-taking out most of Colt City’s organized crime in one fell swoop. Who could pull off such a coup, and what danger might that murderous bomber do to Colt City and Black Beetle?

Jediah Caul, a disgraced Green Lantern stripped of his power ring, is hunted for sport on a televised reality show!

With nothing but his training as a GL and whatever weapons he can scavenge, can Caul not only survive these games but win back his self-respect?

Plus, in the backup story: What happens when Larfleeze, the ultimate hoarder, is robbed…of everything!

The Illuminati gather to plan for the death of Everything. Infinity gems, old wounds, lies, agendas and universal incursions.

‘It breaks hope — it crushes what makes us decent and steals what little honor remains.’ –Black Swan

What and where is ÖBANNERTOWN, U.S.A?

‘DEATH OF THE FAMILY’ continues here!

In this issue you are invited to the wedding of Barbara Gordon and The Joker!

The entire Gordon family is on hand for the most terrifying nuptials of all time!

A PERFECT JUMPING-ON POINT FOR FANS NEW AND OLD! PART ONE OF A NEW STORY.

Carol finally returns home, but is changed. What is weakening Captain Marvel’s powers?

PLUS: Carol gets a JOB.

Find out why CAPTAIN MARVEL is being hailed as one of Marvel’s best new series this year!

Daredevil teams up with the ALL NEW Superior Spider-Man!

Yes, America, we’ve heard your calls! Stilt-Man Is BACK! Better than ever thanks to some last-minute help from Doctor Octopus.

The Eisner and Harvey Award winner for book of the year continues to baffle all of us here at the House of Ideas! ‘DEATH OF THE FAMILY’ continues!

Batman heads into his showdown with The Joker as the madman’s plan is finally revealed – in Arkham Asylum!

It all lead’s into next month’s terrifying conclusion!

And in the backup story, in the midst of The Joker’s assault on Batman and his allies, get a secret glimpse into what started The Crown Prince of Crime on his horrifying journey! The Will finally has a good day. This series, a collision of comedy, sex, and violence, follows the misadventures of America’s most dysfunctional family as they go head-to-severed head with an Oprah-loving ax murderer, a cult-crazy soap opera star, and a neo-Nazi prison gang. First issue: Todd wants desperately to make friends, but every kid he approaches winds up decapitated. Or worse. Meanwhile, Todd’s mother is on a mission to get even with her husband who she believes is having an affair.

* This article was compiled while listening to the album L’Enfant Sauvage by the band Gojira.
[SlideDeck2 id=9304]

Midnight Mayhem is back for one more performance!

‘The Last of Us’ Demo Now Available to Download; 14-Minutes of...