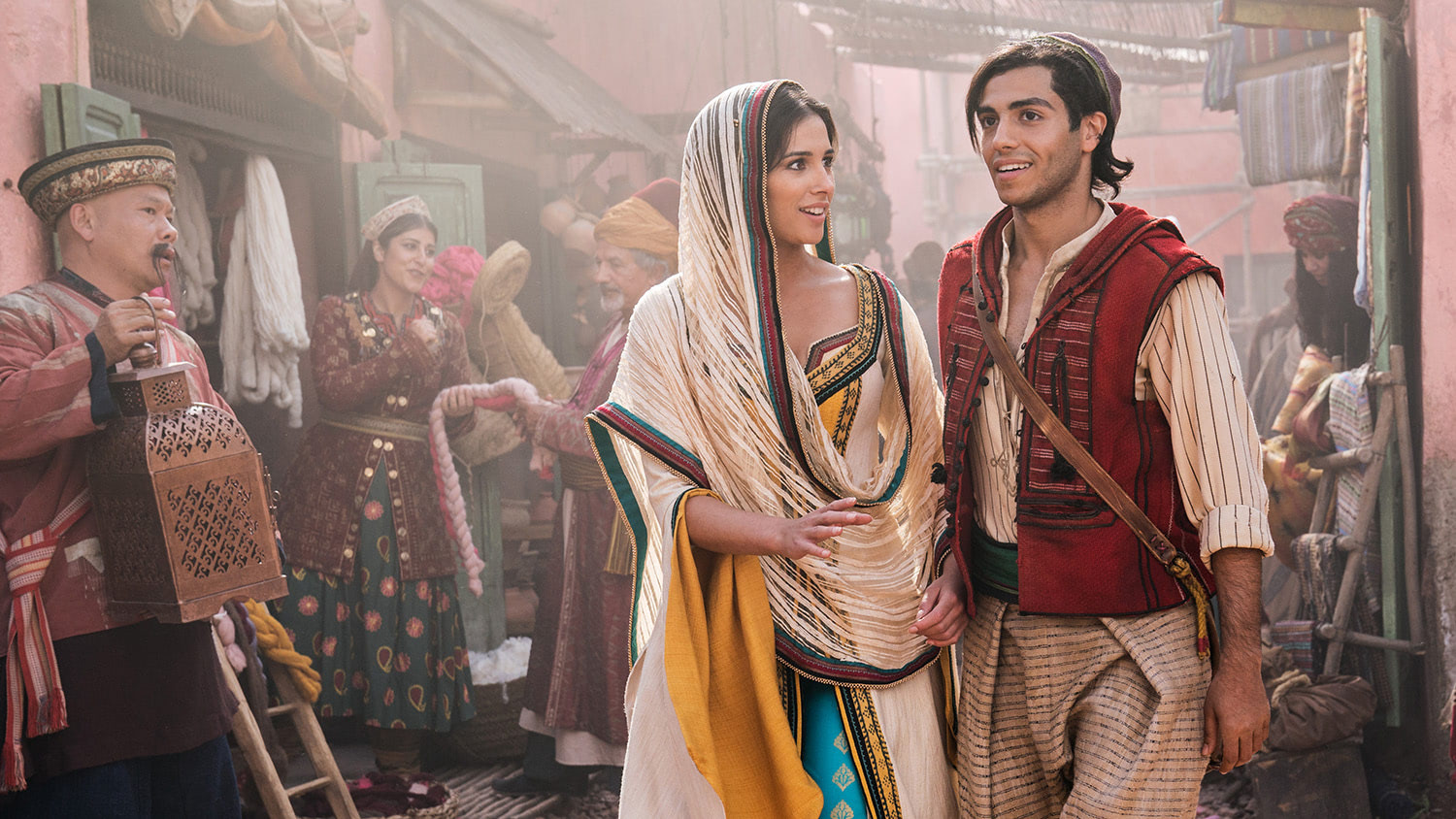 Since I can remember, the 1992 Disney version of Aladdin has always been my favorite animated feature film.  As a kid I fell in love with the intriguing story, the over-the-top characters, and the incredibly memorable songs. I enjoyed everything about it so much that I saw both of the direct-to-video sequels as well as watched the animated television show whenever it aired. To say that I’m a fan would be a bit of an understatement. So two years ago, when Disney announced that they were making a live-action version, I was a bit cautiously optimistic. However, learning that director Guy Ritchie was in charge of adapting this new version of Aladdin slightly comforted my fears.

Aladdin is the story of the titular character (played by Mena Massoud), who is a young “street rat” that pilfers from local merchants in the Arabian city of Agrabah. One day he comes across a young woman who has unfortunately gotten herself into a scuffle regarding paying for food. Trying to help her out, Aladdin whisks her away from the situation with his fancy moves and ends up falling for her. While attempting to win her affection within the surrounding palace, Aladdin is captured by a man named Jafar (Marwan Kenzari) and taken to a mysterious cave in the desert. Jafar sends Aladdin into the cave to retrieve a mystifying lamp. While attempting the feat, he encounters a magical Genie (Will Smith) who aides him in his mission to win the heart of the mystery woman.

Borrowing greatly from the 1992 film, this interpretation follows the majority of the same beats while adding a few welcome additions along the way. With that being said, even though I pretty much knew the entirety of the story, it was still a fun ride from start to finish. Aladdin is a great tale and I feel that if they diverted from the path too much then it could have ended up like Maleficent – a far departure from the source material and devoid of any real semblance of the original character.

While early speculation on Will Smith’s portrayal of Genie was incredibly negative, I’m thrilled to say that he’s the best part of the film. He doesn’t do a pale imitation of Robin Williams’ Genie but puts his own stamp on the character – complete with hip hop dance moves and nods to his own filmography. Naomi Scott as the mystery woman named Jasmine was also a fantastic bit of casting. She’s far from the cartoon version and offers a more well-rounded, three-dimensional portrayal of the character.

Visually, the film is bright, colorful, and evokes a lot of the cartoon come to life. However, it’s shot in a more subdued fashion than the majority of Guy Ritchie’s other films. Dynamic camera pans and tilts are noticeably absent and shot reverse shots feel completely bland and uninteresting. It feels like Disney execs may have meddled to the point of clamping down on the vibrant style choices that Ritchie usually brings to the table.

From my recollection, all of the songs from the 1992 film are in this version but all of them slightly differ from the original. For example, Will Smith now sings Arabian Nights and all of his noticeable flair and charisma is infused within the song. While it may be different, I still enjoyed it. What I didn’t like as much are the new songs. They feel slightly out of place within the film and don’t really add much to the story.

My biggest gripe of the film is the casting for Aladdin and Jafar. Mena Massoud is incredibly charming and embodies the character physically. However, his portrayal of Aladdin is very one-note. Basically, he smiles, quips, sings, and that’s about it. I never felt that he could properly emote throughout the film. The same goes for Marwan Kenzari as Jafar. To me, he was never a menacing or even remotely a scary opposing force.

Now even though I’ve been quite harsh on numerous portions of the film, the majority of the surrounding elements are what lift the film up from being a merely mediocre adaption. The 1992 version is still an overall better film but I’d be lying if said that I didn’t have a ton of fun with this live-action take on Aladdin.

Synopsis:  A kind-hearted street urchin and a power-hungry Grand Vizier vie for a magic lamp that has the power to make their deepest wishes come true.