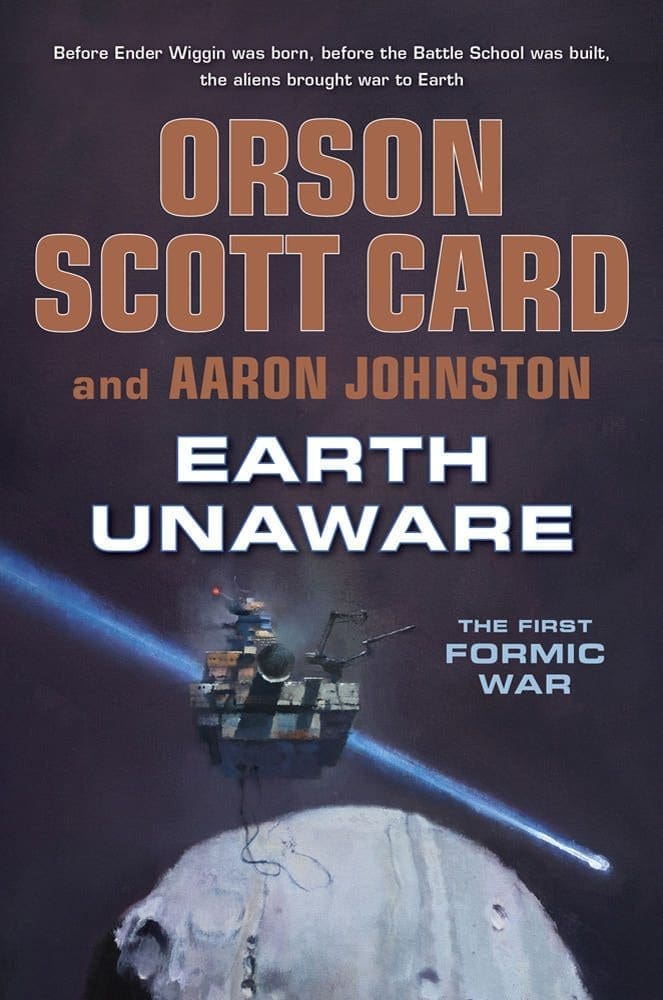 Earth Unaware is a science fiction novel by Orson Scott Card and Aaron Johnston set in the universe of Card’s cash cow, Ender’s Game. It is a prequel to Ender’s Game by a century or so.

The novel follows several major plotlines. In the main narrative, a group of asteroid miners accidentally detect an alien starcraft headed for Earth, while a young Mazer Rackham is recruited to an elite multinational Special Forces outfit. The miners form an unlikely alliance with a megacorporation ship to try to intercept the invaders, while dispatching a young man to Earth to warn everyone.

More and more, it feels like Card is leaning on the Ender franchise. Card has written non-Enderverse novels, but his big money-maker is Ender and he knows it. This story didn’t have to have anything to do with Ender. There’s the plotline involving Mazer Rackham, but there’s no clear connection between that and the bulk of the story. Rackham’s adventures take place in Indonesia, and India. The rest of the story takes place in space. It feels like Rackham’s shoehorned into the novel so they could mention Ender’s Game on the cover.

Another problem is that the book was deliberately written with a cliffhanger. It comes across as a really obvious tactic to get you to buy the next book in the series. There are exceptions to this; Tolkien wrote Lord of the Rings as one tome that his publishers split into three volumes. But more and more often, writers rely on this technique to sell novels. A novel should be a complete, self-contained narrative.  If major plotlines aren’t resolved, it’s not done, and you’ve made an artificial sequel.

It’s not a bad novel, but it has no resolution. The different plot lines don’t tie together well; it’s not obvious how Rackham’s peacekeeper work in Indonesia has anything to do with the alien threat. Card crafts characters, particularly young, bright characters very well. But ultimately, it feels like the author’s had no faith in their craft. Instead, the story relies on cheap tricks like tying it tenuously to other stories and not giving us a real resolution. Card has a history of writing books like this, with the Speaker and the Shadow spin-off series taking about three books each to reach their resolution.

It’s not a bad read, but not one of Card’s stronger outings. If you’re a diehard Ender fanboy, it’s recommended reading, as the novel opens a new part of the Ender’s mythos. If you’re a more general science fiction fan, it’s still an entertaining read—as long as you don’t mind waiting for the next one to find out what happens.

The Force is Strong With Your New Look at STAR WARS...