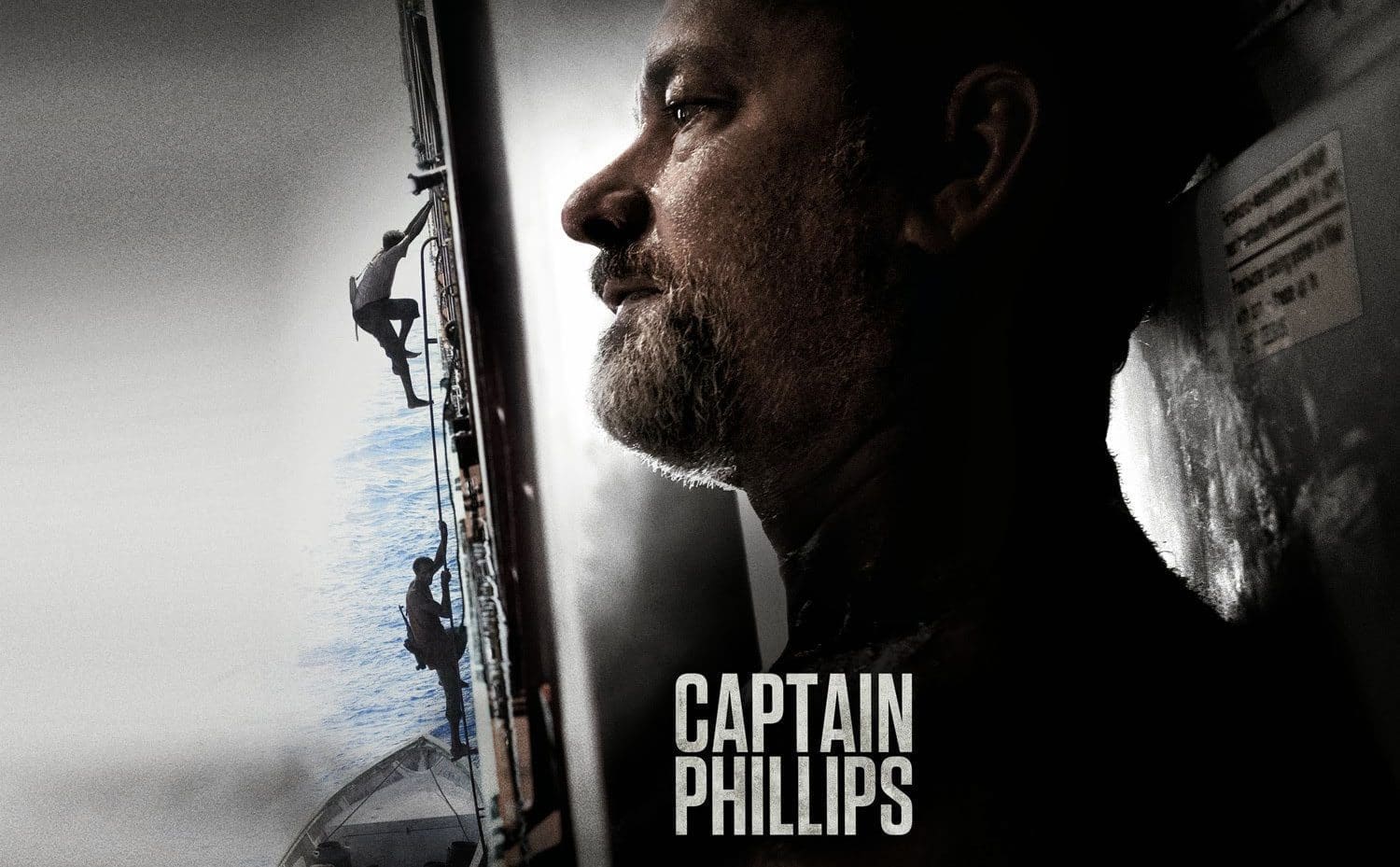 Tom Hanks is hands down my favorite actor. He has appeared in some of the most well known and well respected films that have come out over the past thirty years or so. Some of my personal favorites include: Sleepless in Seattle, Forest Gump, Apollo 13, Toy Story, Saving Private Ryan, Cast Away, Road to Perdition, and Catch Me If You Can. Even though his track record hasn’t been the best over the last ten years, give or take, I’ll say that he is still an actor that gives it his all for every role that he takes. It’s hard to put your finger on why Hanks is such a likable actor, but I’d say that it’s because he gives off the every-man vibe; he isn’t a model or someone that appears stuck-up, he’s a guy that could be your friendly next-door neighbor. Especially when it comes to his new film Captain Phillips directed by Paul Greengrass, it’s apparent that Hanks was the best choice to portray the real life man.

Captain Phillips is the true story of Captain Richard Phillips who in 2009 tried to help keep his crew safe when a band of Somali pirates hijacked their American cargo ship. The story was widely publicized through numerous media outlets due to a hijacking of that sort last being reported over two hundred years prior. The film takes place from the time Phillips departs from his wife to board the ship, till his eventual rescue.

While the films that Hanks has chosen over the last several years haven’t been the greatest, Captain Phillips is the one that breaks that long-going streak. Hanks gives a rightly celebrated performance that rivals the one he gave in Cast Away. Throughout the film, he is continuously put into peril laden situations that will have you incessantly on the edge of your seat. Even though in the back of your mind you know that he survives, the way the film amps up the tension through the use of quick cuts and a roaring score, you can’t help but think in the back of your mind that he may not endure the experience. The raw emotion that Hanks depicts makes you care for him as if he is one of your own family members. He never wavers, he never frets, he knows that any minute could be his last, but he keeps a level head and treads on.

The other noteworthy performance of the film would be from newcomer Barkhad Abdi who plays Muse, the leader of the pirates. Even though this is his first onscreen role, he is able to embody a ruthless man who will stop at nothing to achieve his goal. The soulless eyes that he presents as he stares down Phillips let you know that he is not a man to mess with. He is always crass in his actions, and he never falters in terms of making the audience think of him as a strong, powerful character.

With so much praise must also come some low-points for the film. Firstly, Michael Chernus who plays Phillips’ second in command falls completely flat in the role. His actions and presentation of dialogue felt completely lackluster and almost comedic at times. Secondly, even though Greengrass is known for the shaky-cam style throughout his films, for Captain Phillips it is irrevocably distracting. Compared to its use in the Bourne films, the technique is used in almost every shot and feels more indolent and disorienting than thrilling. Even with those faults though, the film is still a masterpiece of acting talent showcased by what Hanks and Abdi are able to do with their characters. If you have been let down by any Hanks film as of late, Captain Phillips will restore your faith in why he is still regarded as one of the best actors around.

Synopsis: The true story of Captain Richard Phillips whose cargo ship was hijacked by Somali Pirates in 2009.