And now for the 2nd installment of my interview with Steam Crow. If you haven’t heard of them, you will soon. They’ve been featured in the latest issue of Phoenix Magazine and will be hosting one of the largest booths at the Phoenix Comicon. They also have a growing fan base called “The Steam Crow Army.” In this round of questions, I ask what it takes to make their crafts, as well as find where their inspiration strikes.

What exactly goes into the process of creating one of your custom prints?

Daniel: The most important part is just having an idea. We drive a lot, Dawna does most of the driving for good reason. I have driving narcolepsy so I fall asleep quickly in the car. I don’t even know I’m sleeping. So when we are traveling Dawna will do the driving and I have a big drawing board that fits in our “Vanataur.” It’s our van, so I just draw sketches. I draw bumpy awful sketches but the purpose is to find a good idea. I have a ton of these big sheets of paper. So we take one of those and circle the ones we like and (Dawna) helps with the ideas.

Dawna: We are talking the whole way.

Daniel: I’ll ask her “Hey what do you think of this?” and she says “Hey what if we did this?” So it’s very collaborative. I’ll take it home and then I’ll draw it in Adobe Illustrator. I draw on the computer mostly because it’s how I want it to look. When I draw on the computer I’m pretty fast but I’ve slowed down. For several years of this I also had a full-time job so when you make that transition you can (slow down.) When you start out everyone has to have a job and this is their side job. You gotta make time for your secret fun job. So when I started I did the best I could, but I was always in a mega hurry. Now I can take the time to love each piece. 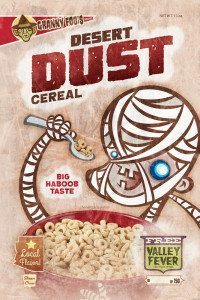 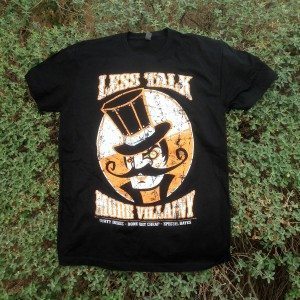 After the initial sketch is done, do you send it off for custom prints?

Daniel: The last step in the process is after draw the art, I let it sit overnight and I go to bed. The next day I look at it again and that’s when I make sure its done. I can open up the file with fresh eyes and get in there and make it look nice. So then we send it out, and most our stuff is locally done for our normal full color prints. Lately we have been doing screen printing (on wood plaques) and that’s done in our kitchen. The studio kitchen. We are doing a paper and wood edition just so we have a nicer edition of each. What I like about it is when I draw on the computer its perfect and you put it on wood and now its imperfect. It gives it a lot of character. I like that.

Aside from your custom prints and books, what are some of your most popular hand-made products?

Dawna: We do very small runs of custom toys and we’ve done pint glasses and shot glasses. I’ve made monster bags, hand made plushy bags. We’ve gotten so busy though, I haven’t had time to make them so I still have piles of fur everywhere in our house.

Daniel: It’s kind of tricky for us.  We have to balance the handmade with non-hand-made because if it were all hand made it would be very hard to make a living. One thing we’ve made is poison bottles. We recycled bottles and we make our own labels and stain them to look like antiques. It’s a crazy thing but we’re the only ones (with them) at the show.  But very few things we make go into the hundreds so when you get Steam Crow stuff you are getting something that’s limited edition. We don’t want to be in Walmart, we don’t want to be in a mass market store.

Where do you draw some of your inspiration from aside from monsters?

Daniel: Childhood and trying to remember what it was like to be a little kid. I’m still pretty much a big little kid. I think it’s also from the history of art. Art history has great things to be inspired by. We love movies.

Dawna: We read a lot of books. We are also very inspired by vintage style and vintage toys and classic design. His mom quilts by hand and does folk art painting and churns her own butter and is a total cowgirl. That has a lot of influence too. 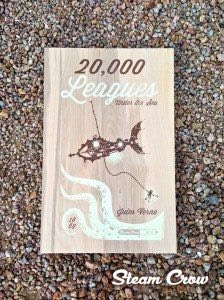 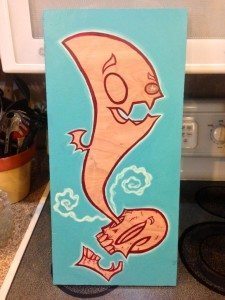 Some of your work has been compared to the Cold War style of propaganda art work. Does that era influence you?

Daniel: I grew up during the 70’s and 80’s so the Cold War was definitely a big deal. I love propaganda art and the artwork from the Russians. I won an essay contest in 7th grade for an essay called “What My Country Means to me.” I read it recently and its crazy. It just sounds like propaganda. “America is the best. Those Russians don’t understand that America is the best.” It was crazy. So that influence is there. I just think that design is powerful, its made to influence.

Dawna: I think it tells a story too. It tells a story of the future of what you can be together. And it also tells a lot of what’s going on at that time. It’s a good combination. I like art for art’s sake but I really love art that has a narrative in it.

You both started out as musicians in separate grunge bands. Does anything from that lifestyle and philosophy carry over into Steam Crow?

Daniel: Absolutely. For instance, I was never in a successful enough band to go on tour but I always wanted to. Today, we go on tour all the time and we have road cases that carry our prints. They look like amplifiers. Everything I know about branding comes from branding our band.  Choosing a weird name and thinking about logo designs and what the band meant and what it wasn’t going to be. So we thought about it a lot for (Steam Crow.)

Dawna: Doing it yourself. The DIY thing. Making your own marketing and making everything yourself. My band went to a recording studio and we made our first tape. We pooled all our money together and did that so we had something to sell to our fans. Budgeting, marketing, that’s all part of it and who we are.

Who is your favorite movie villain of all time?

Daniel: Man, that’s a tough one, there are so many good ones. Theres always Jareth from Labyrinth. I like Aku from Samurai Jack.

Dawna: I guess Darth Vader was the big epic villain from my childhood. The guy from Big Trouble Little China is always good too. Zorg from Fifth Element is another one.The funny ones are the best though. That’s what makes Lo Pan ( Big Trouble, Little China) so great. He had great one liners. 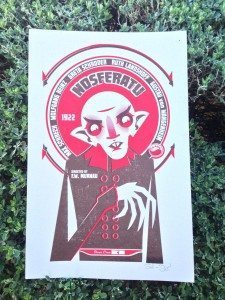 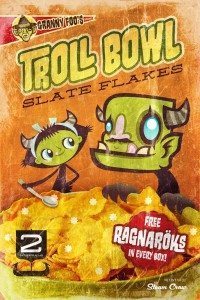 So what about monsters then? Any favorites?

Dawna: I love the Bride of Frankenstein. She’s so iconic and she’s only in the movie for 15 minutes. She is the one who stuck with me the most. Then of course there’s the big monsters. Godzilla was a huge influence for us. What I love about Godzilla is he comes and fights the other monsters that are destroying Tokyo and then he turns and destroys Tokyo because he’s still mad at them. He’s the savior and the villain at the same time. I like that combination.

Daniel: There are so many. For me it’s always a journey back to childhood. I discovered monsters watching Creature Feature on TV or midnight movies. Frankenstein, amazing. Creature of the Black Lagoon, amazing. All of the Harryhausen films. The most iconic for me is Nosferatu. When you watch that guy, Max Schreck, he was just crazy cool and weird.

What is the future for Steam Crow?

Daniel: We are trying to build a sustainable brand. We want to be special to people but we don’t want to be everywhere for everybody. We’re for the cool kids. We just want to make it exciting and we are excited about what we create and hopefully make our patrons excited to support us. This is our dream job.

Be sure to stop by and check out exclusive prints from Steam Crow at Phoenix Comicon 2014, June 5th – 8th, booth 779! 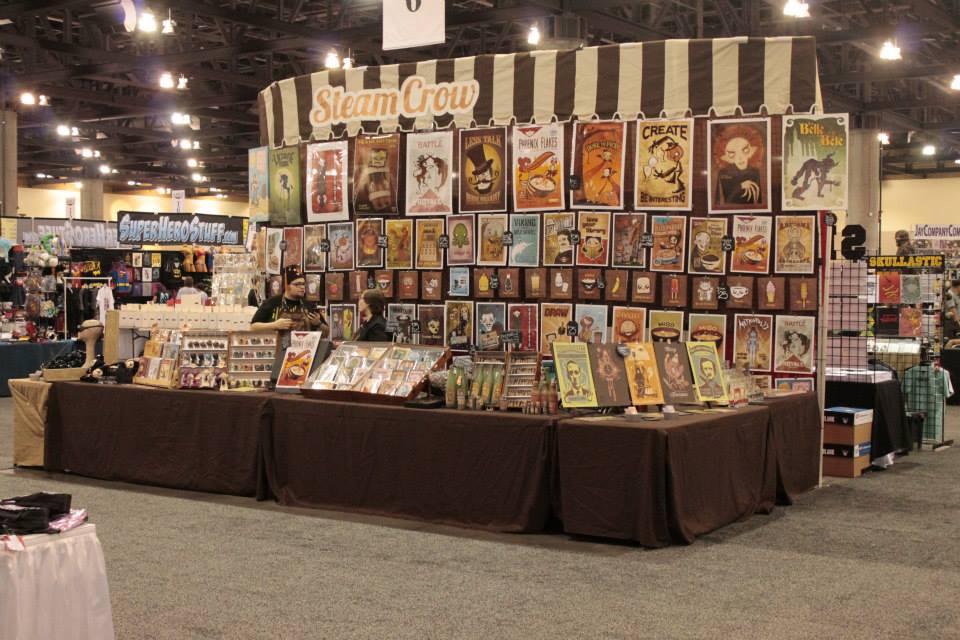