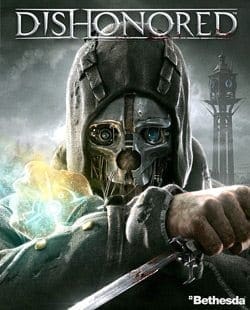 Right off the bat, let me explain that I fully realize that my viewpoint on Dishonored may be unique. Since a few weeks prior to its release the game has pulled in quite a fair share of praise and high review scores; which was part of the reason that I opted to invest in a day one/preorder purchase of the latest game published by Bethesda. It is likely that my views are entirely my own and not shared by the rest of the fine folks at Geek News Network. Now that that rambling introduction is out of the way, let’s discuss Dishonored.

When I originally came across Dishonored in a cover story done by Game Informer earlier in the year, I thought to myself “Well, this looks quite interesting.” It wasn’t until I finished the article that I started thinking that this would not be the game for me. The description of it on further review read too much like another take on Deus Ex, not the classic game of the early 2000’s, but the forced sequel Human Revolution. For those who might not know, I absolutely hated Human Revolution; detest it might even be a better choice of words. The story was mediocre, with sub-par characters and a boring stealth/combat system. I sank four or so hours into that world and found nothing worthwhile in it at any point.

From the start of the game we’re thrust into the world of Dunwall, and given a look at a steampunk-based world infested with a plague spread by rats. Dunwall isn’t the entirety of the world however, but a single island nation within a conglomeration of other islands all existing in a seemingly larger world. Right away this concept pulled me in: I’ve always been a sucker for a story taking place in a tiny section of a much larger universe. The knowledge of what was going on in the rest of this world may honestly have been the only thing that kept me going for as long as I did. You play as Corvo, bodyguard to the Empress of Dunwall and protector of her daughter as well. That is until an unfortunate assassination that leads to your imprisonment and the beginnings of a rebellion.

The story notes, even from the get-go is classic literary stuff and there is nothing wrong with it. The characters are seemingly well-developed, as is the world. The story begins heading off from this point in a predictable, albeit interesting way; allowing you to explore whatever area you’re in and essentially doing whatever you wish — to an extent. In the early hours of Dishonored I found all of this enjoyable and fascinating. Something changed as time went on, and that’s part of what I’m trying to really figure out.

Usually when a game has a well-defined mission structure I find myself structuring my own life around that, or such. If I sit down to play a game such as Dishonored I would normally make sure to start the next mission and play through it in its entirety, no matter the length, in a single sitting. This is how I have always played games, and until such time as I have a little ankle-biter roaming my house I will continue to play as such. Then why is it that starting with the third mission of the game I found myself taking frequent breaks to do other things mid-mission? On one such occasion I had managed to sneak into a local brothel with the express goal of assassinating a pair of twins; yet the moment I made it onto the property I clicked save and wandered off to investigate something “important” FailBlog. For those who don’t know me, I only browse FailBlog’s sites when I’m either extremely bored or it is really late at night and I need something to dull my thoughts so I can go to sleep. Events such as this were frequent for the remainder of my time with Dishonored, which is truly a pity.

Ultimately, I can’t put my finger on why the game was so disappointing to me. The storyline was no worse than a multitude of other games I have played to completion, the characters varied in goals and types. The combat was fairly mediocre, but it is a stealth-based game so this may be somewhat excusable. There was just a lack of engagement on the part of Dishonored and perhaps it might just be me. I was surprisingly super enthralled by Fable: The Journey only a few days prior, so maybe the timing was just off. The game also did release just a few weeks prior to my second most anticipated game of the year: Assassin’s Creed III, so perhaps I wasn’t engaged because I simply wanted to explore colonial America and not steampunkian Dunwall.

There are many logical factors as to why I wasn’t engrossed by the world of Dishonored; which I’m sure I’ll be struggling to explain for some time to come. Ultimately all I can say to Dishonored is “Sorry, I’m just not that into you.”

Top 11 Things Geeks Have to Be Thankful For