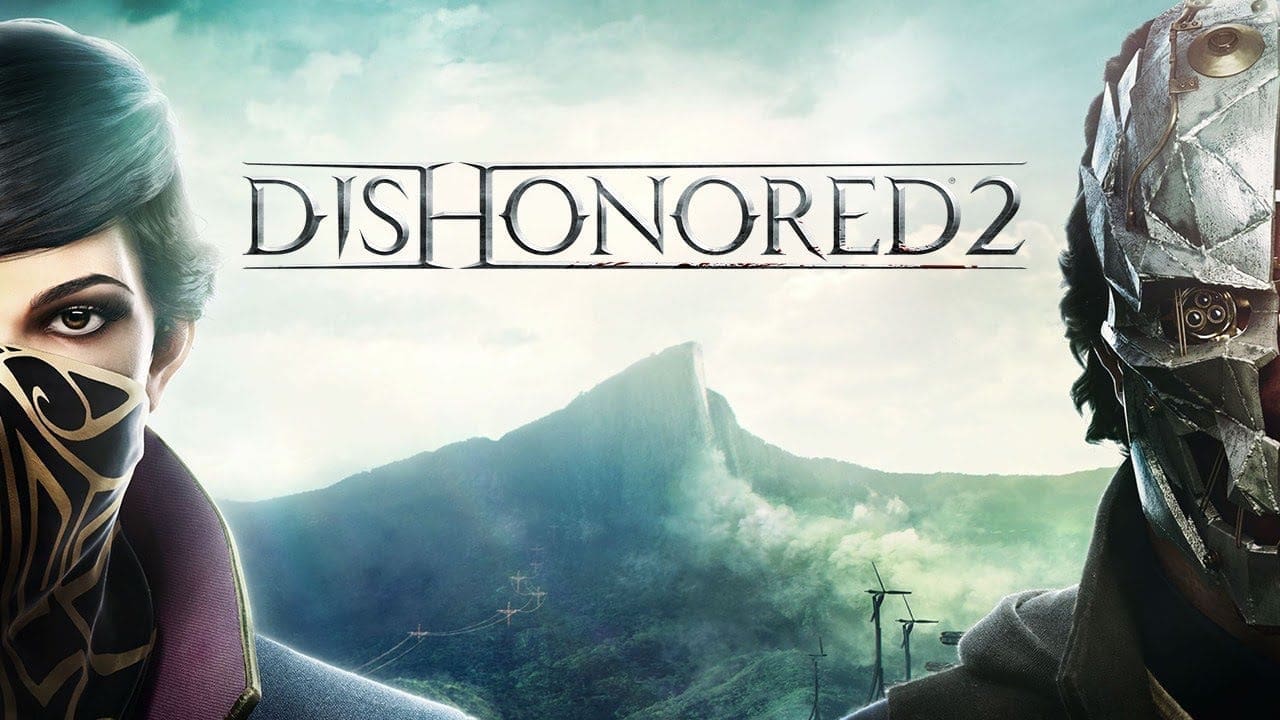 Arkane Studios is back and better than ever with the latest entry to their supernatural stealth series, Dishonored 2. For those not familiar with Dishonored franchise, let me catch you up real quick. The first Dishonored followed the story of protagonist Corvo Attano, bodyguard-turned-assassin. Corvo is framed for the murder of Empress Jessamine Kaldwin, who he was assigned to protect. Lady Emily Kaldwin, heir to the throne (and, as we later discover, Corvo’s daughter) is also captured. While awaiting execution, Corvo is visited by a mystical being known as “The Outsider” and is gifted with his “Mark”. This “Mark of the Outsider” gives Corvo numerous supernatural abilities that he uses to escape prison, and, in turn, dismantle the conspiracy that sought to blame him for Jessamine’s death. 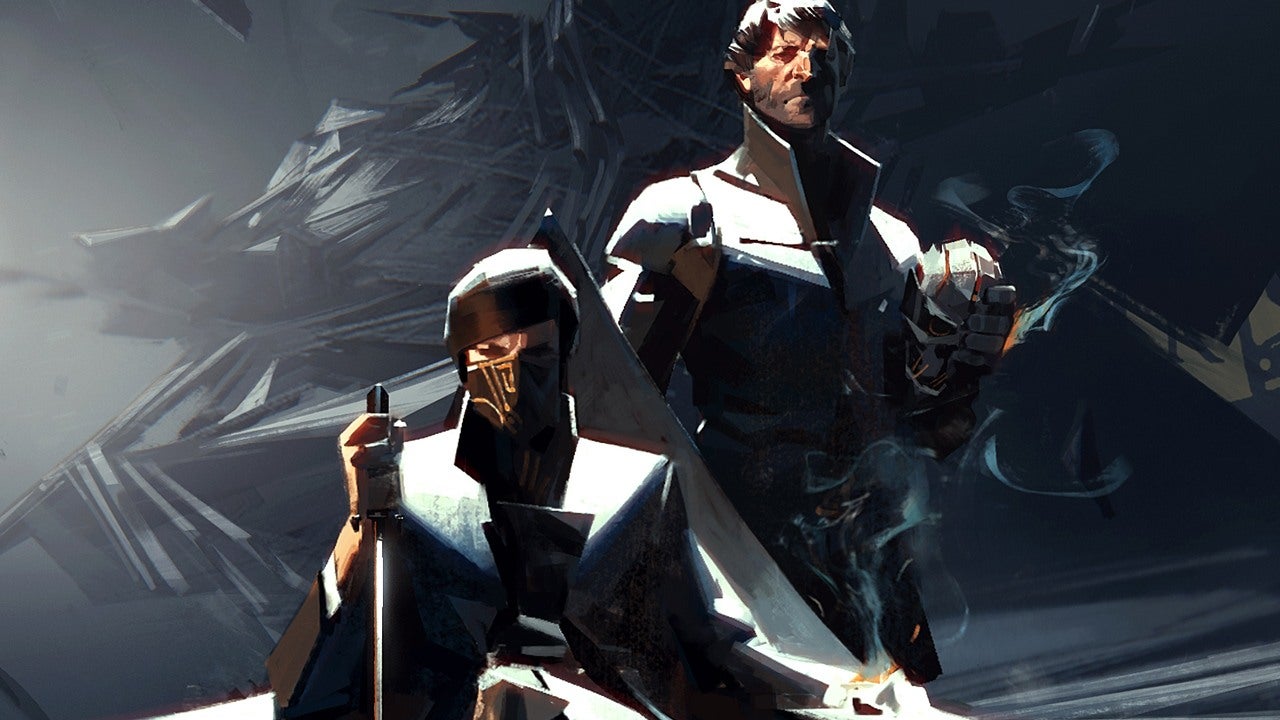 Dishonored 2 picks up 15 years later, with Empress Emily on the throne and her father, Corvo, at her right hand. Naturally, the 15 years of peace and prosperity are almost immediately interrupted by another conspiracy to frame Corvo (and now, Emily) for murder. Emily’s long lost Aunt Delilah shows up and simultaneously claims the throne while also blaming Corvo and Emily for a series of murders that had been taking place. You’d think 15 years of prosperity would buy Emily the benefit of the doubt, but you’d be wrong. Virtually every guard immediately turns on the Empress and Royal Protector. As this all unfolds in the throne room, the game prompts you to play as either Emily or Corvo. Based on who you choose, the other is immediately taken captive by Delilah while “you” are locked away and, if you’re playing as Corvo, Delilah supernaturally rips the Mark of the Outsider from your hand. Alone and powerless, you must escape the castle while figuring out how to rescue your closest ally from this new usurper, Delilah.

Customization is the name of the game in Dishonored 2. The initial decision to play as Emily or Corvo is the first of numerous decisions that change your playthrough in major ways. Corvo and Emily are approached by The Outsider shortly after their escape and are offered to gain (or regain) the Mark. Notice I said offered and not given, as you can choose to deny the Mark and play through the game powerless. If The Outsider’s gift is accepted, Corvo regains access to his original selection of powers (though he has to find more runes and unlock them once more) while Emily has her own set of powers that fundamentally change how you play. Returning players will be intimately familiar with Corvo’s arsenal of abilities like Bend Time, Blink, and Possession among others. While Emily shares the same selection of passive abilities like Shadow Kill, Vitality, etc. her active abilities are completely different with the exception of Dark Vision. Domino links up to four enemies minds together; kill one and the rest will immediately suffer the same fate. Shadow Walk turns Emily into a living shadow, useful for sneaking in darkness or making a quick getaway when cornered. Far Reach can pull Emily to objects like ledges or walls to quickly traverse the map, or can pull enemies and items to Emily from a distance. Mesmerize tears a hole into the void showing up to four enemies a vision so powerful they stop and stare, oblivious to their surroundings. Lastly, Doppelganger conjures a decoy version of Emily that can distract enemies or even fight alongside you. The powers you choose to acquire and upgrade truly shape the way you play. Finding synergy between various powers is where Dishonored 2 truly shines. Gameplay is king and Arkane Studios absolutely nails it. 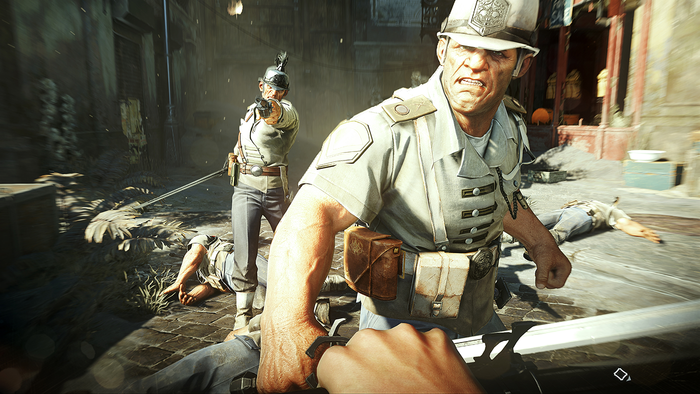 The story, while not particularly bad, isn’t exactly captivating. The story is very much in the same vein as the first game, dismantling a conspiracy by eliminating various targets as you work your way up the hierarchy. There were a handful of nods to the previous game as well as a cameo from an old ally, however, the allies that I wanted to see return had either explicitly or implicitly passed away at some point in the last fifteen years. The cities you traverse breathe enough life into the story to keep you going, whether it’s the comments made by civilians passing by, or watching how the world changes based on how chaotic your methods are. While not the end of the world, I do wish Corvo and Emily could both be played in the same playthrough rather than being completely locked away from the get-go. After seeing last year’s Assassin’s Creed Syndicate find the perfect formula for playing as two protagonists I would’ve loved to see Arkane take some notes.

Dishonored 2 is a game that begs to be played repeatedly as each playthrough can be radically different. For example, I ran two playthroughs before reviewing: a lethal playthrough with Corvo primarily using Blink, Bend Time, and Shadow Kill on Hard, and a non-lethal playthrough with Emily primarily using Far Reach, Shadow Walk, and Domino on Normal. Whether it’s the powers you choose, the difficulty you play on, or even whether or not you choose to kill, there’s a multitude of reasons to keep coming back to Dishonored 2. Incredibly polished gameplay and challenge far outweigh a lackluster story. Arkane doubles down on what they did right last time while letting their shortcomings lie. Dishonored 2 is a game that should absolutely not be ignored.

Dishonored 2 is out now on Xbox One, Playstation 4, and PC. (Note: While I have seen mention of issues on PC, I ran into no issues while playing on Xbox One)

Let us know below what you thought of Dishonored 2 and what your playthrough looked like!

[…] Dishonored 2 stands out as one of the biggest games this year, check out our review here! […]