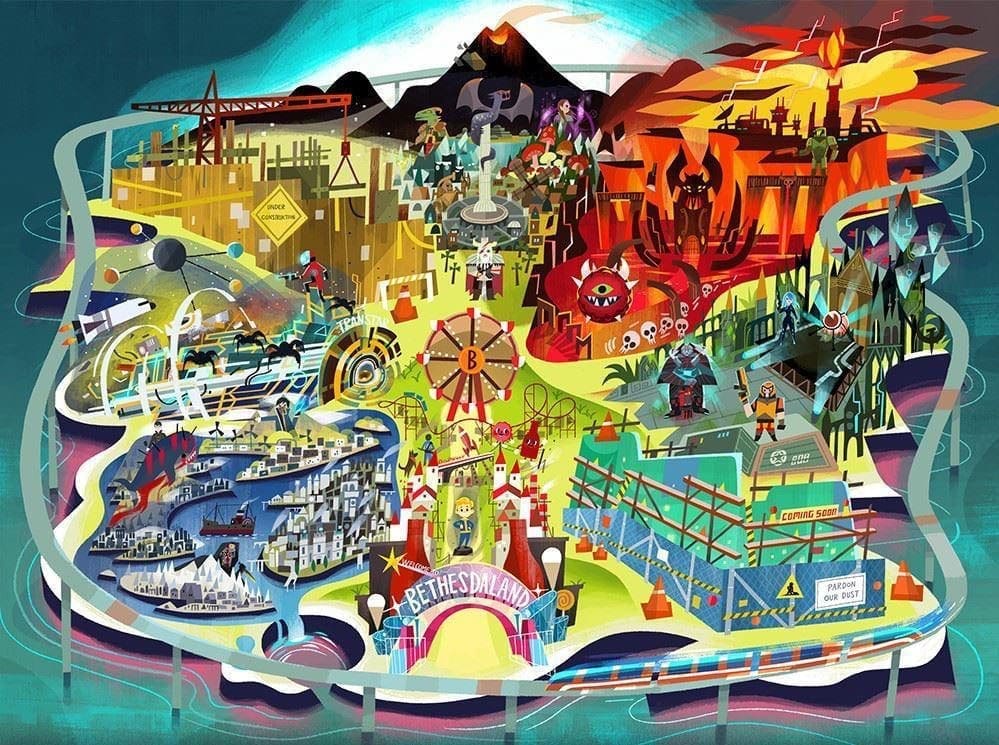 For the third year in a row, Bethesda joins the ranks of powerhouse publishers and console-making companies with their very own E3 press conference. Below are the major announcements and reveals from Bethesda!

The conference opened with an intro from VP of PR and Marketing for Bethesda, Pete Hines. He then showed off a selection of games coming from Bethesda’s VR team, including DOOM VFR and Fallout 4 VR. The former being a VR experience and the latter the full game playable in VR.

New weapons, armor, gameplay enhancements and more will augment the existing mods for Fallout 4 and Skyrim with content made my Bethesda, outside studios, and select community content creators.

Skyrim was a notable part of the original Nintendo Switch reveal, but now we have a full-fledged trailer for the Amiibo-enhanced Switch version.

A new trailer was shown for a new expansion to the CCG coming next month to iOS and Android: Heroes of Skyrim. As the name implies, this card pack focuses on creatures and fighters from Elder Scrolls V: Skyrim.

Dishonored: Death of the Outsider

UPDATE: This is a new standalone experience, not DLC as originally reported. It will cost $29.99 Original: This new DLC follows Billy (the ship captain) and the assassin Daud (responsible for the death of the Empress in the first Dishonored) as they attempt to hunt down and kill the Outsider. Billy appears to have a number of supernatural abilities and if the Dishonored 2 campaign is any indicator, both Daud and Billy will be playable. Check out September 15th!

You can sign up for the Quake Champions Beta here.

The Evil Within 2 was revealed with a lengthy cinematic trailer followed immediately by gameplay. The game looks as delightfully creepy as it’s predecessor. The first Evil Within was a surprise hit and it’s much-deserved sequel releases Friday the 13th this October.

B.J. Blazkowicz is back once again and will be fighting not only Nazis but the KKK it seems as well. BJ’s revolution begins October 27th, 2017

Pete Hines closed out the press conference with another significant announcement: everything shown in the presentation will be out this year. Bethesda continues to break the E3 mold and I’m excited to see what the rest of the week holds!