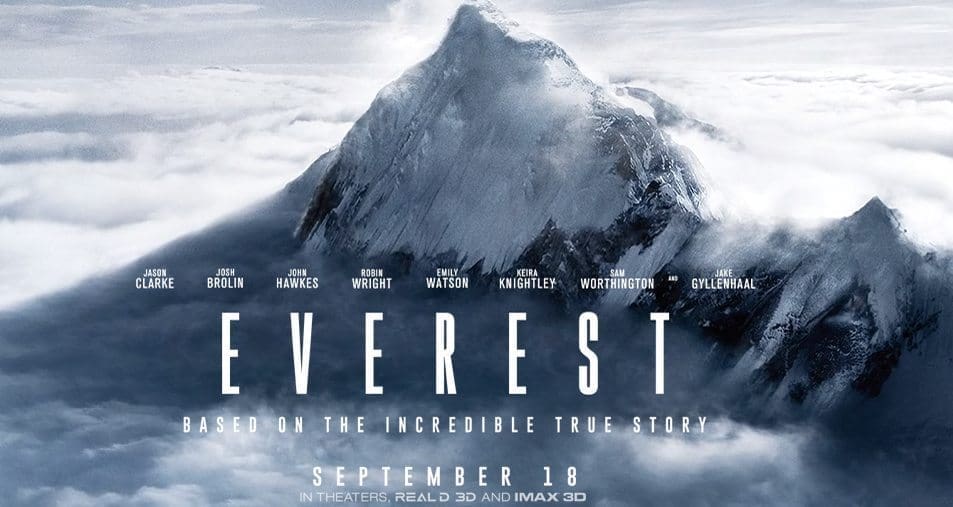 Everest is a movie that shows you first hand what can happen when you take mother nature head-on. It was a pleasant film that felt a lot like a memorial for the people who have lost their lives on the mountain side. The filmmakers took the right angle with this one, making it IMAX and 3D. These two aspects of the film brought me intimately closer to what was happening. While I didn’t connect with the characters, I certainly connected with the mountain on many levels.

The film is about two expeditions taking on the highest mountain in the world. On May 10, 1996 they attempt to summit the mountain. The expedition is led by Rob Hall (Jason Clake) who decides to team up with mountaineer Scott Fischer (Jake Gyllenhaal) to get a group of clients up to the top and back down safely. Thankfully, they have Helen Wilton (Emily Watson) back at base camp keeping them up on the weather conditions.

Rob Hall lets things push him outside of his safe return window, putting his life and the lives of others at risk. While moving outside their window of time, the expedition is hit by a spectacular storm that puts these people in a battle against mother nature herself.  While these men and woman battle for their lives, their loved ones worry at home, in their hearts knowing that the mountaineers might not return at all.  Rob’s wife, Jan Arnold (Keira Knightly) is carrying his unborn child, giving Rob one more good reason to make it to the bottom.

When I went into Everest I was asking myself, what is going to make this movie stand out from the many other tales about man versus nature? I’ve seen hundreds of movies and even more documentaries that have told stories about Mount Everest and men taking on the wild. That being said, Everest was a solid film. The cinematography was quite good, with every moment the camera panned out I was eagerly taking in the landscapes and beautiful vistas. One thing I will say for certain was that the film needed more climbing. I really wanted to see more of the obstacles that these brave adventurers had to face.

The movie fell flat due to it’s lack of substance, I cared about the mountain but I didn’t feel much for the people climbing it. Nothing had me really vested in who they were. When I found myself starting to learn more about a character and getting into who they were, the film would focus on someone or something else and my interest was lost. Had the film given about 30 more minutes to character development and bonding, it could have met its full potential. The best parts of the movie were the climbing sequences, but the director should made the best scenes the ones with dialogue, or at least make them more interesting. Make me care about the people involved, keep me vested. I will say this though, the actors themselves did a splendid job, especially Jason Clarke. I didn’t see the actor, I saw Rob Hall.

I do want to give the viewers a bit of a warning here, or more of a heads up. This movie seemed like a send off, or memorial to the adventurers that lost life and limb trying to conquer one of the most unforgiving mountains on our planet. Everest doesn’t mess around, if you make a mistake it WILL kill you. In the movie, Robert Hall seems like the expert, with his mission to get every man or woman down safely even if that means missing the opportunity to summit the mountain. So why does this man go against his own principles? The movie shows him one way then flips him willy nilly. That broke the immersion for me. I need a better reason to understand why this man  that they built up as a strong protector, would risk his life and the lives of others so someone could get his summit. Other than that, the story was very believable.

So, the question of the day is should you go see Everest? If you are into mountaineering or hiking and have an interest in the story, go for it. It’s not a bad film, it’s just not a great one either. The IMAX 3D presentation got us up close and personal and it worked out very well. Everest was entertaining and I learned some things about the mountain and those who tried to beat it that I didn’t know prior to going in. In closing all I can say is don’t go in with high expectations, just sit back relax and enjoy the eye candy.

Synopsis: A climbing expedition on Mt. Everest is devastated by a severe snow storm.