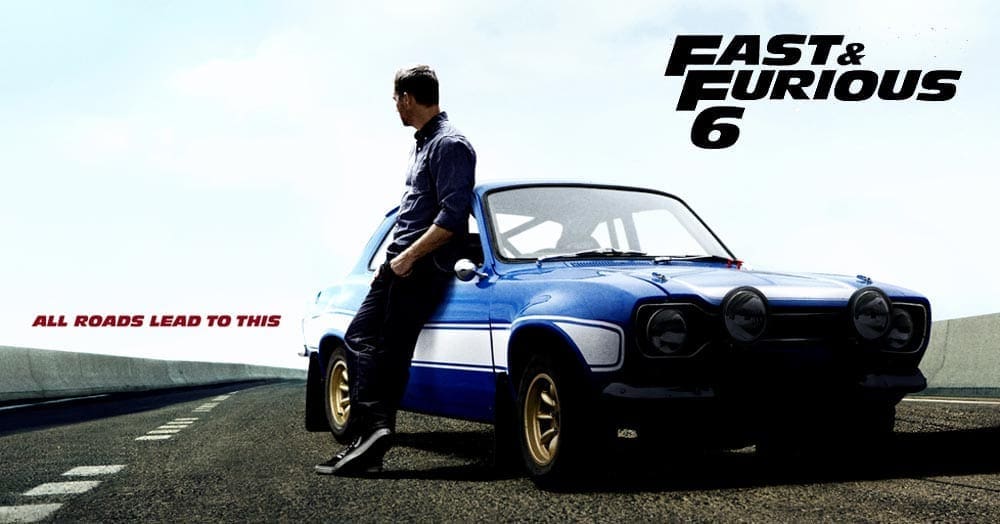 The entirety of The Fast & the Furious franchise is something that I have a great fondness for. The first film in the series got me hooked and helped me to love every new chapter thus far. I can still remember back to where my friend Brent loaned me his copy of The Fast & and the Furious on DVD and told me that it is something I’d thoroughly enjoy. Now, not being a car guy or even a big movie fanatic at the time, I simply took his word for it and popped it into my DVD Player. To my delight, the film took a fictional yet based-in-fact look into the seedy underbelly of illegal street racing that I was completely unaware of. From the first race between Dominic Toretto (Vin Diesel) and Brian O’Conner (Paul Walker) to the astounding last race where Dom’s car goes sailing though the sky right after jumping in front of a speeding train, I simply couldn’t believe what I had just watched. This film had everything I wanted and more – marvelous action, cool down-to-earth characters, and fast, tricked-out cars. Fast forward almost twelve years later and we get the latest addition to the franchise – Fast & Furious 6, which is directed by Justin Lin, director of the last three films as well.

The title of the film says it all; this is the most thrilling, frenzied, and character-packed chapter in the series so far. The plot carries over from the stinger of the last film where you find out that the character of Letty (Michelle Rodriguez) isn’t actually dead. Luke Hobbs (Dwayne Johnson) finds Dom and asks him to get his team back together in order to go after a man named Owen Shaw (Luke Evans), who he believes is behind an attack on a Russian military convoy. Using the leverage that Letty is now alive and a part of Shaw’s crew, Hobbs is able to convince Dom to team up and go after Shaw. From that point on, the film turns into a series of big action set pieces that not only include street races and other car-related events, but also numerous hand-to-hand fights. The addition of Hobbs’ new partner Riley (Gina Carano) to the cast is very welcome as it inserts more female talent onscreen within such a male-dominated franchise. She is able to perform some of her UFC moves in the most memorable brawl within the film, as she and Letty go toe-to-toe in an insane show of female brutality. Like all the films, the story is definitely there, but it takes a backseat to the shocking visuals that are seen onscreen. Both people and cars fly though the air, characters exchange gunfire in vast amounts, and explosions rock the frame in almost an atomic detonation sort of way. This is a film where practical effects outweigh digital ones in a colossal manner, and by doing so, helps to engage the viewer much more substantially than the CGI ridden films as of late. You connect with the characters onscreen much more because you know that an actual person is risking their life to perform such a harrowing stunt instead of a computer created image.

That being said, the action is top-notch, but that ultimately can’t fix the third part of the film being filled with many plot holes and gaps in logic. I understand that this is an action film first and foremost, but when a plane landing strip scene takes around ten minutes, the plane is constantly moving at high speed, and somehow doesn’t run out of runway within that time, it really starts to bug me. Not only that, but when characters have an opportunity to kill the antagonist and there is no reason they don’t… it reminds me of the scene from Austin Powers where Dr. Evil decides to put Austin in an easily escapable room where Scott Evil then berates him on why he doesn’t just kill him instead. These may seem like minor qualms, but they begin to add up and remind me that story is unfortunately on the back-burner for these types of films.

When push comes to shove and everything comes full circle, I must say that this is the most entertaining film in the franchise up to this point. Adding to that, this is also the most comical addition to the series, with jokes being cracked at least every five minutes, which hit their make nearly every time. Even with its faults, this is a film that newcomers to the franchise will enjoy and longtime fans will appreciate immensely.

Synopsis: Dom and his crew team up with Hobbs to take down a malevolent driver who has a gang of terrorists under his control.

It Chapter Two | Fun Scares And Closure Make For A...