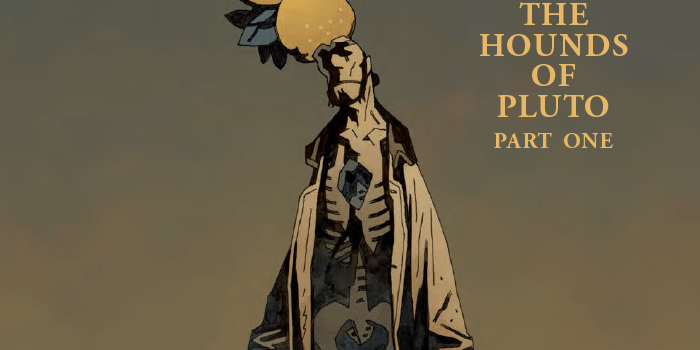 Hellboy was dead, to begin with. There is no doubt that Hellboy was dead. This must be distinctly understood, or nothing wonderful can come from this story.

Hellboy, Mike Mignola’s creation of the red-skinned demon found during World War 2 and raised by Professor Bruttenholm of the Allies, died in London in 2011’s HELLBOY: THE FURY # 3. I love that Mignola tells his stories as fast or as slow as he needs to and in how he releases them at various points throughout the HB timeline. And folks, this story was worth the wait.

Currently in the middle of their HELLBOY IN HELL series, in August and September we get to a two-part story called “The Hounds of Pluto.” At the beginning of the tale we visit the bowels of Hell, where it turns out, Hellboy is dying…again.

He is without his usual cast of characters (they are back in the living world), graying out and becoming weaker and as the story jumps around in Red’s mind – we get a glimpse of London after it was wiped off the face of the Earth and what it has become after his sacrifice.

Doctors (in Hell) describe what’s happening as a parasite attaching itself to his soul…can’t this guy catch a break? Where the story goes next is cuckoo bananas and I loved it.

But that’s just the story…the visuals on Part One of “The Hounds of Pluto” are absolutely amazing, from the bareness of pen and ink in an almost Dia de los Muertos design aesthetic to the watercolor look of the aforementioned London, the inventiveness and colors are wondrous….at once bleak and lustrous.

To be honest, I haven’t been a huge reader of Mignola’s comics in the past…I’ve dabbled here and there. But with this issue, I see something I wasn’t expecting and I’m going to hit my comics store to snag a print copy of this one when it’s released on August 26.