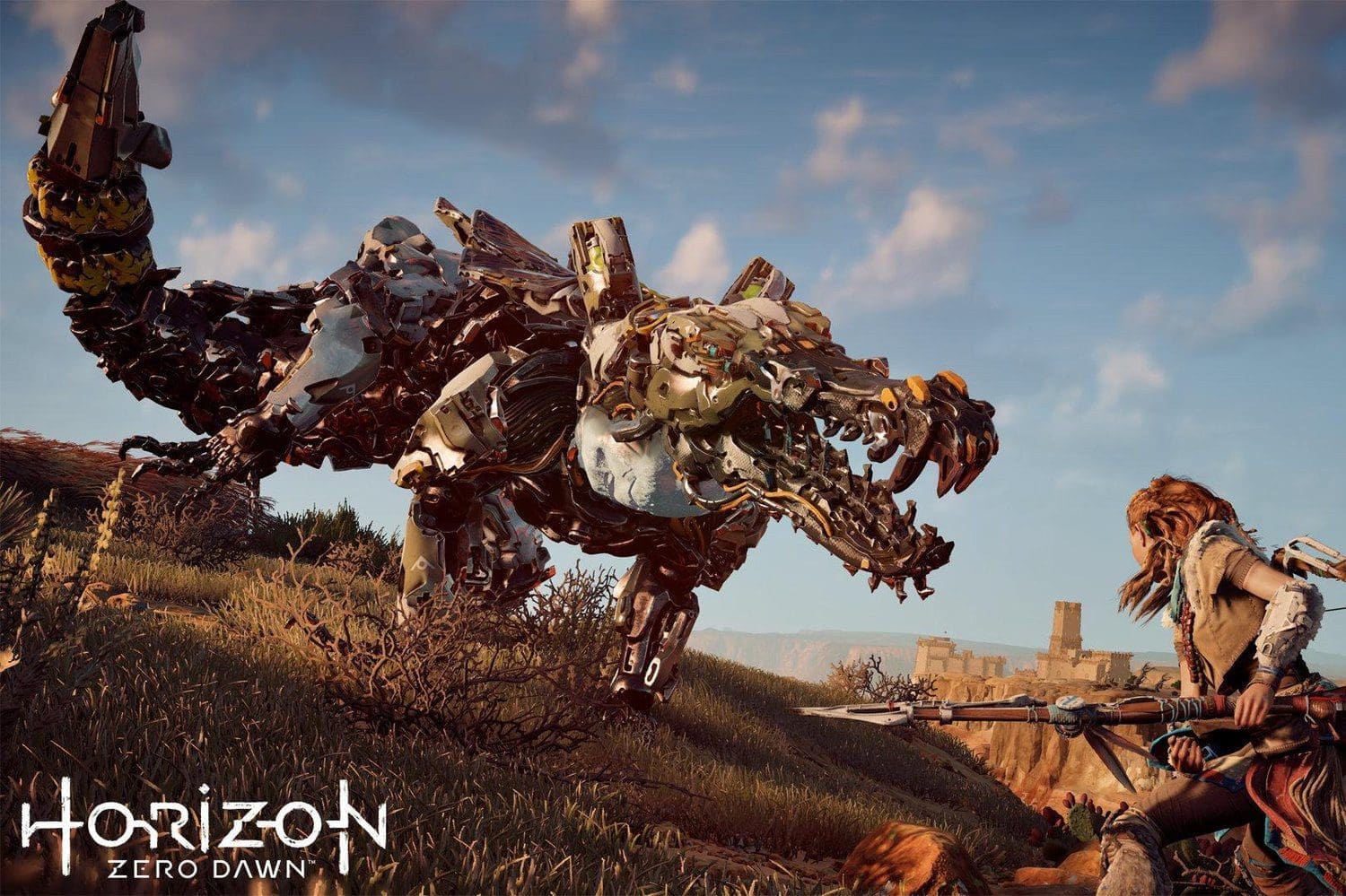 We, as gamers, find ourselves in one of the most crowded, competitive seasons in recent memory as a multitude of heavy hitting titles fight tooth and nail for a second in the spotlight. Whether it’s the return of staple franchises like the Legend of Zelda and Mass Effect, the emergence of new IP like For Honor, or even a brand new console in the Nintendo Switch; the slightest misstep can spell disaster for an otherwise successful product. In this maelstrom of releases, Horizon Zero Dawn stepped up to the plate and knocked it out of the park in a major way. Horizon Zero Dawn is the latest from Guerrilla Games, a studio every PlayStation fan is familiar with, as they move away from the first-person shooter heritage (and long-running franchise, Killzone) to bring us a third-person open-world RPG. They say the darkness comes before the dawn, a fitting euphemism given Killzone’s traditionally darker tone, and while Horizon is a new step for Guerrilla, it is a welcome one. Horizon Zero Dawn is set in the near future on a post-apocalyptic Earth where mechanical beasts roam the land, sea, and sky as humans have reverted to a tribal way of life. Life as we know it ended following a catastrophic event that was a direct result of humanity’s development of robotics and artificial intelligence. With virtually all of the information surrounding this event lost, members of our civilization are simply referred to as “the Old Ones” and the use of our remaining technology is a point of controversy among the tribes. Players take control of Aloy, a young hunter raised as an outcast due to the unusual circumstances of her birth. When her tribe is attacked by an unknown faction enhanced by the technology of the Old Ones, Aloy sets out to find answers to the questions that plagued her most of her life: Where did she come from and what happened to the Old Ones? These questions drive the narrative of Horizon and the answers you’ll find along the way are truly incredible. This narrative is supported by compelling side quests and meaningful collectibles that help flesh out the fascinating lore of this new universe. Present-day politics are cleverly woven into Horizon’s story without beating you over the head. Aloy is a strong, outspoken female protagonist which is a refreshing change of pace for a medium dominated by male protagonists, and ultimately her sex/gender doesn’t affect her journey any more than her hair color does.

https://www.youtube.com/watch?v=RRQDqurZJNk
Horizon’s combat system takes the best parts of Far Cry and Monster Hunter and delivers a truly challenging and engaging experience that will keep players vigilant in their adventures across an ever-changing landscape filled to the brim with a diverse roster of machines. There is a sense of humility and vulnerability as you pass groups of machines; even with top-tier weapons and armor I often opted to go around machine sites rather than pick a fight. Each of the 25 breeds of machines has a unique anatomy with various elemental weaknesses or strengths that must be kept in mind if one hopes to best them in combat. Some of these weaknesses can be exploited for increased damage or harvested for resources to use in crafting various ammunition. Facing a group of any one breed can be a challenge, but when multiple breeds are thrown in the mix the combat dynamic changes entirely. It’s difficult enough keeping track of which ammunition to use or weaknesses to target when fighting a group of machines, this challenge is compounded when some machines can be airborne or burrow underground. Aloy has multiple bows at her disposal, each with a variety of possible ammo types ranging from traditional hardwood arrows to elemental arrows imbued with frost, fire, or electricity and many in-between. In addition to bows and slings, Aloy also has numerous trap options like tripwires or mines; all of which should be used in tandem in order to overcome more difficult foes. While the RPG elements in Horizon aren’t as in depth as something like The Witcher, there’s enough to make the gameplay feel tailored to the player. Dialogue options, for example, don’t affect the overarching storyline but they do help add flavor and depth to Aloy as a character. The prominence of her compassion, tact, and anger ebb and flow as the player sees fit. Sure, I could have forgiven a man who wronged me and helped him be a better person. But I’d be lying if putting my spear in his gut wasn’t satisfying. Horizon has a basic, straightforward skill tree system that lets players boost Aloy’s stealth, combat prowess, and resourcefulness. Prefer stealth? Then the ability to sprint silently or dispatch unsuspecting foes in one hit will see a lot of use. Going in guns blazing? Then maybe a trusty machine by your side or a couple more notched arrows will do you some good. No matter your play style, you’ll find skills that will prove invaluable in your journey.

There are a number of telltale signs scattered throughout Horizon that are indicative of it being Guerrilla’s first open-world RPG. Guerrilla made mistakes that other studios in the genre learned long ago. The most glaring offense is part of the world map, a crucial tool in an open world game. Not only is there no legend for the plethora of icons on the map, you can’t sort or toggle the icons at all. One of Horizon’s strong point is the fleshed out world, but having every icon and indicator shown at all times turns the map into a cluttered mess that is a pain to navigate. There were a handful of technical hiccups I ran into during my time with Horizon, not enough to affect my playthrough in any major way, but I’d be remiss if I didn’t mention it. Whether it was a machine’s body bouncing around a canyon or a resource stuck in a wall, while not a major inconvenience, these hiccups did briefly interrupt the otherwise immersive world. Another immersion-breaking flaw is the audio sync when conversing with others. The character models in Horizon are some of the best I’ve ever seen, but when the audio is out of sync with the movement of the mouth it detracts from the experience. Most of the technical issues I encountered seem minor enough to be easily remedied by a little more QA (and perhaps will be addressed in a patch) but were immersion-breaking nonetheless. Horizon Zero Dawn is a bold new step both for Guerrilla and for PlayStation, heeding some lessons from those who came before them while overlooking others. The narrative and gameplay loop of Horizon is immensely compelling and spearheaded by a grounded, likable protagonist. So compelling in fact, that I got the platinum trophy before I began this review as I could not tear myself away from the incredibly immersive world. There’s no denying that Horizon Zero Dawn is something special, and I eagerly await its inevitable sequel. Horizon Zero Dawn is a strong showing from Sony’s first party and cannot afford to be missed by PlayStation 4 owners. Pick up Horizon digitally and at retail today, only on PlayStation 4!

[…] Zero Dawn. Without getting into too much detail, Horizon is a new IP from Guerrilla Games and we absolutely loved it. A story expansion has been confirmed and a teaser of some sort would remind those who might have […]