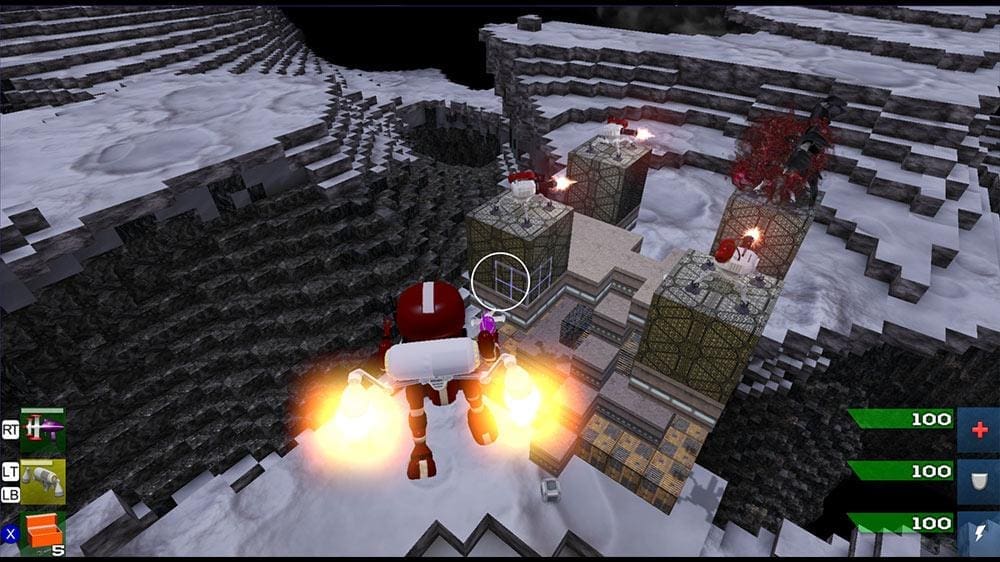 Thunder Moon is an Xbox Live Indie Game that came out on June 7th, and I am more than impressed with this title. In this sci-fi action adventure game, you play as a red and white robot whose spaceship crash lands on the moon. You then have to work to repair your spaceship, but you have to battle many of the moon’s inhabitants. From Draxen Flyers that shoot projectiles at you, to Draxen Scav, which are ugly crab like creatures, to Draxen Soldiers that are even bigger uglier crabs… there are a lot of creatures that try to kill you.

There are three game modes in Thunder Moon and if you just want to discover the moon without being attacked, you can play Explore. Survive mode is the same as Explore, but with plenty of enemies that try to kill you. I do like Survive mode, but I think that both of these might get a bit boring after a while. My favorite mode in Thunder Moon, however, is Story. Story mode has tasks and chapters to progress through, which is a lot of fun. You collect parts for your spaceship, repair various objects, and many other objectives. All of the modes overall are pretty great. You can build objects, mine for resources, and craft weapons. This game is very much like Minecraft, but on the moon. Where it really differentiates itself from Minecraft is in some of the amazing game features.

The various features in this game are what make it so unique and amazing. One of the basic features that I really like is health, shield, and jet pack regeneration (yes, you can fly with a jetpack; I will get to that in a second). You do not have to eat or use a med kit to regenerate your health, as it regenerates itself after a short time. That does not mean you can rely on the regeneration to trek through the game, though. You have to deal with all of the enemies at some point, because every time you turn around, there will be some crabs and flying guys out to get you. Every time you complete an objective, there will be some new enemies after you as well. They are relatively easy to defeat, but when they come in numbers, they do offer a good challenge. To go along with this, the weapons are great. You have a pistol, an atomizer, and a flare gun. These guns do not last forever, as they wear down after use, and as you play, you gather resources to craft new guns. This is a really cool feature of the game. The crafting is very deep and intricate, and it works well. Okay – Remember when I mentioned you have a jetpack? Yeah, you have a jetpack, and it’s awesome.  It does have a relatively short use time, but it’s usually enough when you need it. Other than flying around, my favorite thing about the jetpack is when you fall or jump down a crevice. As you reach the ground, the jetpack turns on and eases your landing automatically instead of taking fall damage. This is amazing. It’s something that didn’t have to be in the game, but it’s great that it is. My final and perhaps favorite feature of this game is the hover bike. Wow… this is just awesome! Instead of walking from objective to objective, you can fly there in half the time. The flying mechanic works very well and is extremely fun. There is also a light at the end of the hover bike that helps you see where you’re going, and helps you look down dark crevices. This feature is the cherry on top of this amazing indie game. I was very impressed by Thunder Moon. The enemy AI is great, as they can team up on you. The jetpack and hover bike are great features for traversing the moon. Crafting works extremely well and is a lot of fun. The game modes work well and they all offer something different. The graphics are surprisingly good. Even the music in the game is great. There are only a few things that I didn’t like, or perhaps wanted in this game…

The first thing I would have liked is a multiplayer or co-op mode, because this game would be even better if you could play with or against a friend. The only other thing I would have liked is a map. As you try to find your next objective, there is a red marker that tells you where you are supposed to go. However, I would have just liked a map that lays out the land and maybe marks where I’ve been. Overall though, this game is great. You can tell there was a lot of work put into it, and it pays off.

After you finish reading this, go and download the game, as it is available for download on the Xbox Live Indie Game Marketplace. Oh, and I almost forgot to mention my favorite part of the game. It is a whopping… hold on… wait for it… *drum-roll*… ONE DOLLAR. I challenge you to find a deeper, more complex and amazing game for a buck. If you’re looking for some cheap fun… download this game.  You won’t be disappointed!.

One of the best Indie Games on the 360 IMHO