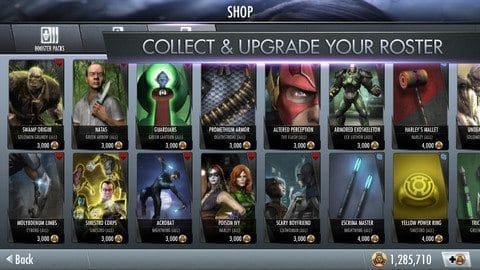 We are only a couple of days away from the release of NetherRealm Studios “Injustice: Gods Among Us” and I can’t tell you how excited we here at GNN are. The demo is out already and I have been hearing nothing but good things about it (I don’t plan on playing it since I don’t wanna spoil it for myself). Anyway, NetherRealm Studios is happy to announce an iOS version of the game that actually will unlock content for the main game and is available to download right now! Below you can read the press release, feast on some screen shots and a video overview courtesy of IGN.

Warner Bros. Interactive Entertainment and DC Entertainment have announced that the Injustice: Gods Among game for iPad, iPhone, and iPod touch is now available on the App Store. Developed from the ground up by award-winning NetherRealm Studios, this free-to-play mobile game delivers stunning graphics and a completely unique fighting gameplay experience created especially for Apple devices.

The Injustice: Gods Among Us mobile game features a collectible card mechanic and engages players in 3-on-3 tag team combat that pits many of DC Comics’ most popular icons such as Batman, Superman, The Flash, Wonder Woman, Green Arrow, Aquaman, and more against one another. Fans who also own the forthcoming Xbox 360 and PlayStation 3 versions will be able to unlock content in the console versions that will be available in the mobile game, and vice versa, by registering for a Warner Bros. ID (WBID) account and playing the game.

“The team at NeatherRealm Studios created a custom mobile experience for Injustice: Gods Among Us on the iPad, iPhone, and iPod touch that delivers gameplay mechanics created specifically for the platform” said Ed Boon,” Creative Director, NetherRealm Studios. “We’re excited to offer fans a new way to play fighting games that can be enjoyed alone or as a companion experience to the console versions.”

Another interesting tidbit was a Warner Bros. employee, Brandon Alexander, tweeted (and took within minutes) out a screenshot of the selection screen. However, from the looks of it, Ares and Killer Frost will both be playable characters in the game. Check out the screenshot below: [UPDATE] GameSpot released a game play trailer today showcasing Ares and Killer Frost going at it. Check it out below:

Mantecoza: A behind the scenes Experience